The Yemeni Air Force (Arabic language: القوات الجوية اليمنية‎; transliterated: al-Quwwat al-Jawwiya al-Yamaniya) is the air operations branch of the Yemeni Armed Forces. It is equipped with both eastern and western types of aircraft. Numbers of aircraft can not be confirmed but servicibility of these aircraft is low. Aircraft have been acquired by donations from other countries or either supporting both the Soviet Union or the USA during the cold war.

The Yemen Air Force, known as al-Quwwat al-Jawwiya al-Yamaniya, was established in 1926. During the mid-1950s, the Imam of Yemen established a private fleet that was run by the military. Later, the Soviets delivered MiG-15 and MiG-17 fighters, followed by MiG-21s to the South Yemen Air Force. The northern Yemen Arab Republic (YAR) had ties with Western-oriented countries, and they supported a new air force. In the 1970s, Saudi Arabia donated F-5E and F-5B fighters, and two C-130H Hercules Transport aircraft. The Yemen Arab Republic Air Force (YARAF) aircraft markings are the basis of the current roundel and flag, which come from the North Yemen's support of the United Arab Republic between 1958 and 1961.

The South Arabian Air Force (as an air corps of the Federation of South Arabia under British protection) was supported by the British and received BAC 167 Strikemaster Mk81s, DHC-2 Beavers, Jet Provost Mk52As and Bell 47G helicopters. The PRSY/PDRY AF (as an air corps of the independent Southern Yemen after Nov. 1967) aircraft markings were a light blue triangle with a dark outer part and a red star in the center while the fin-flash consisted of a flag in the national tricolour with a blue triangle bearing a red star. This was used as the fin-flash until the unification of Yemen in 1990.

Yemen's air force was created in 1990 when the south and north unified in 1990. Yemen is planning to buy more MiG-29s. Yemen's new MiG-29s were modified by Yemen to also attack air and land units. They have been proven effective and have powerful payloads. The new MiGs have been used against terrorists and has also proven to be effective in the Sah'da conflict. Many of the aircraft used by Yemen are from South Yemen and only a small percentage from North Yemen due to the fact South Yemen was allies with the Soviets in the Cold War. After the fall of the Soviet Union, South Yemen stopped receiving Soviet made fighters. Yemen has used fighters and bombers,mainly in the 1994 civil war to bomb the city of Aden. There were also reports of EEG (English Electric Lightning) fighters in the North Yemen civil war. They were used by Saudi Arabia since Yemen never owned EEG fighters.

Yemeni Air Force has been used extensively in the Sadah War. The Yemeni Air Force has been proven effective destroying enemy positions and buildings. Most enemy casualties were attributed to air raids. A number of accidents have occurred, including one in which a fighter plane accidentally fired a missile and killed more than 80 civilians. During Operation Scorched Earth on 2 and 5 October and on 8 November 2009, three fighter jets reported as a MiG-21, a Su-22 and a Sukhoi respectively crashed during military missions. The government claimed the crashes were due to technical problems malfunctions, while the rebels claimed they shot them down with MANPADS.[6]

As part of the Yemeni al-Qaeda crackdown, the Yemeni Air Force have launched air raids on terrorist bases throughout Yemen to kill important terrorist leaders. The raids were confronted with antiaircraft fire.[7]

The Yemeni Air Force performed air strikes against opposition forces to the Saleh government during the 2011 Yemeni uprising. On 28 September 2011, a Su-22 was shot down during a bombing mission north of Sanaa by rebel soldiers using so called "advanced air defenses", possibly a MANPADS.[8] The pilot ejected and was captured.

On 30 October, the al-Daylami air base near Sanaa was attacked by uprising forces. Different official sources reported two or three fighter jets destroyed on the ground either by mortar shells or with planted explosive charges.[9] The aircraft were loaded with ammunition and combat ready for strikes on the next day. Among the destroyed aircraft it was reported at least one MiG-29.[10]

Up to more than six hundred SAM vehicles in service. 12 Tor missile systems were ordered and tested in 2007.[12] 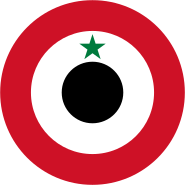