The Women's Auxiliary Air Force (WAAF), whose members were invariably referred to as WAAFs /ˈwæfs/, was the female auxiliary of the Royal Air Force during World War II, established in 1939. At its peak strength, in 1943, WAAF numbers exceeded 180,000, with over 2,000 women enlisting per week.

A Women's Royal Air Force had existed from 1918 to 1920. The WAAF was created on 28 June 1939, absorbing the forty-eight RAF companies of the Auxiliary Territorial Service which had been formed since 1938.[1] Conscription of women did not begin until 1941. It only applied to those between 20 and 30 years of age and they had the choice of the auxiliary services or factory work.

WAAFs did not serve as aircrew. The use of women pilots was limited to the Air Transport Auxiliary (ATA), which was civilian. Although they didn't participate in active combat, they were exposed to the same dangers as any on the "home front" working at military installations. They were active in parachute packing and the crewing of barrage balloons in addition to performing catering, meteorology, radar, aircraft maintenance, transport, communications duties including wireless telephonic and telegraphic operation. They worked with codes and ciphers, analysed reconnaissance photographs, and performed intelligence operations. WAAFs were a vital presence in the control of aircraft, both in radar stations and iconically as plotters in operation rooms, most notably during the Battle of Britain. These operation rooms directed fighter aircraft against the Luftwaffe, mapping both home and enemy aircraft positions.[2]

WAAFs were paid two-thirds of the pay of male counterparts in RAF ranks.

By the end of World War II, WAAF enrollment had declined and the effect of demobilisation was to take thousands out of the service. The remainder, now only several hundred strong, was renamed the Women's Royal Air Force on 1 February 1949.

Initially, the WAAF used the ATS ranking system, although the director held the rank of "Senior Controller" (equivalent to Brigadier in the British Army, Air Commodore in the RAF) instead of "Chief Controller" (equivalent to Major-General, Air Vice-Marshal) as in the ATS. However, in December 1939 the name was changed to Air Commandant, when the ranks were renamed and reorganized, other ranks now held identical ranks to male RAF personnel, but officers continued to have a separate rank system, although now different from that of the ATS. From February 1940 it was no longer possible to enter directly as an officer; from that time all officers were appointed from the other ranks. From July 1941 WAAF officers held full commissions. On January 1, 1943, the rank of Air Chief Commandant (equivalent to Major-General, Air Vice-Marshal) was created with the director's appointment to that rank.

Several members of the WAAF served with the Special Operations Executive during the Second World War.

Nursing Orderlies of the WAAF flew on RAF transport planes to evacuate the wounded from the Normandy battlefields. They were dubbed Flying Nightingales by the press.[5] The RAF Air Ambulance Unit flew under 46 Group Transport Command from RAF Down Ampney, RAF Broadwell, and RAF Blakehill Farm. RAF Dakota aircraft carried military supplies and ammunition so could not display the Red Cross.

Training for air ambulance nursing duties included instruction in the use of oxygen, injections, learning how to deal with certain types of injuries such as broken bones, missing limb cases, head injuries, burns and colostomies; and to learn the effects of air travel and altitude.[6]

In October 2008 the seven nurses still living were presented with lifetime achievement awards by the Duchess of Cornwall.[7]

HRH Princess Alice, Duchess of Gloucester Commandant of the WAAF 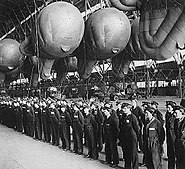