In the military science of fortification, wire obstacles are defensive obstacles made from barbed wire, barbed tape or concertina wire. They are designed to disrupt, delay and generally slow down an attacking enemy. During the time that the attackers are slowed down by the wire obstacle (or possibly deliberately channelled into killing zones) they are easy to target with machinegun and artillery fire. Depending on the requirements and available resources, wire obstacles may range from a simple barbed wire fence in front of a defensive position, to elaborate patterns of fences, concertinas, "dragon's teeth" and minefields hundreds of metres thick.

One example is "low wire entanglement", which consists of irregularly placed stakes that have been driven into the ground with only some 15 cm (six inches) showing. The barbed wire is then wrapped and tightened on to these. An enemy combatant running through the barrier, which is difficult to see, is apt to trip and get caught.

Wire obstacles may have originated with Union General Ambrose Burnside during the American Civil War Battle of Fort Sanders in the Knoxville Campaign, when telegraph wire was strung between tree stumps 30 to 80 yards in front of one part of the Union line. They first saw significant military use during the Second Boer War, and reached their pinnacle during World War I where, together with machine guns, they were responsible for many casualties in the trench warfare that dominated that conflict and gave the defending side substantial advantage.

World War I entanglements could in some places be scores of metres thick and several metres deep, with the entire space filled with a random, tangled mass of barbed wire. Entanglements were often not created deliberately, but by pushing together the mess of wire formed when conventional barbed wire fences had been damaged by artillery shells.

Whenever there was time and opportunity to plan and emplace wire obstacles during the First World War, it was standard practice to deploy designs that would channel and concentrate attacking troops, herding them like cattle into designated killing zones i.e. fixing multiple screw pickets of wire running diagonally, away from the protected zone. This meant that a belt-fed machine-gun such as the Maschinengewehr 08 sighted along that diagonal line had easy targets to enfilade when attacking troops were blocked from advancing by the wire and then massed together in a line. Another method was to deliberately leave attractive-looking gaps in wire obstacles to give the appearance of a weak link in the defences. Such gaps were designed to act like a funnel, luring attacking troops through the opening and straight into the concentrated direct and enfilade fire of different machine gun emplacements. Because multiple water-cooled machine-guns such as the Vickers gun were used, continuous fire could be sustained for hours at a time if required.

A method for attacking soldiers to conquer this threat was a small wheeled steel plate that was slowly pushed forward in front of the soldier to shield them from bullet fire as they crawled across the ground towards the obstacle. When the obstacle was reached, access holes in the shield allowed the attacking soldier to cut away at the wire obstacle with pliers from behind the protection of the armored shield.[1]

Relatively elaborate obstacles were also used in some phases of the Korean War, and continue to be used on the Korean Demilitarized Zone, and a few other borders. However the more fluid nature of modern war means that most obstacles used today are relatively simple, temporary barriers.

Tanks and light armored vehicles can generally flatten unmined wire obstacles, although the wire can become entangled in the tracks and immobilize the vehicle. This can also occur to wheeled vehicles once the wire becomes wrapped around the axle. Wire obstacles can also be breached by intense artillery shelling or Bangalore torpedoes.

The effectiveness of any wire obstacle is greatly increased by planting anti-tank and blast antipersonnel mines in and around it. Additionally, connecting bounding anti-personnel mines (e.g. the PROM-1) to the obstacle with tripwires has the effect of booby-trapping the obstacle itself, hindering attempts to clear it. Dummy tripwires can be added to cause further confusion. If anti-personnel mines are unavailable, it is very easy to connect hand-grenades to the wire using trip-wires. If the use of lethal explosive devices is deemed to be unsuitable, it is easy to emplace trip-flares in and around the wire obstacle in order to make night-time infiltration harder.

The "knife rest" or "Spanish rider" is a modern wire obstacle functionally similar to the cheval de frise, and sometimes called that. 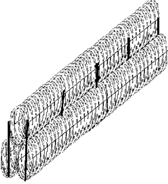 A complex obstacle belt of low wire entanglement backed by a double apron fence. Both obstacles have movable openings that can be blocked with knife rests.

The deadly result of enfilade fire during the Dieppe Raid of 1942: dead Canadian soldiers lie where they fell. Trapped between the beach and fortified sea wall (covered with barbed wire), they made easy targets for MG 34 machineguns in a German bunker. The bunker firing slit is visible in the distance, just above the German soldier's head.

Juno Beach on D-Day, 1944. The barbed wire fence is crude and not very high. However, when combined with the steep, curving sea wall it slows down any attacker, giving time for a nearby machinegun bunker (out of view) to sweep the area with enfilade fire. Note the soldier in the background, forced to use a ladder.