William Bainbridge (May 7, 1774 – July 27, 1833) was a Commodore in the United States Navy. During his long career in the young American Navy he served under six presidents beginning with John Adams and is notable for his many victories at sea. He commanded several famous naval ships, including the USS Constitution and saw service in the Barbary Wars and the War of 1812. Bainbridge was also in command of the USS Philadelphia when it grounded off the shores of Tripoli in North Africa, resulting in his capture and imprisonment for many months. In the latter part of his career he became the U.S. Naval Commissioner.

William Bainbridge was born in Princeton, New Jersey, eldest son of Dr. Absalom Bainbridge and Mary (Taylor) Bainbridge.[1] His father, a loyalist during the American Revolution, served as a surgeon in the British Army and was convicted of high treason by the State of New Jersey and successfully filed for damages with the American Loyalist Claims Commission. He had two brothers: Joseph, who also became a Navy captain, and John T.; and a sister, Mary. He was raised by his maternal grandfather, John Taylor, Esq., of Middleton, New Jersey as his father left for England in 1783 and his mother remained behind due to her ill health (though his father returned to the United States and died in New York City in 1807).[2][3]

In his teens William Bainbridge was already of athletic and manly build and had an energetic and adventurous spirit. He was trained as a seaman in ships in the Delaware river, then considered the best 'school' for seamanship because of the great skill required to navigate that river.[4] Bainbridge served aboard the small merchant ship Cantor in 1792.[5]

In 1796 after returning from Brazil, Bainbridge served aboard the merchant ship Hope, a small vessel of 140 tons with four nine-pound guns. While in port in the Garonne river at Bordeaux preparing for his fourth voyage, Bainbridge, after being hailed for help from a nearby ship, put down a mutiny while outnumbered by seven seaman. In the effort Bainbridge was badly wounded nearly losing his life. For his courage and in recognition of his navigational and seaman skills he was made commander of that ship in 1796 at the age of nineteen.[6]

After leaving France that same year he sailed to the Caribbean. While in port at St. Johns, Bainbridge was hailed by an English schooner, but refused to stop. The English vessel fired guns in response where Bainbridge and his crack crew quickly turned about and with only two guns to a broadside, inflicted enough damage that forced the enemy ship to strike colors and surrender.[6][7][8]

Service in US Navy

Bainbridge saw service in several wars and commanded a number of famous early U.S. Navy vessels including the USS George Washington, the USS Philadelphia and the USS Constitution, ultimately becoming a member of the board of naval commissioners during the latter part of his long naval career.

With the organization of the United States Navy in 1798, Bainbridge was included in the naval officer corps and in September 1798 was appointed commanding Lieutenant of the schooner USS Retaliation. He was ordered to patrol the waters in the West Indies along with Captain Williams of the Norfolk, both of whom were under the command of Murray who was in command of the frigate Montezuma.[9] On November 20, 1798, Lt. Bainbridge surrendered the Retaliation without resistance to two French frigates, the Le Volontier, with 44 guns and l'Insurgente bearing 40 guns, after he mistook them for British warships and approached them without identifying them.[10] Bainbridge and his crew were taken aboard the Volontier where the two French frigates continued in their pursuit of other nearby American vessels. During the flight to capture the Americans, Bainbridge offered words of caution to the French commander of L' Insurgente, Captain St. Laurent, about American strength; this made St. Laurent wait for his consorts far behind him.[11] The Retaliation was the first ship in the nascent United States Navy to be surrendered. Bainbridge was not disciplined for this action.

In March 1799, Bainbridge was appointed Master Commandant of the brig USS Norfolk of 18 guns and ordered to cruise against the French.[12][13] 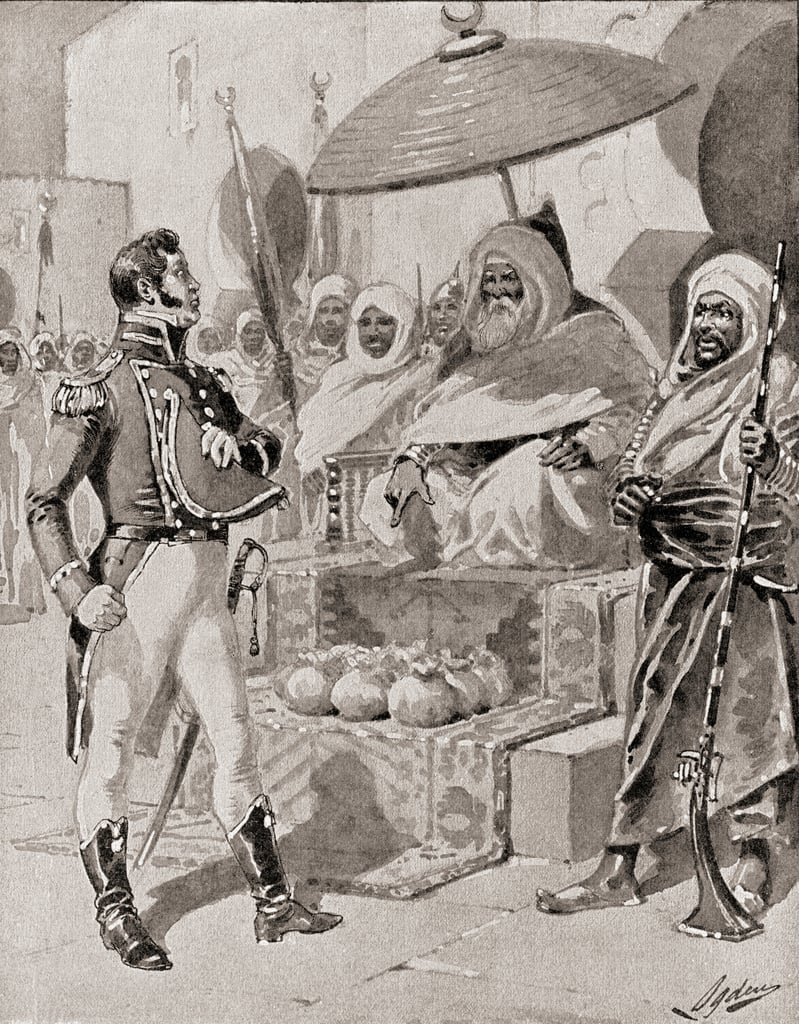 In 1800 during the months before the First Barbary War broke out, Bainbridge was given the ignominious task of carrying the tribute which the United States still paid to the Dey of Algiers to secure exemption from capture for U.S. merchant ships in the Mediterranean. Upon arrival in the 24-gun USS George Washington, he allowed the harbor pilot to guide him directly under the guns of the fort overlooking the harbor. Upon his arrival the Dey demanded that Bainbridge use his ship to ferry the Algerian ambassador and tributary gifts to Constantinople, and that he fly the Algerian flag during the journey. With the George Washington under the guns of the fort and surrounded by the Dey's warships and military personnel Bainbridge reluctantly complied for fear of imprisonment and raised the Algerian flag on his masthead and delivered gifts of animals and slaves to Constantinople.[14][15]

President Jefferson found that bribing the pirate Barbary states did not work, and decided to use force. On May 21, 1803, Bainbridge was placed in command of the USS Philadelphia, tasked with enforcing a blockade of Tripoli. Bainbridge mistakenly ran the ship aground on an uncharted reef on October 21, 1803. All efforts to refloat her under five hours of cannon fire from Tripolitan gunboats and shore batteries failed, and Bainbridge decided to surrender. Before doing so he ordered all small arms thrown overboard, the powder magazine flooded and the naval signal book destroyed.[16] Soon afterward, the ship floated free after high tide and was captured by the Pasha of Tripoli. Bainbridge and his crewmen were imprisoned in Tripoli for nineteen months.[17]

Lieutenant Stephen Decatur commanding the USS Intrepid executed a night raid into Tripoli harbor on February 16, 1804 to destroy the Philadelphia. Admiral Horatio Nelson is said to have called this "the most bold and daring act of the Age".[18][19]

The capture of the Philadelphia and its crew also motivated President Jefferson's decision to send William Eaton, a former Army officer, known for his brash and defiant diplomacy, to Tripoli in 1805 to free the 300 American hostages in what was the first U.S. covert mission to overthrow a foreign government. William Eaton established a group of about 20 Christian (eight of whom were U.S. Marines) and perhaps 100 Muslim mercenaries[citation needed] to begin the takeover of Tripoli starting with Derna. He managed to trek with the small detachment of Marines led by Presley O'Bannon and his mercenary force over 500 miles. Supported at sea by Isaac Hull, Captain of the USS Argus, in an effective "combined operation", Eaton led the attack in the Battle of Derna on 27 April 1805. The town's capture, memorialized in the "Marines' Hymn" immortal "to the shores of Tripoli" and the threat of further advance on Tripoli, were strong influences toward peace, negotiated in June 1805 by Tobias Lear and Commodore John Rodgers with the Pasha of Tripoli.

After four separate bombardments from Preble's squadron, Bainbridge was released from the prison in Tripoli on June 3, 1805 [20] and returned to the United States and received a warm welcome. Shortly thereafter a Naval Court of Inquiry tasked with looking into his surrender found no evidence of misconduct, and he was allowed to continue serving. On his release, he returned for a time to the merchant service in order to make good the loss of profit caused by his captivity. With the conclusion of the campaign against the Barbary states, the US Navy was downsized and nearly all of her frigates remained in port. Realizing war with the United Kingdom was imminent Bainbridge and Commodore Stewart hastened to Washington to urge President Jefferson and Congress to strengthen the country's naval forces. They concurred with this timely advice and Congress forced a change to this policy that had led the current naval force to decay in early 1809. Satisfied with the results Bainbridge returned to Boston and took command of the navy yard at Charleston.[21]

Bainbridge took command of the frigate USS President in 1809 and began patrolling off the Atlantic coast in September of that year. Bainbridge was transferred to shore duty in June, 1810.[22]

On 15 September, shortly after the War of 1812 broke out between the United Kingdom and the United States, Bainbridge was appointed to command the 44-gun frigate USS Constitution, in succeeding Captain Isaac Hull.[23] The Constitution was a fine ship of 1,533 tons, which had already captured the HMS Guerrière. Under Bainbridge, she was sent to cruise in the South Atlantic.[24]

On 29 December 1812, Bainbridge fell in with the 38-gun HMS Java, off the coast of Brazil. The Java was a vessel of 1,083 tons, formerly the French frigate Renommée.[25][26] She had a crew of 400 men under Captain Henry Lambert[27] and was on her way to the East Indies, carrying the newly appointed Lieutenant-General Hislop of Bombay and his staff along with despatches to St. Helena, Cape of Good Hope and every British port in the Indian and China Seas.[28] She had an inexperienced crew with only a very few trained seamen, and her men had only had one day's gunnery drill. In addition to her crew, Java was carrying more than four hundred officers and seamen who were to join the British fleet in the East Indies, among them Captain John Marshall who was to take command of a sloop of war stationed there.[29] Under Bainbridge, the Constitution had a crack crew who were well drilled in gunnery; the crew of the Java was not. The Java was virtually cut to pieces, with its rigging almost completely destroyed, and was forced to surrender, while having inflicted little damage to the Constitution, other than removing Constitution's helm with a lucky shot. During the action, Bainbridge was wounded twice, but maintained command throughout; even replacing the missing helm on the Constitution with the one from the Java before she was destroyed and sank. To this day, the still-commissioned Constitution (anchored in Boston Harbor) sports the helm that Bainbridge salvaged from the Java. Java's crew was taken prisoner and put aboard the Constitution in the hold. Because of the heavy damage inflicted on Java and the great distance from the American coast, Bainbridge decided to burn and sink the British frigate.[29] On March 3, 1813, President Madison presented Bainbridge with the Congressional Gold Medal for his service aboard the Constitution.[30]

After the conclusion of the war with Britain, the United States engaged in the Second Barbary War of 1815 (also known as the Algerian War). It was the second of two wars fought between the United States and the Ottoman Empire's North African regencies of Tripoli, Tunis, and Algeria known collectively as the Barbary states. On March 3, 1815, the U.S. Congress authorized deployment of naval power against Algiers, and two squadrons were assembled and readied for war. Bainbridge served against the Barbary pirates and was commander of the US squadron sent to Algiers to enforce a blockade, show the extent of American naval resources and determination and enforce the neutrality and peace that was established by Stephen Decatur and William Shaler. The war ended in 1815.[31]

See also: Piracy in the Caribbean

In 1820, Bainbridge served as second for Stephen Decatur in a duel with James Barron that cost Decatur his life. Decatur's wife, along with many historians, believe that Bainbridge had actually harbored a long-standing resentment of the younger more famous Decatur and arranged the duel that made the likely wounding or killing of one or more duelists very likely.

Between 1824 and 1827, he served on the Board of Navy Commissioners.[32] He died in Philadelphia and was buried there at the Christ Church Burial Ground.