View source
This article is about white flags. For other uses, see White flag (disambiguation).

White flags have had different meanings throughout history and depending on the locale.

Flag of temporary truce in order to parley (negotiate)

The white flag is an internationally recognized protective sign of truce or ceasefire, and request for negotiation. It is also used to symbolize surrender, since it is often the weaker military party which requests negotiation. A white flag signifies to all that an approaching negotiator is unarmed, with an intent to surrender or a desire to communicate. Persons carrying or waving a white flag are not to be fired upon, nor are they allowed to open fire. The use of the flag to surrender is included in the Hague Conventions of 1899 and 1907.

The improper use of a white flag is forbidden by the rules of war and constitutes a war crime of perfidy. There have been numerous reported cases of such behavior in conflicts, such as fighters using white flags as a ruse to approach and attack enemies, or killings of fighters attempting to surrender by carrying white flags.

The first mention of the usage of white flags to surrender is made during the Eastern Han dynasty (A.D 25–220). In the Roman Empire, the historian Cornelius Tacitus mentions a white flag of surrender in A.D. 109. Before that time, Roman armies would surrender by holding their shields above their heads.[1] The white flag was widely used in the Middle Ages in Western Europe to indicate an intent to surrender. The color white was used generally to indicate a person was exempt from combat; heralds bore white wands, prisoners or hostages captured in battle would attach a piece of white paper to their hat or helmet, and garrisons that had surrendered and been promised safe passage would carry white batons.[2]

Its use may have expanded across continents, e.g. Portuguese chronicler Gaspar Correia (writing in the 1550s), claims that in 1502, an Indian prince, the Zamorin of Calicut, dispatched negotiators bearing a "white cloth tied to a stick", "as a sign of peace", to his enemy Vasco da Gama.[3] In 1625, Hugo Grotius in De jure belli ac pacis (On the Law of War and Peace), one of the foundational texts in international law, recognized the white flag as a "sign, to which use has given a signification;" it was "a tacit sign of demanding a parley, and shall be as obligatory, as if expressed by words."[4]

The Umayyad dynasty (661–750) used white as their symbolic color as a reminder of Muhammad's first battle at Badr, and to distinguish themselves from the Abbasids, by using white, rather than black, as their color of mourning. White is one of the pan-Arab colors because of that period.[citation needed]

During the period of the Ancien Régime, starting in the early 17th century, the royal standard of France became a plain white flag as a symbol of purity, sometimes covered in fleur-de-lis when in the presence of the king or bearing the ensigns of the Order of the Holy Spirit.[citation needed]

The white color was also used as a symbol of military command, by the commanding officer of a French army. It would be featured on a white scarf attached to the regimental flag as to recognise French units from foreign ones and avoid friendly fire incidents. The French troops fighting in the American War of Independence fought under the white flag.

The French Navy used a plain white ensign for ships of the line. Smaller ships might have used other standards, such as a fleur-de-lis on white field. Commerce and private ships were authorised to use their own designs to represent France, but were forbidden to fly the white ensign.

During the French Revolution, in 1794, the blue, white and red Tricolor was adopted as the official national flag. The white flag quickly became a symbol of French royalists. (It should be noted that the white part of the French Tricolor is itself originally derived from the old Royal flag, the tricolor having been designed when the revolution still aimed at Constitutional Monarchy rather than a Republic; this aspect of the Tricolor was, however, soon forgotten.)[citation needed]

During the Bourbon Restoration, the white flag replaced the Tricolor, by then seen as a symbol of regicide.

It was finally abandoned in 1830, with the July Revolution, with the definitive use of the blue, white and red flag.

In 1873, an attempt to reestablish the monarchy failed when the comte de Chambord refused to accept the Tricolor. He demanded the return of the white flag before he would accept the throne, a condition that proved unacceptable. 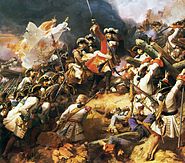 French white regimental flag at the battle of Denain (1712).

A French ship of the line at the Battle of Martinique (1780).

French ships (left), flying the white flag of the Monarchy, at the battle of Chesapeake (1781).

The surrender of Lord Cornwallis to French (left) and American (right) colonial forces after the battle of Yorktown (1781).

In 1863, the Confederate States of America adopted a new flag that played on the popularity of the Confederate Battle Flag, using a pure white field with the Battle Flag displayed in a canton in a position equivalent to the stars on the Flag of the United States. The design lasted for nearly two years (until March, 1865), when concerns about it being mistaken for a flag of truce when the flag was not completely flying necessitated the addition of a broad red band on the fly edge.

The Christian Flag, designed in the early 20th century to represent all of Christianity and Christendom, has a white field, with a red Latin cross inside a blue canton. In conventional vexillology, a white flag is linked to surrender, a reference to the Biblical description Jesus' non-violence and surrender to God's will.[5]

In FIA sanctioned races, a white flag warns of a slow car ahead. In non FIA races a white racing flag is displayed from the starter's tower indicates that the race leader is running his/her final lap. The white flag can be pointed at the race leader to avoid confusion of other drivers. Drivers may wave a small white flag after a collision to indicate that they are uninjured.

In NASCAR and other racing leagues a white flag symbolizes one lap to go. After this the checkered flag is waved. NASCAR sometimes has finishes that are coined as "Green. White. Checkered" finishes because the order of the flags waved lap after lap before the finish.

In Buddhist countries, white is the colour of mourning, so a white flag is used where other cultures might fly a black flag.

Plain white flag of the Islamic Emirate of Afghanistan, used 1996–1997.

During the Afghan Civil War, the Taliban used a plain white flag. When it took over Kabul in 1996, and established the Islamic Emirate of Afghanistan, the white flag became the national flag of the country, representing "the purity of their faith and government". After 1997, the Taliban added the Shahadah to the flag.