Weapons of Honour (French: Armes d'honneur) are ceremonial weapons awarded for service or assistance to France.

Established on 25 December 1799 and issued by the French Consulate, weapons of honour were awarded as military awards for feats of arms. The civilian version of this distinction is the scarf of honour (l'écharpe d'honneur). This completed and materialised the practice of solemnly declaring a citizen of group of citizens to have bien mérité de la Patrie. Weapons of honour were replaced during the First French Empire by the institution of the chivalry Order of the Legion of Honour. Recipients of weapons of honour automatically received the Legion of Honour after its inception.

Each component of the Napoleonic armies had its own distinction and weapons of honour: 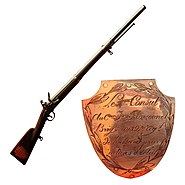 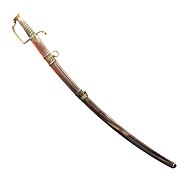 Sabre of honour: "The First Consul to citizen Antoine Vigne, maréchal des logis at the 5th regiment of mounted chasseurs". 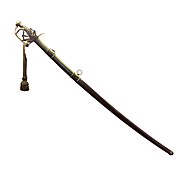 Sabre of honour: "The First Consul to citizen Rénade Conrot, maréchal des logis at the 5th regiment of mounted chasseurs".

Sabre of honour: "The First Consul to citizen Joseph Davance, sous-lieutenant of the 10th light infantry regiment, for outstanding deed".