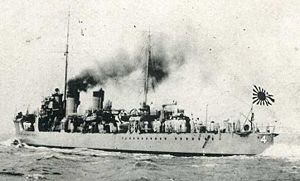 The medium-sized Wakatake-class destroyers were a follow-on to the Momi-class destroyer as part of the Imperial Japanese Navy's 8-6 Fleet Program from fiscal 1921 as a lower cost accompaniment to the larger Minekaze-class destroyers. The class was originally planned to consist of twenty-three vessels, but due to the Washington Naval Treaty, as well as budgetary limitations, the final number was reduced to eight. The Wakatake class was the last class to be rated “second class” and all future destroyers were designed larger.[2] It was planned that the Wakatake-class ships should have names, but upon completion they were given numbers. This proved to be extremely unpopular with the crews and was a constant source of confusion in communications, so in 1928, names were assigned.[3]

The Wakatake-class destroyers were essentially slightly modified Momi-class ships with a deeper draft to improve handling characteristics in heavy seas, particularly against rolling. Weaponry layout, general arrangement and silhouette were all identical with the Momi class.

As with the Momi class, a number of types of turbine engines were used for propulsion. Asagao was built with Parsons impulse turbines, Yūgao with Escher Wyss & Cie Zoelly turbines, and the remaining vessels with Brown-Curtis turbines.

The small displacement and shallow draft of the Wakatake class limited their utility as fleet escorts. As with the Momi class, in the 1920s and 1930s, they were mainly used in Chinese coastal waters.[4]

On September 15, 1932 Sawarabi capsized due to poor stability and sank north of Keelung near Taiwan.

In April 1940 Yūgao was re-rated as Patrol Boat No. 46, with considerably reduced armament.

Six of the eight Wakatake-class destroyers still operating as destroyers on the eve of the Pacific War, equally divided between the 13th and 32nd Destroyer Divisions. Desdiv 13 comprised Wakatake, Kuretake, and Sanae, and was assigned to the Kure Naval District. These ships were charged with antisubmarine patrols in the waters of the Inland Sea, Bungo Strait, and western Kyūshū. Desdiv 32 with Asagao, Fuyō and Karukaya came under the Chinkai Guard District and spent the war's early months screening maritime traffic in the Tsushima Straits.

On April 10, 1942, the 1st Surface Escort Division of the Southwest Area Fleet was created, and Desdivs 13 and 32 were assigned to it to provide protection for convoys against Allied submarine activity. The convoy routes were initially those between Moji, Taiwan, and the Philippines. Later, these routes extended to Singapore, French Indochina, the Netherlands East Indies, and Palau. In the course of this service Karukaya set a record by successfully completing 54 convoy escorts before her loss.

Of the six destroyers, four were lost to American submarines, and one to an air attack. Only Asagao survived the war and was finally broken up in 1948.[5]

The IJN originally planned that the Wakatake class ships should have names, but upon completion they were given numbers due to the projected large number of warship the IJN expected to build through the Eight-eight fleet plan. This proved to be extremely unpopular with the crews and was a constant source of confusion in communications. In August 1928, names were assigned, but not the original names that were planned.