Vijay Stambha ("Kirttistambha") is an imposing victory monument located in Chittorgarh fort in Chittorgarh, Rajasthan, India. This tower is the pièce de résistance of Chittorgarh. It was constructed by Mewar king Rana Kumbha in 1448 to commemorate his victory over the combined armies of Malwa and Gujarat led by Mahmud Khilji. The tower is dedicated to Vishnu.[1]

The 37.19 m high 9-storied tower is one of the most remarkable in India. It is built partly of red sandstone and partly of white marble and is enriched by numerous images of Hindu gods and goddesses with inscriptions at the bottom of each. It is believed that the tower took 10 years to be completed. This exemplary piece of architecture stands on a pedestal 10 feet high. Each of the nine stories are distinctly marked with openings and balconies at every face of each story. The interior staircase winds alternately through the central chamber and surrounding gallery. The construction was supervised by Sompura architects originally from Patan.[citation needed]

The inscribed slabs in the uppermost story containing a detailed genealogy of the rulers of Chittaur and their deeds is ascribed to Ran Kumbha court scholar, Atri and his son Mahesh. The names of the architect, Sutradhar Jaita and his three sons who assisted him, Napa, Puja, and Poma, are carved on the fifth floor of the tower.[1]

The entire tower is covered with architectural ornaments and inscribed images of gods and goddesses, seasons, weapons, musical instruments, etc. Its inscribed sculpture are a veritable text-book of Hindu iconography. There are around 157 narrow steps leading to the terrace from where one can have a beautiful view of Chittorgarh town and the fort. The uppermost floor has been sealed off and is no longer accessible to visitors.[citation needed]

The tower is a remarkable example of religious pluralism practised by the Rajputs. The topmost storey features an image of the Jain Goddess, Padmavati. Rana Kumbha also had the word Allah carved in Arabic nine times in the third storey and eight times in the eighth.[2][3]

The Vijaya Stambha is said to be the home of the Á Bao A Qu, as described in the Book of Imaginary Beings by Jorge Luis Borges.[citation needed]

The Jain Kirti Stambha in the fort dates from the 13th century and is thus about two centuries older. It served as a model.[citation needed] 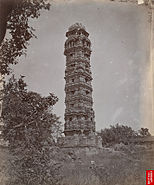 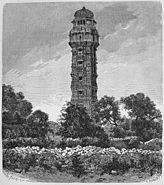 Water colour painting of the tower (1878)