On March 8, 1949, after the Elysee accords, the State of Vietnam was recognized by France as an independent country ruled by Vietnamese Emperor Bảo Đại. The Vietnamese National Army or Vietnam National Army (Vietnamese language: Quân đội Quốc gia Việt Nam , "National Army of Vietnam", French language: Armée Nationale Vietnamienne, "Vietnamese National Army") was the State of Vietnam's military force created shortly after that. It was commanded by Vietnamese General Hinh and was loyal to Bảo Đại. The VNA fought in joint operations with the French Union's French Far East Expeditionary Corps against the communist Viet Minh forces led by Ho Chi Minh. Different units within the VNA fought in a wide range of campaigns including but not limited to the Battle of Na San (1952), Operation Hautes Alpes (1953), Operation Atlas (1953) and the Battle of Dien Bien Phu (1954).

With the departure of the French Far East Expeditionary Corps (CEFEO) from Indochina in 1956, following a French-American secret war in South Vietnam,[2] and subsequent end of France's influence in the area replaced by the United States (Ngo Dinh Diem and the Republic of Vietnam replaced Bảo Đại and the State of Vietnam), the VNA was reorganized to an Americanized version; which included the creation of the Army of the Republic of Vietnam.

While loyalist to the Chief of State of Vietnam Emperor Bảo Đại, the VNA fought along the French Union forces against the communist Viet Minh led by Ho Chi Minh during the First Indochina War until 1954 and the partition of Vietnam.

By 1956 all French Union troops withdrew from Vietnam and most of the VNA officers remained in service in the Army of the Republic of Vietnam. After the fall of Saigon breaking in 1975, some joined the French Foreign Legion and others exiled to France or the United States.

Benefiting with French cadres assistance and United States material support the VNA quickly became a modern army modeled after the CEFEO Expeditionary Corps.[4] Officers and Non-commissioned officers were trained in local schools of cadres known in French as Ecoles des Cadres, or at the elite National Military Academy of Dalat (EETD).[5]

In 1953, the cadres formation raised with 54 new battalion created and hundreds of new officers formed by early March.[6] By November the Vietnamese National Army was entirely enlisted of Vietnamese recruits from the Privates to Generals.[7]

On the other hand, until 1954 some Vietnamese were trained four months in an Infantry Instruction Centers (Centre d'Instruction de l'Infanterie, CII) based in southern Vietnam. Once licensed these recruits would not be part of the VNA but the French CEFEO. Other officer and NCO alumni were coming from all French Union including Cambodia, Overseas (Martinique, Reunion, French Guiana), metropolitan French and "French citizens" of French West Africa and India.[8][9]

His majesty Bảo Đại awarded the Hoang Dieu promotion Major and Second with a Saint-Cyr offered saber.[11] As a symbol of autodefense of the whole Vietnam by the VNA, the Major shot four arrows in each direction.[12]

Military ranks were organized after the French army's hierarchy. Shoulder patch insignia would have three, two or one bar or star.[13] Generals would have three stars while NCO officers with a straight bar (Sous-Lieutenant for "1st Lieutenant") were called Ong Mot ("Mister One") and those with two straight bars (Lieutenant for "2nd Lieutenant") were unofficially named Ong Hai ("Mister Two"). Since anyone working for the government was called Quan the rank Lieutenant soon replaced it, Quan Mot became Sous-Lieutenant, Quan Hai became Lieutenant and so forth.[14]

The Marine Troops corps was modelled after the French Troupes de Marine. Their particular Navy blue uniform with white gaiters is still used by the French Fusiliers Marins.

The GCMA airborne commandos (Groupe Commando Mixte Aéroporté, "Airborne Mixed Commando Group") were Vietnamese ethnic minorities or Laotian montagnard partisans led by paratrooper officers of the SDECE French intelligence agency. Some of them would be used as cadres in the North Vietnam Commandos (Commandos Nord Viêt-nam).

In 1951, French General de Lattre commander of the CEFEO ordered for the creation of the North Vietnam Commandos to Louis Fourcade. These remained operational until 1954 with Fourcade as the "Big Boss" (le Grand Patron) until June 21, 1953.

Their mission was to collect intelligence, perform hit-and-run ambushes and bring confusion in Viet Minh controlled areas (northern Vietnam) wearing enemy uniforms and using unconventional warfare such as guerrilla techniques.[16] These were based on both, GCMA director and famous counter-insurgency theorician Roger Trinquier's experience as French Jedburgh in World War II, and on Viet Minh POWs collaboration.

In 1949, after becoming the Head-of-State, Bảo Đại made the most controversial decision concerning the armed forces of the new State of Vietnam: recognizing all non-communist military forces in the country as independent armies within the VNA. These forces included: Viet Binh Doan, Bao Chinh Doan, Binh Xuyen (approximately 40,000 strong), Hoa Hao (30,000 men under different leaders) and Cao Dai (25,000 men). Doing so, Bảo Đại solved the problem of having to spread the army too thin in the war against the Vietminh. Furthermore, the independent forces did not need money from the central government since they either were self-financed through clandestine activities or they were armed and financed by Savani's 2e Bureau in Vietnam. The Binh Xuyen was an organized crime military force in Saigon that provided part of Bảo Đại's luxury life.

In 1955, with Lansdale's support, Prime Minister Diem ordered all forces to surrender their weapons and to be part of one army. Some groups joined willingly while others were attacked by the regular VNA. By late 1955, all these forces ceased to exist. Many of their ranks joined the NVA or the Vietminh, while others returned to a civilian life.[17]

Heavier equipment of the armoured cavalry was made of World War II vintage U.S. light tanks as they had the ability to be drop stripped and assembled by specialized engineering companies on location.

Viet Minh captured arms like German Karabiner 98k with bayonet, U.S. Browning MGs or Japanese "knee mortars" were sometimes used.[18] These arms would often be supplied to the guerrillas by China as captured material from the Chinese Civil War (the NRA had been supplied by both Nazi Germany and the USA) or left behind by the Japanese Southern Expeditionary Army Group after the Pacific War. 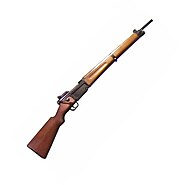 With the 1954 cease-fire, pro-French and optimistic General Nguyen Van Hinh stated that as early as 1955 "a Vietnamese division will be sent to France as compensation for sacrifices in Indochina by the latter. This great unit will participate in the defense of Europe as part of the opposition between the western and eastern blocks[1]

However the European Defence Community project was rejected by France and Nguyen Van Hinh's French counter-intelligence SDECE/GCMA-backed planned coup (scheduled for end October 1954) against pro-USA and CIA-backed (Edward Lansdale) Ngo Dinh Diem failed. The Vietnamese general was eventually dismissed, leaving South Vietnam in November 1954, following French general Raoul Salan's departure and return to France in October.[19][20] The French-American secret war and influence struggle in Vietnam engaging the SDECE against the CIA continued until 1956[2] when the CEFEO Expeditionary Corps was dissoluted and returned to France.

Both generals acknowledge the size of the new force would be insufficient to protect South Viet Nam against an external aggression, hence ultimate reliance is placed on the Southeast Asia Treaty Organization (Cold War era Asian equivalent to NATO) which France and the United States are members.

Famous units of the VNA are: