The British "Victory Bomber" was a Second World War design by Barnes Wallis at Vickers-Armstrongs at Brooklands for a bomber to carry his projected 22,000 lb (10,000 kg) "earthquake bomb" to strategic targets in Germany.

Aircraft designer Barnes Wallis reasoned that by selectively destroying strategic infrastructure targets, the German capacity to make armaments could be reduced. In 1940 Barnes Wallis designed a 22,400 lb (10,200 kg) "penetrating" bomb that was to bury itself in the ground before detonating. It was estimated that it could break dams like the Möhne if it exploded in the reservoirs within 150 ft (46 m) of the dam's face.[1]

No existing Royal Air Force (RAF) bomber could carry such a weapon, and he designed a huge six-engined bomber to drop the bomb from 40,000 ft (12,000 m). Wallis was an expert on geodetic airframe construction, having previously used it in designs such as the Wellesley (1935) and Wellington (1936), and naturally used it again for the Victory Bomber; also, all existing Vickers tooling was for this construction method. His specification was for a 50 ton (45 tonne) bomber that could fly at high altitude, 45,000 ft (14,000 m) being calculated to give the bomb maximum impact speed, at a speed of 320 mph (280 kn; 510 km/h) over a distance of 4,000 mi (3,500 nmi; 6,400 km). It would carry a single 22,400 lb (10,200 kg) "earthquake bomb". Defensive armament was minimal; speed and height would be its chief defence with one 4-gun turret in the tail position for any fighter aircraft that did attempt to reach it. The bomber would benefit by climbing to altitude while over Britain where fighter defences could protect it. The crew compartment was pressurized.

The limitation of the purpose of the aircraft to a single bomb did not endear it to the Air Ministry who required more flexibility of their aircraft, and the Air Staff rejected both the bomber and the bomb in May 1941, as the aircraft was unlikely to be completed before the war ended.[1]

The bomber design is not believed to have been developed beyond construction of a large wooden wind tunnel model which survives today at Brooklands Museum but the earthquake bomb idea was continued, initially as the smaller 12,000 lb (5,400 kg) Tallboy bomb, and then the larger 22,000 lb (10,000 kg) Grand Slam bomb, the carrying aircraft being a modified Avro Lancaster, whose performance improved during the war to the point where it could manage such a load.

There was further design work on large high flying bombers by the British during the war including 75 ton (68 tonne) and 100 ton (90 tonne) designs, but these did not progress either.[citation needed] 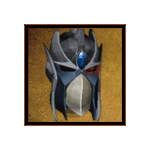