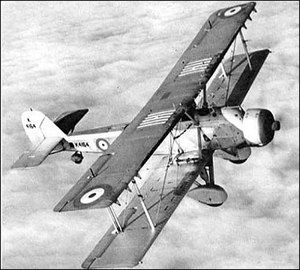 The Vickers Vildebeest[N 1] and the similar Vickers Vincent were two very large two- to three-seat single-engined British biplanes designed and built by Vickers and used as a light bomber, torpedo bomber and in the army cooperation roles. While first flown in 1928, it remained in service at the start of the Second World War, with the last Vildebeests flying against Japanese forces over Singapore and Java in 1942.

Designed against Air Ministry Specification 24/25 for the RAF, for a land-based torpedo bomber to replace the Hawker Horsley, the prototype Vildebeest, the Vickers Type 132, was first flown in April 1928, powered by a Bristol Jupiter VIII radial engine.[2] After initial evaluation, the Vildebeest was shortlisted for evaluation with the Blackburn Beagle and Handley Page Hare. As the Jupiter VIII was prone to vibration, a second prototype, the Vickers Type 204[3] was fitted with an Armstrong Siddeley Panther engine, and after further testing, the Vickers design was confirmed as the winner of the contest.[4] Engine problems continued, however, which were solved by fitting a new version of the Jupiter, which later became known as the Bristol Pegasus.[5]

The Vildebeest had an all-metal, fabric-covered airframe, with single-bay unstaggered wings. An initial production order was placed in 1931 for nine aircraft, with the first production aircraft flying in September 1932.[5] More production followed, with major production being of the Vildebeest III version, which added a third crewmember, with 150 built for the RAF. The Mark IV introduced the much more powerful (825 hp (615 kW)) Bristol Perseus sleeve valve radial engine enclosed in a NACA cowling, which significantly improved performance, maximum speed increasing to 156 mph (251 km/h) and rate of climb to 840 ft/min (4.3 m/s).[6] The Perseus had overheating problems, and was unsuitable for tropical service,[7] and production was limited to 18 aircraft, which served with the home based squadrons.[8]

In 1931, Vickers designed as a private venture a General Purpose version of the Vildebeest to replace the RAF's Westland Wapitis and Fairey IIIFs, supporting the Army in the Middle East. Successful trials were conducted in the Middle East, Sudan and East Africa with a converted Vildebeest I in the General Purpose role during 1932–1933, and Specification 16/34 was drawn up around the modified Vildebeest, which was named the Vickers Vincent. Differences from the Vildebeest were minimal, with the torpedo equipment replaced by provision for an auxiliary fuel tank instead. It had a three man crew, and was powered by a 660 hp (490 kW) Bristol Pegasus IIM3.[9] Between 1934 and 1936, 197 Vincents were built for the RAF or converted from Vildebeests.[10]

The Vildebeest was purchased in moderately large numbers by the Royal Air Force from 1931 and used as a torpedo bomber. It entered service with No. 100 Squadron at RAF Donibristle in Scotland in October 1932, replacing the Hawker Horsley.[11] Four front line torpedo-bomber squadrons were equipped with the Vildebeest, two at Singapore (100 Squadron, which moved from the United Kingdom in 1933 and 36 Squadron, which replaced its Horsleys in 1935), and two more in the United Kingdom.[12]

The Vincent entered service with No. 84 Squadron RAF at Shaibah, Iraq in December 1934, re-equipping General Purpose squadrons throughout the Middle East and Africa.[13] By 1937, it equipped six squadrons in Iraq, Aden, Kenya, Sudan, and Egypt.[14]

On the outbreak of the Second World War, 101 Vildebeests were still in service with the RAF. The two British based squadrons flew coastal patrol and convoy escort missions until being replaced by the Bristol Beaufort in 1940.[15] The two Singapore-based squadrons, however, were still waiting for their Beauforts when Japan invaded Malaya in December 1941, and the now obsolete biplanes had to be deployed against the Japanese attackers, attempting unsuccessfully to torpedo a Japanese cruiser off Kota Bharu on 8 December.[8][16] The Vildebeests continued to attack the Japanese as their forces advanced down Malaya, sustaining heavy losses from Japanese fighters, particularly when no fighter cover could be provided. On 26 January 1942, the Japanese landed at Endau, 250 miles from Singapore, and 12 Vildebeests of 100 and 36 Squadrons were sent to attack the landings. Despite an escort of Brewster Buffalo and Hawker Hurricane fighters, five Vildebeests were lost. The attack was repeated later that day by eight Vildebeests of 36 Squadron together with three Fairey Albacores, resulting in six more Vildebeests and two Albacores being shot down.[8][17][18] The surviving Vildebeests were withdrawn to Java on 31 January, and attacked another Japanese landing force off Rembang, claiming eight ships sunk, but sustaining further losses. The final two Vildebeests of 36 Squadron attempted to escape to Burma on 6 March, but were lost over Sumatra. The last Vildebeests in RAF service, operated by 273 Squadron at Ceylon were also retired in March 1942.[8][19]

While the Vincent had started to be replaced by more modern aircraft such as the Vickers Wellesley and Bristol Blenheim bombers, 84 remained in service with the RAF on the outbreak of the Second World War.[13] Vincents were used for bombing missions against Italian forces in the East African Campaign, and for coastal patrols from Aden, one attacking the Italian submarine Galileo Galilei, forcing it to surrender.[14] Other Vincents bombed Iraqi forces during the Anglo-Iraqi War of 1941.[20] The last front line Vincents retired in January 1943, with the type continuing in second line service (which included pesticide spraying against Locusts in Iran) until 1944.[14]

Kiwi Vildebeests were also used for photo mapping. A few were used for maritime patrols against German surface raiders, and Japanese submarines, (a handful were based in Fiji in December 1941), but the main war time role of the New Zealand aircraft was as particularly unwieldy pilot trainers, until replaced by North American Harvards in 1942.

A Vildebeest/Vincent composite airframe is being restored by the Royal New Zealand Air Force Museum at Wigram from the substantially complete remains of Vildebeest Mark III NZ102, but incorporating parts identified as coming from Vildebeest NZ105 and Vincents NZ355 and 357.[22] A Vincent (NZ311) has nearly completed restoration to static display by the Subritzky family near Auckland, New Zealand. A Spanish Vildebeest is rumoured to have survived.