Military Wiki
Register
Don't have an account?
Sign In
Advertisement
in: Articles which use infobox templates with no data rows, Articles incorporating text from Wikipedia, Military insignia,
and 7 more

Vice admiral is a senior naval flag officer rank, which is equivalent to lieutenant general and air marshal. A vice admiral is typically senior to a rear admiral and junior to an admiral. In many navies,[1] vice admiral is a three-star rank with a NATO Code of OF-8, although in some navies like the French Navy it is an OF-7 rank, the OF-8 code corresponding to the four-star rank of squadron vice-admiral.

Pennant of a French vice-amiral.

Romanian tunic shoulder board of a viceamiral

Vicealmirante of the Spanish Navy 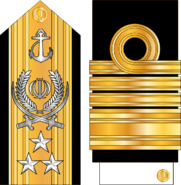 In the Royal Australian Navy, the rank of vice admiral is held by the Chief of Navy and, when the positions are held by navy officers, by the Vice Chief of the Defence Force, the Chief of Joint Operations, and/or the Chief of Capability Development Group.

Vice admiral is the equivalent of air marshal in the Royal Australian Air Force and lieutenant general in the Australian Army.

The rank insignia of a Canadian vice-admiral is as follows:

Two rows of gold oak leaves are located on the black visor of the white service cap. From 1968 to June 2010, the winter service dress tunic featured only a wide gold braid around the cuff with three gold maple leaves, beneath crossed sword and baton, all surmounted by a St. Edward's Crown located on cloth shoulder straps.

Vice-admirals are addressed by rank and name; thereafter by subordinates as "Sir" or "Ma'am". Vice-admirals are normally entitled to a staff car; the car will normally bear a flag, dark blue with three gold maple leaves arranged one over two.

A vice-admiral generally holds only the most senior command or administrative appointments, barring only Chief of Defence Staff, which is held by a full admiral or general. Appointments held by vice-admirals may include:

Charles, Prince of Wales holds the honorary rank of vice admiral in the Royal Canadian Navy.[11]

In France, vice-amiral is the most senior of the ranks in the French Navy; higher ranks, vice-amiral d'escadre and amiral, are permanent functions, style and position (in French rang et appellation) given to a vice-amiral-ranking officer. The vice-amiral rank used to be an OF-8 rank in NATO charts, but nowadays, it is more an OF-7 rank.

In India, vice admiral is a three star admiral.

In Italy, the equivalent to vice admiral is the ammiraglio di squadra.

In Vietnam, the equivalent to vice admiral is the phó đô đốc.