The purpose of V-hulls is to increase vehicle and crew survivability by deflecting an upward directed blast from a landmine (or Improvised Explosive Device) away from the vehicle, while also presenting a sloped armor face.[4][5] By presenting its armor at an angle, it increases the amount of material a ballistic projectile must pass through in order to penetrate the vehicle, and increases the chance of deflection.

V-hulls are incorporated in armored vehicle designs in several different ways. Many vehicles, such as the BAE Systems RG-33 incorporate the V-hull into a monocoque chassis, while others, such as the ATF Dingo and International MaxxPro use a body-on-frame chassis, with an armored V-hull crew compartment, and an additional V or semicircular shaped piece protecting the driveline.[6] Others, such as the Cougar H have a V-hull crew compartment, and allow the driveline and suspension components to be sacrificed in an attack, while maintaining the safety of the crew.

The Rhodesian Leopard security vehicle, one of the first V-hull vehicles.

A Casspir de-mining at the Bagram Airfield

Force Protection's Cougar with a V-shaped hull hit by IED in Iraq, all crew survived 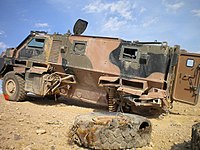 Intact hull after the drive train and utility bins were torn off after an IED to a Bushmaster IMV.

Terrängbil m/42 KP early V-hull vehicle and the first APC in the Swedish armed forces, in use between 1942 until early 1990. It saw combat during the Congo crisis.