The Véhicule de l'Avant Blindé or VAB ("Armoured Vanguard Vehicle" in French) is an armoured personnel carrier and support vehicle designed by the Euro Mobilité Division of GIAT Industries of France. It entered service in 1976; around 5,000 were produced.[3]

The VAB was designed as a wheeled troop transporter, complementing the tracked AMX-10P. Specifications for the project called for an NBC-proof, amphibious,[4] lightly armoured vehicle to provide infantry with basic protection against shrapnel and light infantry weapons. These features were dictated by its possible usage in the event of an all-out conventional war breaking out against the Warsaw Pact; in particular, the amphibious capabilities were needed to bridge the rivers in Eastern France and in Germany.[5] Companies Panhard and Saviem/Renault answered the requirement, and the Renault prototype was selected in May 1974,[6] with 4,000 units ordered. The first delivery occurred in 1976, and production continued at a rate of 30 to 40 units a month.[3]

A double armoured door at the rear allows access to the passenger compartment. Two inwards-looking, foldable benches provide space for 5 soldiers each. The crew enters the forwards compartment through two lateral hatches, the driver on the left, and the gunner of the right; two more hatches in the roof give access to armament and provide for emergency exit. The front windows are bullet-proof and heated, and can be further sheltered from incoming fire by armoured panels which can be either entirely shut, or leave a small slit for observation; the windows on the side and rear doors are covered by a similar system. The engine is located behind the driver, while the right side of the vehicle is kept free, providing a passageway between the crew and passager compartments.

Modern versions of the VAB have had more than 1,000 improvements compared to the initial version.[7] From 1998, the VABs in usage in the French Army underwent three major overhauls:

These overhauled vehicles are known as VAB Valorisé.

With a modest 13-tonne mass, the VAB can easily be airlifted for deployment abroad.[2] It is capable of tracking a 4-tonne trailer. The large wheels of the VAB allow it to sustain up to 60% grades, and road/rail canting of up to 30%.[8]

In 2003, Renault Trucks Défense took over marketing the VAB, as part of a commercial agreement with GIAT.

From 1990, the VAB NG (new generation) with improved armour and new engine was offered. At Eurosatory 2010, Renault unveiled, a new evolution, the VAB MkII, with more internal space, level 4 protection and a higher GVW.[9]

The armour upgrade of the VAB aimed at increasing from protection against light infantry weapons to protection against heavy machine guns, typically 12.7 mm projectiles. This increased the weight of the vehicles by about two tonnes, thereby losing its amphibious capabilities.

The amphibious design of the hull, the relatively light weight and the armour upgrade seem to give the VAB strong resistance against mines: when exposed to an explosion from below, the VAB tends to be lifted in the air, which allows most of the strength of the explosion to be dispersed away from the vehicle; furthermore, the shape of the hull and the disposition of the wheels deflect the shock wave, helping to maintain hull integrity.[5]

The heavy machine gun version of the VAB carries a M2 machine gun in an open turret; the light version sports an AA52 in a similar arrangement. In both cases, the crewman who mans the machine gun is protected from incoming fire only by an armoured panel on the front and by the two halves of the hatch door on the sides, giving him little protection against indirect fire, surprise attacks and explosions,[10] or if the VAB rolls over.[11] As of July 2007, all the personnel killed by mines aboard VABs had occupied the gunner position, though serious injuries were sometimes sustained by crewmen inside the hull.[5]

From 2007, repeated requests were issued by the Army head of staff for remotely-operated 12.7mm turrets to be fitted on these vehicles as a crash requirement.[12] A programme was launched, scheduling turret and battle command upgrades for over 500 VABs, now labeled VAB TOP (tourelle TéléOPérée). In early May 2008, Renault Trucks Defence signed an eight-year, 20 million euro contract with Kongsberg Gruppen of Norway, for equipping the VAB with subsidiary Kongsberg Defence & Aerospace's Protector (RWS) Remote Weapon Station.[13] Delivery are planned to range from 2009 to 2016.[7] About 60 VAB-TOP were deployed in Afghanistan from early 2009 onwards, and saw first combat during the Battle of Alasay. Field experience shows a significant drop in ammunition consumption with the tele-operated turret, whose computer allows the operator to fire efficient single shots, rather than bursts.[14] This somewhat alleviates concerns raised by the need to reload the turret from outside.[15]

Replacement of the VAB is scheduled for around 2020. A diesel-electric vehicle stemming from the EBM10-EBM20 programme is due to be selected. The Armoured Multirole Carrier has been cited as a strong contender.

VABs have been deployed in virtually all theatres where French infantry troops were present, notably Kuwait, Côte d'Ivoire, Yugoslavia, and Chad. VABs belonging to the Royal Moroccan Army ( FAR ) have seen heavy combat during the conflict with Polisario rebels of the Western Sahara. French troops supporting ISAF in Afghanistan also use the VAB. During the Uzbin valley ambush, a VAB was hit by a rocket propelled grenade, with no injuries. One soldier manning the rooftop machine gun of a VAB was later killed when the road collapsed under his vehicle and it rolled over.[16] In March 2009, a VAB driver was killed by a rocket attack during the battle of Alasay.[17]

The French Gendarmerie also uses a variant of the VAB, which replaced the VXB, called VBRG (Véhicule Blindé de Reconnaissance de la Gendarmerie) for riot control. This version may be equipped with a water cannon and/or a bulldozer blade. 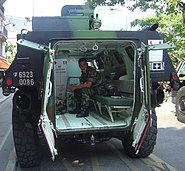 Inside view of the medical evacuation version

Detail of propeller for amphibious operation