Military Wiki
Register
Don't have an account?
Sign In
Advertisement
in: Articles incorporating text from Wikipedia, Rebellions in Asia, Kashmir conflict,
and 4 more

The United Nations has played an important role in maintaining peace and order in Jammu and Kashmir since the transfer of Power to India and independence to Pakistan in 1947. Immediately after the freedom a dispute erupted between India and the successor nation-state of Pakistan on the question of the very basis of accession of Jammu and Kashmir by the ruler. New Delhi took this matter to the United Nation and the Security Council passed resolution 39 (1948) and established the United Nations Commission for India and Pakistan (UNCIP) to investigate and mediate the issues .

Map of UN's version of the South Asia region

Map of UN's version of Pakistan

Map of UN's version of the Kashmir region 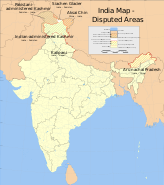 As with other disputed territories, each government issues maps depicting their claims in Kashmir as part of their territory, regardless of actual control. It is illegal in India to exclude all or part of Kashmir in a map. It is also illegal in Pakistan not to include the state of Jammu and Kashmir as disputed territory, as permitted by the U.N. Non-participants often use the Line of Control and the Line of Actual Control as the depicted boundaries, as is done in the CIA World Factbook, and the region is often marked out in hashmarks, although the Indian government strictly opposes such practices. When Microsoft released a map in Windows 95 and MapPoint 2002, a controversy was raised because it did not show all of Kashmir as part of India as per Indian claim. However, all the neutral and Pakistani companies claim to follow UN's map and over 90% of all maps containing the territory of Kashmir show it as disputed territory.[1]

Status of Jammu and Kashmir in the Republic of India

Meanwhile, elections were held in Indian administered Jammu & Kashmir, which brought up the popular Muslim leader Sheikh Abdullah, who with his party National Conference, generally supported India. The elected Constituent Assembly met for the first time in Srinagar on October 31, 1951.[3] Then The State Constituent Assembly ratified the accession of the State to the Union of India on February 6, 1954 and the President of India subsequently issued the Constitution (Application to J&K) Order under Article 370 of the Indian Constitution extending the Union Constitution to the State with some exceptions and modifications. The State’s own Constitution came into force on January 26, 1957 under which the elections to the State Legislative Assembly were held for the first time on the basis of adult franchise the same year. This Constitution further reiterated the ratification of the State’s accession to Union of India.[3] New Delhi: The Government of India states that "the external artificial boundaries of the Republic of India, especially concerning the international borders under its jurisdiction created by a foreign body are neither correct nor authenticated". It directly claims the territory.

Status of Azad Kashmir in Pakistan

However, these tidings were not recognized by Pakistan, which asks for a plebiscite to ascertain the wishes of the people. Pakistan set up,now called Azad Jammu and Kashmir in a West that it controls. The much larger region of Pakistani Kashmir in the North-West, which was a special dependent territory named Northern Areas in the erstwhile state, generally bore no mention in Pakistani laws and Constitution as being of any status, until in 1982 the Pakistani President General Zia ul Haq proclaimed that the people of the Northern Areas were Pakistanis and had nothing to do with the State of Jammu and Kashmir.[4] Islamabad: The Government of Pakistan maintains un-provisionally and unconditionally stating that the informal "Accession of Jammu and Kashmir" to Pakistan or even to the Republic of India remains to be decided by UN plebiscite and a formal referendum for a final settlement of the dispute. It accepts UN's map of the territory. The designations and the presentation of the Kashmir's regional map based on UNO practice, do not imply the expression of any opinion whatsoever on the part of the Commonwealth Secretariat or the publishers concerning the legal status of any country, territory or area, or of its authorities, or concerning the delimitation of its frontiers or boundaries. There is no intention to define the status Jammu and Kashmir, which has not yet been agreed upon by the parties. It further says that boundaries must be based on historical, geographical and not politically orientated by indirectly claiming the disputed territory.

Status of Aksai Chin in China

Beijing: The Communist government of the People's Republic of China maintains its control over what is known as the Chinese Kashmir of Ladakh plateau, it is claimed and disputed by the Republic of India; however recognized by Pakistan as part of China as per its claim, stating that the Line of Actual Control is not demarcated or boundary undefined, the frontier is yet to be finalised, between the states involved. See Sino-Pakistan Agreement

Formation of UNMOGIP and current status of operations

Resolution 47(1948) also enlarged the membership of the UNCIP and its role to observe ceasefire. India and Pakistan signed Karachi Agreement in March 1951 and established a ceasefire line to be supervised by observers. After the termination of UNCIP, the Security Council passed another resolution 91(1951) and established United Nations Military Observer Group in India and Pakistan (UNMOGIP) to observe and report violations of ceasefire.

After Indo-Pakistani War of 1971 the two countries signed the Simla Agreement in 1972 to define the Line of Control in Kashmir. India and Pakistan disagree on UNMOGIP’s mandate in Kashmir because India argued that the mandate of UNMOGIP has lapsed after Simla agreement because it was specifically established to observe ceasefire according to Karachi Agreement. However, The Secretary General of the United Nations maintained that the UNMOGIP should continue to function because no resolution has been passed to terminate it. The military authorities of Pakistan have continued to lodge complaints with UNMOGIP about ceasefire violations. The military authorities of India have lodged no complaints since January 1972 and have restricted the activities of the UN observers on the Indian side of the Line of Control.[5]