Underway replenishment (UNREP) (US Navy) or replenishment at sea (RAS) (NATO/Commonwealth) is a method of transferring fuel, munitions, and stores from one ship to another while under way.

Prior to underway replenishment, coaling stations were the only way to refuel ships far from home. This however had two disadvantages: the competition between the colonial powers for suitable sites astride the world's trade routes, and the introduction of a predictable pattern to a nation's naval operations.

Following some early development starting at about 1900 for transferring coal, the technique of underway replenishment was perfected by the United States Navy in the 1920s and 1930s, beginning with the supply ship and receiver ship coming alongside each other at full stop in good sea states,[1] but this was found impractical and methods were developed while ships were underway which were used extensively as a logistics support technique in the Pacific theatre of World War II.[2] Since it allowed extended range and striking capability to naval task forces the technique was classified so that enemy nations could not duplicate it. Presently, most underway replenishments for the United States Navy are handled by the Military Sealift Command. It is now used by most, if not all, blue-water navies.

Germany used specialized submarines (so-called milk-cows) to supply hunter U-boats in the Atlantic during World War II. However, these were relatively ponderous, required both submarines to be stationary on the surface, took a long time to transfer stores, and needed to be in radio contact with the replenished boat, all conspiring to make them rather easy targets. Due to this, those not sunk were soon retired from their supply role.

While the United States has invested a great deal of time and effort in perfecting underway replenishment procedures, these are still hazardous operations.[3]

There are several methods of performing an underway replenishment.

The alongside connected replenishment (CONREP) is a standard method of transferring liquids such as fuel and fresh water, along with ammunition and break bulk goods. The supplying ship holds a steady course and speed, generally between 12 and 16 knots. Moving at speed lessens relative motion due to wave action and allows better control of heading.[4] The receiving ship then comes alongside the supplier at a distance of approximately 30 yards. A gunline, pneumatic line thrower, or shot line is fired from the supplier, which is used to pull across a messenger line. This line is used to pull across other equipment such as a distance line, phone line, and the transfer rig lines. As the command ship of the replenishment operation, the supply ship provides all lines and equipment needed for the transfer. Additionally, all commands are directed from the supply ship.

Because of the relative position of the ships, it is possible for some ships to set up multiple transfer rigs, allowing for faster transfer or the transfer of multiple types of stores. Additionally, many replenishment ships are set up to service two receivers at one time, with one being replenished on each side.

Alongside connected replenishment is a risky operation, as two or three ships running side-by-side at speed must hold to precisely the same course and speed for a long period of time. Moreover, the hydrodynamics of two ships running close together cause a suction between them. A slight steering error on the part of one of the ships could cause a collision, or part the transfer lines and fuel hoses. At a speed of 12 knots, a 1 degree variation in heading will produce a lateral speed of around 20 feet per minute.[5] For this reason, experienced and qualified helmsmen are required during the replenishment, and the crew on the bridge must give their undivided attention to the ship's course and speed. The risk is increased when a replenishment ship is servicing two ships at once.

In case of emergency, crews practice emergency breakaway procedures, where the ships will separate in less-than-optimal situations. Although the ships will be saved from collision, it is possible to lose stores, as the ships may not be able to finish the current transfer.

Following successful completion of replenishment, many US ships engage in the custom of playing a signature tune over the replenished vessel's PA system as they break away from the supplying vessel.

The earliest type of replenishment, rarely used today, is astern fueling. In this method, the receiving ship follows directly behind the supplying ship. The fuel-supplying ship throws a marker buoy into the sea and the receiving ship takes station with it. Then the delivering ship trails a hose in the water that the fuel-receiving ship retrieves and connects to. This method is more limited, as only one transfer rig can be set up. However, it is safer, as a slight course error will not cause a collision. The first underway refueling conducted by the US Navy was the astern replenishment of the destroyer Hogan by the oiler Cuyama in 1921; further experiments with Cuyama and Kanawha led the Navy to conclude that the rate of fuel transfer was too slow to be useful. The astern method of refueling was used by The German and Japanese Navys during World War II. This method was used by the Soviet navy for many decades after the end of World War II.

A third type of underway replenishment is vertical replenishment (VERTREP). In this method, a helicopter lifts cargo from the supplying ship and lowers it to the receiving ship. The main advantage of this method is that the ships do not need to be close to each other, so there is little risk of collision; VERTREP is also used to supplement and speed stores transfer between ships conducting CONREP. However, the maximum load and transfer speeds are both limited by the capacity of the helicopter, and fuel and other liquids cannot be supplied via VERTREP.

Moving pallets into the hangar of a Nimitz-class carrier

Moving pallets into the hangar of USS Enterprise (CVN-65) 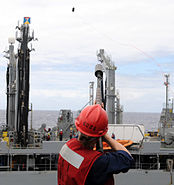 Supply and deck department Sailors transfer cargo in the hangar bay of the aircraft carrier USS George Washington (CVN-73) during a replenishment at sea.