USS Winston S. Churchill (DDG-81) is a $1 billion[1] Arleigh Burke-class guided missile destroyer of the United States Navy. She is the 31st destroyer of an originally planned 62-ship class. The Churchill is named after British Prime Minister Sir Winston Churchill. Her home port is in Naval Station Norfolk, Virginia. She is a component of Carrier Strike Group Ten.

On 29 November 1995, on a visit to the United Kingdom, President Bill Clinton announced to both Houses of Parliament that the new ship would be named after former British Prime Minister and Honorary Citizen of the United States, Sir Winston Churchill. It would make it technically the first warship of the United States Navy to be named after a non-American citizen since 1975, and the first destroyer and only the fourth American warship named after a British citizen. Other American warships named after Britons were Alfred, an armed merchantman named after King Alfred the Great; Raleigh, a continental frigate, named after Sir Walter Raleigh (though three later USS Raleighs—and two Confederate warships—would be named for the North Carolina city, which did not exist at the time) and Effingham, named after The 3rd Earl of Effingham who resigned his commission rather than fight the Americans during the American Revolutionary War. The former frigate Harold E. Holt was also named after a person from a country in the Commonwealth of Nations, the ill-fated Australian Prime Minister Harold Holt, however, this is the first ship to be named for a modern British hero, and British Prime Minister.

The contract to build Churchill was awarded to the Bath Iron Works Corporation on 6 January 1995, and the keel was laid down on 7 May 1998. Churchill was launched 17 April 1999, delivered 13 October 2000, and commissioned 10 March 2001. The launch and christening of the ship was co-sponsored by Lady Soames, the daughter of Winston Churchill, and Mrs. Janet Cohen, wife of the Secretary of Defense. Her first commanding officer was Commander (now Rear Admiral) Michael T. Franken.[2]

USS Winston S. Churchill at the Portsmouth International Festival of the Sea in 2001 as an RAF Supermarine Spitfire flies past 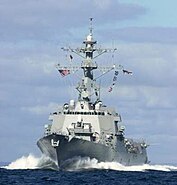 The shaft driver propeller under the port side stern

FGS Lütjens: "We Stand By You". 14 September 2001
DDG-81 Shock Trial.jpg
The Churchill undergoes shock trials off the Florida coast.

This article includes information collected from the Naval Vessel Register, which, as a U.S. government publication, is in the public domain.