View source
watch 01:36
We're Getting Mutants in the MCU - The Loop
Do you like this video?
Play Sound
For other ships of the same name, see USS Vincennes.

The USS Vincennes (CG-49) was a Ticonderoga-class Aegis guided missile cruiser in service with the United States Navy from July 1985 to June 2005. Decommissioned in 2005, Vincennes was sold for scrapping to International Shipbreaking in July 2010, and finished scrapping by the end of November 2011.

Vincennes is best known for shooting down an Iranian civilian passenger jetliner, Iran Air Flight 655, over the Persian Gulf on 3 July 1988, killing all 290 civilians on board (including 38 non-Iranians and 66 children), sparking an international incident between the Islamic Republic of Iran and the United States of America.

Vincennes was launched on 14 April 1984 and sponsored by Marilyn Quayle, wife of Indiana Senator Dan Quayle. Vincennes was named for the Battle of Vincennes during the American Revolutionary War, while the previous Vincennes heavy cruiser and Vincennes light cruiser were named for the city of Vincennes, Indiana. She was commissioned at Pascagoula 6 July 1985, Captain George N. Gee in command. The ship normally carried guided missiles, rapid-fire cannons, and two Seahawk LAMPS helicopters for anti-submarine and anti-ship warfare, personnel transfers, and other purposes.

Vincennes was the first of the Ticonderoga class cruisers to enter the Pacific Fleet. Upon commissioning in 1985, Vincennes helped test the SM-2 Block II surface-to-air missile. In May 1986, Vincennes participated in the multinational exercise RIMPAC 86, coordinating the anti-aircraft warfare efforts of two aircraft carriers and more than 40 ships from five nations. The Vincennes was deployed in August 1986 to the Western Pacific and Indian Oceans. The ship served as anti-air warfare commander with the Carl Vinson and New Jersey battle groups, operated with the Japan Maritime Self-Defense Force and the Royal Australian Navy, and steamed more than 46,000 miles (74,000 km) in waters from the Bering Sea to the Indian Ocean.[1][2]

During the Iran-Iraq War the United States took active measures in the Persian Gulf to protect shipping, mainly oil tankers, that were being threatened by both countries.

On 14 April 1988, the guided missile frigate Samuel B. Roberts hit a mine in the Persian Gulf during Operation Earnest Will. Six days later, Vincennes was re-deployed from Fleet Exercise 88-1, sent back to San Diego, California and told to prepare for a six-month deployment. The reason for the haste: Navy leaders decided that they needed an Aegis ship to protect the exit of the damaged Roberts through the Strait of Hormuz. One month later, the cruiser entered the Persian Gulf, and in early July, stood guard in the Strait as the damaged frigate was borne out on the Mighty Servant 2 heavy-lift ship. The ship made 14 Hormuz transits during its Earnest Will operations.

On 3 July 1988, Vincennes, under the command of Captain Will Rogers III, fired two radar-guided missiles and shot down an Iran Air Airbus A300 civilian airliner over Iranian airspace in the Strait of Hormuz, killing all 290 passengers and crew on board. According to Captain Rogers, they were being attacked by eight Iranian gun boats. Vincennes was defending itself from this attack when the plane was shot at with two Standard missiles. Crucially, the Vincennes misidentified the Iranian Airbus as an attacking F-14 Tomcat fighter aircraft. A radio warning had been sent to the aircraft on the international air distress frequency. CNN showed video from the area where they found plane wreckage, 25 miles away from the location that Vincennes fired the two Standard missiles. Also noted from CNNs video footage was the lack of other floating debris such as luggage, airplane seat cushions and clothing on the victims seeing that all bodies recovered were bloated and floating hours after they passed.

The Iranian government has maintained that the Vincennes knowingly shot down the civilian aircraft.[3] Iran Air flight IR655 flew every day out of Bandar Abbas—a civil as well as military airport—on a scheduled passenger flight to Dubai using established air lanes. The Italian navy and another US warship, the frigate Sides, confirmed that the plane was climbing—not diving to attack—at the time of the missile strike. The U.S. radio warnings were only broadcast on 121.5 MHz, not air traffic control frequencies and mistakenly identified the altitude and position of the plane, so the Airbus crew, if they were monitoring "guard," could have misinterpreted the warnings as referring to another aircraft. Captain David Carlson of the Sides later said that the destruction of the airliner "marked the horrifying climax to Rogers' aggressiveness".[4]

In February 1990, Vincennes was deployed on a third six-month tour of the western Pacific and Indian oceans, with SH-60 helicopters from HSL-45 Detachment 13. The ship coordinated all battle group air events and served as the command-and-control flagship during Harpoon-Ex-90. In July 1990, Vincennes returned home after steaming nearly 100,000 miles (160,000 km).[1][2]

In August 1991, Vincennes departed for a fourth western Pacific deployment. Steaming with Independence, Vincennes performed duties as the anti-air warfare commander for Battle Group Delta until detaching to participate as the United States representative in MERCUBEX 91, a joint United States and Republic of Singapore Navy exercise. Over the next three months, Vincennes participated in the bilateral exercise Valiant Blitz with the South Korean Navy, the bilateral exercise Annualex 03G with the Japanese Maritime Self Defense Force, and ASWEX 92-1K with the South Korean Navy before reaching Hong Kong to act as the U.S. representative for the Navy Days ceremonies. Vincennes returned from deployment on 21 December 1991.

In June 1994, Vincennes departed on a fifth western Pacific deployment with the Kitty Hawk Battle Group. Vincennes performed duties as anti-air warfare commander for the battle group. During deployment, Vincennes conducted an anti-submarine exercise, PASSEX 94-2, with the Japan Maritime Self-Defense Force, the bilateral exercise MERCUB 94-2, a joint U.S. and Singaporean Navy exercise of the Malaysian peninsula, the bilateral exercise Keen Edge, with the Japan Maritime Self-Defense Force, and Tandem Thrust, a larger-scale joint exercise which Vincennes participated as the area air defense coordinator for the entire joint operating area. Vincennes returned from this deployment on 22 December 1994.

Vincennes also took part in the U.S. Seventh Fleet's Fleet Battle Experiment Delta (FBE-D) from 24 October 1998, to 2 November 1998, in conjunction with the exercise, Foal Eagle, a regularly scheduled exercise that simulates the military defense of South Korea. Sponsored by the Navy Warfare Development Command, FBE-D was the fourth in a series of experiments that tested new combat systems and procedures at sea.

On 12 August 2000, Vincennes completed Sharem 134, a bilateral exercise with several Japanese ships and other U.S. participants. The exercise included a week of undersea warfare training and data collection in the South China Sea. The ship tested its submarine detection, sonar range testing, and sonobuoy employment and developed new submarine prosecution procedures. The final Sharem events included a "freeplay", which allowed the cruiser to detect and prosecute other submarines, combining many of the tactics and systems tested during Sharem.

On 23 March 2001, Vincennes, as part of the Kitty Hawk Battle Group, cruised into Changi Naval Base, the first time a U.S. carrier had moored pierside in Singapore. Vincennes took part in a 23 August 2001 to 27 August 2001, military training exercise called Multi-Sail, which was designed to provide U.S. and Japanese forces interoperability training in multiple warfare areas.

Vincennes departed from Yokosuka on 17 September 2001, to conduct operations in support of Operation Enduring Freedom. The ship returned on 18 December 2001 after more than three months at sea.

In March 2003 Vincennes was assigned to Destroyer Squadron 15.[5]

Vincennes was decommissioned on 29 June 2005 at San Diego, California and was stricken later that day. She was mothballed at the Naval Inactive Ship Maintenance Facility in Naval Base Kitsap, in Bremerton, Washington. In 2008, Vincennes was slated for scrapping within the next five years along with her sister ships Thomas S. Gates and Yorktown. 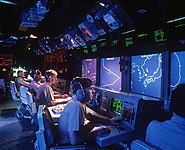 The Combat Information Center on board the USS Vincennes (CG-49), in January 1988.

The USS Vincennes pulls into port at Pearl Harbor, Hawaii, on 15 April 2005. The USS Missouri (BB-63) is visible in the background.

Captain Will C. Rogers III, the then-commanding officer of the USS Vincennes (CG-49), speaks during the welcome home ceremony held for the crew at San Diego, California, on 24 October 1988. The ship returned from a six-month deployment to the Western Pacific, Indian Ocean and the Persian Gulf.

Captain Will C. Rogers III, the then-commanding officer of the USS Vincennes (CG-49), speaks during the welcome home ceremony held for the crew at San Diego, California, on 24 October 1988. The ship returned from a six-month deployment to the Western Pacific, Indian Ocean and the Persian Gulf.