View source
watch 01:25
Jurassic World: Dominion Dominates Fandom Wikis - The Loop
Do you like this video?
Play Sound
For other ships of the same name, see USS Triton. 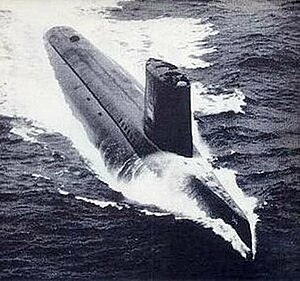 You know, I think the Triton kind of, I think was a spur for that routine as I think back. Because I then imagined what a trip like that would have been like with a totally incompetent commander, and the cruise of the USS Codfish was the final result.[11]

Captain Beach reportedly played "The Cruise of the U.S.S. Codfish" over the ship's public address system during Triton's first overseas deployment in the Fall of 1960.[12] Antigua-Barbuda issued a commemorative stamp of Triton's 1960 submerged circumnavigation.[13] Also, Triton was the name of one of the submersibles featured in the Submarine Voyage attraction at Disneyland which operated from 1959 to 1998.[14]

The 50th anniversary of Operation Sandblast and Triton's submerged circumnavigation of the world was celebrated on 10 April 2010, during the 2010 Submarine Birthday Ball held at the Foxwoods Resort Casino in Mashantuket, Connecticut, with Master Chief Petty Officer of the Navy (MCPON) Rick D. West delivering opening remarks (pictured) to the 2,200 attendees.[15][16][17][18] The U.S. Navy Submarine Force Library and Museum sponsored additional events and activities, entitled "9,000 Leagues Under the Sea," between 10–12 April and 14–18 April 2010.[19][20][21]

Also, on 9 April 2010, retired Admiral Henry G. Chiles, Jr., who served in Triton from 1963–1966, was the keynote speaker at the graduation class of the Basic Enlisted Submarine School at the New London Naval Submarine Base in Groton, Connecticut. The graduation class was named in honor of Triton, and each graduate received a certificate of course completion and a commemorative coin celebrating the 50th anniversary of Triton's submerged circumnavigation.[16] The Dolphin Scholarship Foundation used the 50th anniversary of Operation Sandblast to promote its Race Around the World fund-raising program to support its Dolphin Scholarship program.[22][23] Finally, former members of Triton's crew received commemorative souvenirs of the ship's pressure hull at their 2010 re-union.[24]

For the 50th anniversary of Operation Sandblast (see below), writer-historian Carl LaVO wrote "Incredible Voyage" for the June 2010 edition of Naval History magazine, and John Beach wrote "The First Submerged Circumnavigation" for the April 1960 issue of The Submarine Review, the official magazine of the Naval Submarine League.[25][26] Mr. Beach is the nephew of Captain Edward L. Beach, the commanding officer of the USS Triton during Operation Sandblast.[27] Finally, the Naval Institute Press published Beneath the Waves by Dr. Edward F. Finch, a 2010 biography of the late Captain Beach, which includes extensive coverage of Operation Sandblast.[28]

The legacy of Operation Sandblast on its 50th anniversary was summarized by retired Captain James C. Hay who had served on Triton during its historic submerged around-the-world voyage. On the editorial page of the April 1960 issue of The Submarine Review, the official magazine of the Naval Submarine League, Captain Hay noted:

It is truly a cruise which tested the crew's mettle and proved the skipper's tenacity. More than that, however, it again proved to all who cared to listen that the US Navy could go anywhere, at anytime, and do what ever was required. It's a good sea story about doing what had to be done. On the fiftieth anniversary of the First Submerged Circumnavigation it's a good thing to do to re-read about one of the forerunners of all we're done since.[29]