View source
For other ships of the same name, see USS Samuel B. Roberts.

USS Samuel B. Roberts (FFG-58) is one of the final ships in the United States Navy's Oliver Hazard Perry class of guided missile frigates (FFG). The ship was severely damaged by an Iranian mine in 1988, leading U.S. forces to respond with Operation Praying Mantis.

The frigate was named for Samuel B. Roberts, a Navy coxswain who was killed while evacuating the U.S. Marines during the battle of Guadalcanal in 1942. Roberts was posthumously awarded the Navy Cross.

FFG-58, the third U.S. ship to bear the coxswain's name, was launched in December 1984 by Bath Iron Works (BIW) and sponsored by the wife of Jack Yusen, a sailor who served in World War II and in the battle of Leyte Gulf on the former USS Samuel B. Roberts. Put in commission in April 1986 under the command of Commander Paul X. Rinn, the ship garnered numerous awards and commendations even before its first deployment.

1988 deployment and mine strike

The frigate deployed from its home port in Newport, Rhode Island in January 1988, heading for the Persian Gulf to participate in Operation Earnest Will, the escort of reflagged Kuwaiti tankers during the Iran–Iraq War. The Roberts had arrived in the Persian Gulf and was heading for a refueling rendezvous on 14 April when the ship struck an M-08 naval mine in the central Persian Gulf, an area it had safely transited a few days previously. The mine blew a 15-foot (5 m) hole in the hull, flooded the engine room, and knocked the two gas turbines from their mounts. The blast also broke the keel of the ship; such structural damage is almost always fatal to most vessels. The crew fought fire and flooding for five hours and saved the ship. Among other steps, sailors cinched cables on the cracked superstructure in an effort to stabilize it.[1] She used her auxiliary thrusters to get out of the mine field at 5kts. She never lost combat capability with her radars and Mk13 missile launcher. Ten sailors were medevaced for injuries sustained in the blast, six returned to the Roberts in a day or so. Four burn victims were sent for treatment to a military hospital in Germany, and eventually to medical facilities in the United States.[2]

When U.S. divers recovered several unexploded mines, they found that their serial numbers matched the sequence on mines seized the previous September aboard an Iranian mine-layer named Iran Ajr. Four days later, U.S. forces retaliated against Iran in Operation Praying Mantis, a one-day campaign that was the largest American surface engagement since World War II.[3] U.S. ships, aircraft, and troops destroyed two Iranian oil platforms used to control Iranian naval forces in the Persian Gulf, sank one Iranian frigate, damaged another, and sent at least three armed, high-speed boats to the bottom. The U.S. lost one Marine helicopter and its crew of two airmen in what appeared to be a night maneuver accident rather than a result of hostile operations.

On 27 June 1988, Roberts was loaded onto the Mighty Servant 2, a semi-submersible heavy lift ship owned by Dutch shipping firm Wijsmuller Transport and carried back to Newport for $1.3 million.[4] The frigate arrived at BIW's Portland, Maine, yard on 6 October 1988 for repairs. The repair job was unique: the entire engine room was cut out of the hull, and a 315-ton replacement module was jacked up and welded into place.[5] She undocked 1 April 1989 for sea trials.

The repairs were completed three weeks ahead of schedule at a cost of $89.5 million, $3.5 million less than expected.[1] By comparison, USS Princeton, which was damaged by a moored mine during the 1991 Gulf War, was repaired for $24 million;[6] however, the cruiser was not directly struck by the mine and its displacement is nearly twice that of Roberts. The mine that nearly sank Roberts had an estimated cost of $1,500.[6]

After 13 months of repairs, Roberts was returned to service in a 16 October 1989 ceremony.

Roberts made her second deployment in 1990 for Operation Desert Storm and Operation Desert Shield. The frigate operated as part of the Red Sea Maritime Interception Force, an international force of ships that enforced U.N. sanctions against Iraq. The frigate's sailors boarded more than 100 merchant ships in efforts to prevent cargo shipments to or from Iraq.[7] On 28 March 1991, she returned to Newport.

On 30 August 1991, Joseph A. Sestak took command of Roberts, which was named the Atlantic Fleet's best surface combatant in the 1993 Battenberg Cup competition.

"Sammy B", as the ship is sometimes called, is homeported in Mayport, Florida. 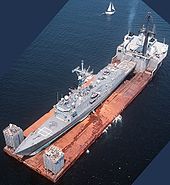 Roberts in a dry dock in Dubai, UAE for temporary repairs.