View source
watch 01:36
We're Getting Mutants in the MCU - The Loop
Do you like this video?
Play Sound
For other ships of the same name, see USS Mississippi.

USS Mississippi (CGN-40), a Virginia class, nuclear fuel powered, U.S. Navy guided-missile cruiser, was the fourth ship of the United States Navy named in honor of the 20th state admitted to the Union. Her keel was laid down by the Newport News Shipbuilding and Drydock Company at Newport News, Virginia, on 22 February 1975. She was launched on 31 July 1976. The ship was commissioned on 5 August 1978 by president Jimmy Carter, then serving as the 39th President of the United States. Early deployment included escorting the carrier USS Nimitz (CVN-68). She also was deployed in 1989 as a response to the capture and subsequent murder of U.S. Marine Corps Colonel William R. Higgins by terrorists. 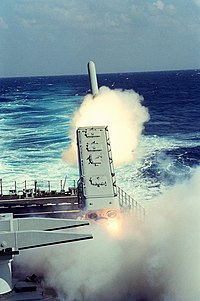 A BGM-109 Tomahawk Land-Attack Missile (TLAM) is launched toward a target in Iraq from the port side Mark 143 Armored Box Launcher (ABL) on the stern of the nuclear-powered guided missile cruiser USS Mississippi (CGN-40) during Operation Desert Storm. 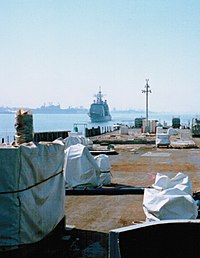 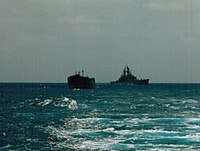 Under tow behind USNS Mohawk

The USS Mississippi (CGN-40) was decommissioned and stricken from the Naval Vessel Register on 28 July 1997. The ship was prepared and then towed from Norfolk, VA to Bremerton, WA via the Panama Canal from March 1998 to May 1998. The MSC fleet tug USNS Mohawk began the tow until Mississippi was moored at Rodman Naval Station, Panama. The Pacific tow was completed by the USNS Navajo.