Military Wiki
Register
Don't have an account?
Sign In
Advertisement
in: Pages with incorrect use of RailGauge template, Articles incorporating text from Wikipedia, USATC S100,
and 13 more

Wartime development and use

The S100 is a side tank design by Col. Howard G. Hill. In 1942, the USATC ordered 382 S100s from Davenport Locomotive Works of Iowa, H. K. Porter, Inc, of Pittsburgh and Vulcan Iron Works of Wilkes-Barre. They were shipped to Great Britain in 1943 where they were stored until 1944. After D-Day, they were shipped to Continental Europe.

Use after the Second World War

The Oranje-Nassau Mijnen, a coal mining company in The Netherlands acquired two S100's (USATC 4389 and 1948)and numbered them ON-26 (Davenport 2533) and ON-27 (Davenport 2513) respectively. The ON-26 survived the scrapyard and was sold to the museum railway Stoomtrein Goes-Borsele.[1]

The Southern Railway (GB) bought 15 S100's (14 for operational use and one for spare parts) and designated them USA Class. Other S100's entered British industrial use with the National Coal Board, Longmoor Military Railway, Austin Motor Company and others.

China acquired about 20 S100's, designating them class XK2. In 1946, Egyptian State Railways bought eight and numbered them 1151–1158.[2] The UK War Department loaned six to Palestine Railways. In 1946 PR bought two of these, both of which subsequently entered the stock of Israel Railways in 1948.[3]

Several European railways produced designs based on the S100. JŽ added to their Class 62 by ordering several similar examples from Đuro Đaković (factory) of Slavonski Brod, Croatia. These differed in minor details, principally the use of plate frames instead of bar frames, resulting in a higher boiler pitch. This gives the steam pipes a shoulder instead of being straight, and requires smaller domes with a flatter top to fit JŽ's loading gauge.

Poland built several TKh Ferrum locomotives. These have a similar outline but include various differences such as the use of 2 domes instead of 3, driving onto the second axle instead of the third, a different cab, etc.

The British Great Western Railway (GWR) had used many S100s in South Wales during the Second World War. The GWR 1500 Class was partially inspired by the S100 in its use of outside cylinders and short wheelbase.

A small number of former JŽ 62's remain in commercial service, more than 65 years after they were built. At least two work as switchers (shunters) at the ArcelorMittal steel plant in Zenica, Bosnia-Hercegovina.[7]

More than 100 S100s survive: either preserved, stored or derelict. Most are in Europe or North America but there are also two in China and one in Egypt. Project 62 has an online database of them.[8] 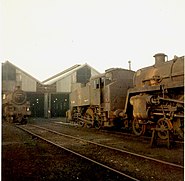