The U.S. military issues instructor badges to specially training military personnel who are charged with teaching military recruits the skills they need to perform as members of the U.S. Armed Forces. With the exception of the U.S. Army and U.S. Coast Guard, these badges are considered temporary military decorations and must be surrendered upon completion of one's duty as a military instructor. Because of this, the U.S. Air Force, U.S. Navy, and U.S. Marine Corps award Drill Instructor Ribbons as a permanent decoration to recognize service members who have qualified and performed as military instructors.[1][2][3]

The Drill Sergeant Identification Badge is a military badge of the United States Army which was first issued on January 15, 1958. It is also nicknamed the "pumpkin" patch due to its appearance when worn in the non-subdued pin-on version and in the color sew-on version worn before insignia was subdued in the 1950s and 1960s. The badge is presented to any NCO who has completed the Drill Sergeant Course at any U.S. Army Drill Sergeant School, and has been assigned as a drill sergeant at a U.S. Army training command.[4][5][6]

The drill sergeant identification badge is worn by all qualified drill sergeants. Each element of the badge has a specific meaning. It consists of 13 stars representing the original colonies. The torch, burning brightly, in the center symbolizes liberty. The snake is derived from the original ”Don’t Tread On Me” serpent on the Gadsden flag, a symbol of American independence during the 18th century. Together with the torch and breastplate, it indicated readiness to defend. The breastplate is a symbol of strength. The green background is a vestment worn under the breastplate. It's called a Jupon, which represents the new Army. The snake grasps, with his tail and teeth, a scroll inscribed “This We’ll Defend,” the motto of the United States Army. The inscription summarizes the meaning of all the symbols on the badge, depicting the determination, devotion, and constant readiness of the American soldier.[4][5][6] 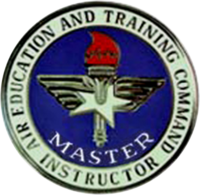 The Air Education and Training Instructor Badge may be awarded as a temporary decoration to any Air Force service member who has completed a course of instruction as a Drill Instructor or Education Trainer. The badge is then presented upon the service member’s assignment to an Air Force Training Command, such as basic training or Officer Training School. The badge is also occasionally granted to non-commissioned officers attached to Air Force ROTC units who serve as Cadet Drill Instructors.[7][8]

Instructors who have completed the requirements for their applicable master instructor program may be awarded the Air Education and Training Master Instructor Badge. Physically, the only difference between these two badges is the incorporation of the word "MASTER" arched in silver below the torch within the blue field of the badge's shield.[8] 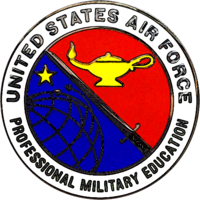 The Air Force also has an Air Force Junior Reserve Officers' Training Corps (AFJROTC) Instructor Badge, which is similar in design to the Air Force Commander's Insignia, that is worn by Air Force personnel assigned to AFJROTC units as instructors.[7][10]

These badges served/serves as a duty identifier. Personnel who are no longer assigned to a wing or organization directly involved in training or education development discontinue wearing these badges.[7][8]

The Recruit Division Commander Badge is designed with a gold rope bordering the badge with a black band inside the gold rope which is embossed in gold lettering with the words "Division Commander". The center contains an eagle design, similar to the Bureau of Naval Personnel Seal, on a white background encircled by gold link. The Gold Wreath Award version has a gold wreath that replaces the gold rope which has a white scroll at the top of the wreath with the word "Excellence" embossed in gold. Inside the gold wreath is the same Division Commander Badge described above.[11]

The Division Commander badge is considered a temporary badge that must be surrendered upon completion of an instructor's training assignment.[11]

The Company Commander Insignia is a permanent decoration and may be worn for the remainder of the Coast Guardsman's military carrier.[12]