Military Wiki
Register
Don't have an account?
Sign In
Advertisement
in: All articles with broken citations, Pages with broken file links, Articles containing potentially dated statements from 2014,
and 3 more

USAES defines its mission as:

Generate the military engineer capabilities the Army needs: training and certifying Soldiers with the right knowledge, skills, and critical thinking; growing and educating professional leaders; organizing and equipping units; establishing a doctrinal framework for employing capabilities; and remaining an adaptive institution in order to provide Commanders with the freedom of action they need to successfully execute Unified Land Operations.[2]

As with the United States Army Corps of Engineers, the Engineer School traces its roots to the American Revolution. General Headquarters Orders, Valley Forge, dated 9 June 1778 read 3 Captains and 9 Lieutenants are wanted to officer the Company of Sappers. As the Corps will be a SCHOOL OF ENGINEERING, it opens a prospect to such gentlemen as enter it... Shortly after the publishing of the order, the "school" moved to the river fortifications at West Point. With the end of the war and the mustering out of the Army, the school closed. However, the Regiment of Artillerists and Engineers was constituted a military school and was reopened at the same location in 1794. For four years it constituted a school of application for new engineers and artillerymen. Closing in 1798, due to a fire which destroyed many facilities, the engineers were without a school for three years.

In 1801, the War Department revived the school, and Major Jonathan Williams became its superintendent. Less than a year later, Congress authorized the Corps of Engineers and constituted it at West Point as a military academy. For the next 64 years, the Military Academy was under the supervision of the Corps. Although the curriculum was heavily laced with engineering subjects, the Academy commissioned officers into all branches of the service. Following the American Civil War (1861-1865), supervision of the Academy passed to the War Department.

When the Engineer Battalion took station at Willets Point in 1866, Engineer leaders saw the opportunity to develop a school oriented exclusively to engineers. From 1868 to 1885, an informal School of Application existed. Part of this effort involved the creation of the Essayons Club. This was an informal group which met during the winter months and presented professional engineer papers. In 1885, the School of Application received formal recognition by the War Department. In 1890, the name was changed to United States Engineer School.

After 68 years, in 1988, the home of the Engineer School was moved to Fort Leonard Wood, Missouri "due to a shortage of land for training at Fort Belvoir" [3] The move also allowed engineer training of officers, warrant officers and enlisted to be conducted in the same location.[4]

The distinctive insignia for the U.S. Army Engineer School was approved by the War Department on June 27, 1929. It had been used on diplomas and stationery since 1924. Scarlet and white are the colors of the Engineers. Scarlet represents the shared heritage with the Artillery. From 1794 to 1802, the Engineers were part of the Corps of Artillerists and Engineers. White is the traditional color of the Infantry. Its use on the shield reflects the Engineers’ secondary mission of fighting as infantry. Above the shield is the “Lamp of Knowledge”. The lamps represents the Engineer Schools mission to train and educate.

Under the shield is the motto of the Engineers-Essayons. It is a French term which means “Let us strive”, “Let us try”. The use of this term reflects the contributions of French Engineers to the Nation’s struggle for independence and the influence of the French Engineers on the early development of the Corps.

The castle symbolizes the classical role of Engineers as those who build fortifications and those who breach their walls. The castle has been used by the Corps since 1840, when it was adopted as a device on the uniform of the Cadets of the United States Military Academy. 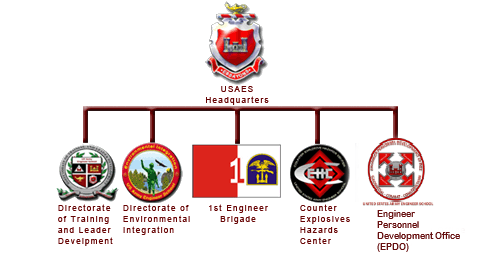