The Type 056 corvette (NATO codename: Jiangdao) is a new Chinese light warship that entered service with the People's Liberation Army Navy in 2012 as a replacement for the Type 037 series of patrol vessels. It has been described as a stealth missile corvette which is also armed with a 76mm main gun.

Following the designing and building of the Pattani class corvette for the Royal Thai Navy in the mid-2000s, speculation of a domestic variant of the design was rife. The speculations were confirmed in November 2010 during a visit by Maj. Gen. Wang Junli, Deputy commander of the Hong Kong Garrison and the Hong Kong University's Vice-Chancellor Tsui Lap-chee[1] when a model of the Type 056 was presented. The first ship was launched in May 2012.[2][3]


Though the Type 056 appears in the 21st century, the design concept can be referred to as early as the 1980s, when the PLAN were considering developing a larger patrol ship to replace the Type 037 to improve the living conditions on the ship, which was firstly called by Type 038. However, this concept was not realized until the appearance of Type 056 in 2012 due to the shortage of funds.[4][5]

The Type 056 has a stealthy hull design with sloped surface and a reduced superstructure clutter. There is a helipad at the stern for a light helicopter but has no organic helicopter support facilities.

Type 056 is the first Chinese warship with modular design, which makes it cover the roles from OPV to multi-role frigate. The PLAN used versions may include patrol type, ASW type, ASuW type, AAW type and commander type; while the export versions can be quite differently fitted according to consumer's requirement.For the moment, at least 3 variants of Type 056 for export exist with the same design of hull but varying bridge designs and armament layouts.

At least two versions of OPV that are blood relations with the Type 056 have been sold to other countries. One is the Royal Thai Navy's Pattani class OPV, the other is an enlarged version with full-load displacement of 1800 tonnes. Two OPVs based on the Pattani class have been ordered by the Nigerian Navy. Their factory designation is P18N.[12]

Two corvette versions have been sold to the Bangladesh Navy. A multi-role frigate version of the Type 056 with integrated mast and VLS also appeared at LIMA 2013. 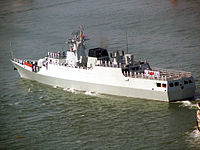