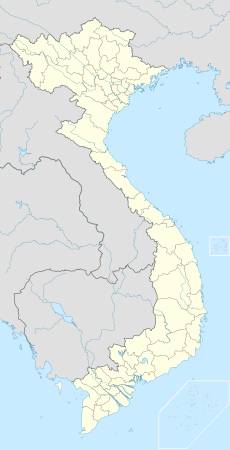 Tuy Hoa Air Base is a former air force base in Vietnam, being closed in 1970. It was built by the United States between 1965–1966 and was used by the United States Air Force during the Vietnam War in the II Corps Tactical Zone of South Vietnam. It was seized by the Vietnam People's Army in April 1975 and was abandoned for several decades. Today, the site has been redeveloped as Dong Tac Airport.

Plans for a United States Air Force Base at Tuy Hoa were developed in 1965 after the 1964 Gulf of Tonkin Resolution and the decision to deploy large numbers of United States forces to South Vietnam. The base was one of several air bases in the former South Vietnam built by United States Air Force RED HORSE civil engineering squadrons in 1966. An advance construction party of the 820th Civil Engineering Squadron (Heavy repair) arrived in June. Within six months, with the completion of interim airfield facilities, the base was in operation. This unit completed nearly 50 percent of all construction completed at Tuy Hoa, including: 170 aircraft protective revetments, 120,000 square feet (11,000 m2) of wooden buildings, and 175,000 square yards of AM-2 matting. In addition, the 820th CES operated a rock crusher 9.5 miles from the base and hauled aggregate through enemy-held territory to the base.

Tuy Hoa was originally envisioned as a Strategic Air Command B-52 base. However, security concerns of basing SAC's bombers directly in South Vietnam resulted in the assignment of B-52s to U-Tapao Air Base in neighboring Thailand. Tuy Hoa was given a tactical air support mission instead.

With construction completed, the Tactical Air Command 31st Tactical Fighter Wing was reassigned from Homestead AFB, Florida to Tuy Hoa Air Base effective 16 December 1966. The base was under the jurisdiction of Seventh Air Force, Pacific Air Forces. The APO for Tuy Hoa Air Base was APO San Francisco 96316 In South Vietnam the 31st TFW commanded five F-100 Super Sabre fighter squadrons and was the most important F-100 wing in South Vietnam. The first squadron of F-100s (the 308th) actually touched down on 15 November 1966, forty-five days ahead of schedule. Within a month, it was joined by two others (the 306th and 309th); and on 6 December the 31st Tactical Fighter Wing became combat ready at Tuy Hoa.

Assigned operational squadrons of the 31st TFW were:

In June 1967, federalized Air National Guard squadrons were deployed from the United States to supplement the 31st TFW. These were:

In turn, when the National Guard units returned to the United States after their one-year active duty was ended, F-100 squadrons from the 37th TFW at Phu Cat Air Base, which was converting to F-4Ds were deployed as replacement units. These were:

From Tuy Hoa, the wing conducted combat operations, 16 December 1966-September 1970. It controlled interdiction strikes, conducted visual and photo reconnaissance, rescue combat air patrols, and suppressed enemy antiaircraft artillery. The wing also conducted air operations against enemy forces during the Tet Offensive and the Siege of Khe Sanh from February–April 1968. It flew close air support missions during the extraction of friendly troops from Kham Duc on 12 May 1968.

The wing gained forward air control mission in May 1968 as well as continued other combat operations. The Misty "Fast FACs" of Project Commando Saber transferred from Phu Cat AB on 1 May 1969. The use of airborne forward air controllers (FACs) to direct and correct the efforts of tactical aircraft close air support aircraft had proved invaluable in Vietnam, although their piston-engine 0-2 Skymasters were slow and vulnerable, The obvious solution was to put a FAC in the back seat of two-seat F-100F aircraft, and in 1967 the Commando Saber program was instituted to do just that.

Pilots were temporarily detached from their parent units for four-month tours, flying reconnaissance, FAC, and search-and-rescue missions over Laos and North Vietnam using the call sign Misty. The aircraft were crewed by a pair of volunteer pilots, both of whom had to have logged at least 25 combat sorties and 1,000 flying hours before joining the program. The back-seater carried a comprehensive set of detailed maps, a handheld 35-mm 'strike camera' (actually an SLR with a telephoto lens) and handled communications with the fighter-bombers. The pilot found the targets and marked them, using the Misty F-100F's armament of two seven-shot white phosphorus rockets. The Misty FAC F-100Fs also flew reconnaissance and ResCAP missions, acting as on-scene controllers and co-ordinators during combat SAR missions. Missions often involved inflight refueling and could last up to six hours, with four inflight refueling contacts.

Misty pilots were an elite group, their number including two future USAF Chiefs of Staff (Ronald Fogleman) and (Merrill McPeak) and the round-the-world record breaker, Dick Rutan. 70 of the 157 Commando Saber pilots flew part or all of their tour at Tuy Hoa. The mission was hazardous and many aircraft were hit by ground fire as they orbited the target area at low level. Seven Misty FAC pilots were killed in action and four more became POWs.

SVNAF Use of Tuy Hoa Air Base

After the American withdrawal, Tuy Hoa was used for flyable storage of South Vietnamese Air Force propeller-driven aircraft (A-1, T-28) and helicopters. After the 1973 Paris Peace Accords, United States Congressional cuts in military aid to South Vietnam forced the SVNAF to abandon use of the base with no permanent personnel or active aircraft assigned. By 1975, the base showed lack of signs of maintenance and being abandoned, with little or no activities taking place on the facility.

Capture Of Tuy Hoa Air Base

In early 1975 North Vietnam realized the time was right to achieve its goal of re-uniting Vietnam under communist rule, launched a series of small ground attacks to test U.S. reaction.

On 8 January the North Vietnamese Politburo ordered a major People's Army of Vietnam (PAVN) offensive to "liberate" South Vietnam by NVA cross-border invasion. By 14 March, attacks by North Vietnamese forces led South Vietnamese President Nguyễn Văn Thiệu to abandon the Central Highlands region and two northern provinces of South Vietnam and ordered a general withdrawal of ARVN forces from those areas. Instead of an orderly withdrawal, it turned into a general retreat, with masses of military and civilians fleeing, clogging roads and creating chaos.

On 1 April, South Vietnamese forces abandoned the area around Tuy Hoa Air Base and withdrew south.

A small terminal building has been erected where the former USAF base operations existed. The former base has been largely torn down, the streets now deteriorating as they criss-cross though brushy, abandoned areas. A few buildings from the former air base remain and are used for civil purposes. The most significant remnants of the Vietnam War years are the concrete aircraft shelters, which have been abandoned since 1975. their reinforced concrete still standing and not being easy to tear down. The former USAF control tower and large fire department building with garages for the large fire engines on the flightline remains standing, their current use is undetermined. One of the two jet runways is now abandoned and deteriorated, and the large parking ramp remains largely unused except for a small section by the civil air terminal. The former large aircraft hangars and supply warehouses are long gone, their concrete floors exposed to the elements for over 30 years.