The Tupolev Tu-95 (Russian: Туполев Ту–95; NATO reporting name: Bear) is a large, four-engine turboprop-powered strategic bomber and missile platform. First flown in 1952, the Tu-95 entered service with the Soviet Union in 1956 and is expected to serve the Russian Air Force until at least 2040.[1] A naval development of the bomber is designated Tu-142.

The aircraft has four Kuznetsov NK-12 engines, developed by the Kuznetsov Design Bureau with participation of Ferdinand Brandner and other captured German engineers, each driving contra-rotating propellers. An airliner variant, the Tu-114, holds the record as the world's fastest propeller-driven aircraft. Some experimental aircraft were designed for theoretically higher speeds, but none attained or registered them. It also remains the only turboprop-powered strategic bomber in operational use. Its distinctively swept-back wings are at 35°, a very sharp angle by the standards of propeller-driven aircraft, and justified by its operating speeds and altitudes. Its blades, which rotate faster than the speed of sound, according to one media source, make it arguably the noisiest military aircraft on earth,[2] with only the experimental 1950s era Republic XF-84H "Thunderscreech" turboprop powered American fighter design as a likely rival.[citation needed] It was reportedly so loud that the underwater hydrophones of submerged submarines and SOSUS could detect it.[citation needed]

The design bureau led by Andrei Tupolev designed the Soviet Union's first intercontinental bomber, the 1949 Tu-85, a scaled up version of the Tu-4, a Boeing B-29 Superfortress copy.[3] The Tu-4 was deemed to be inadequate against the new generation of American all-weather interceptors.[citation needed]

A new requirement was issued to both Tupolev and Myasishchev design bureaus in 1950: the proposed bomber had to have an un-refueled range of 8000 km (4,970 mi) — far enough to threaten key targets in the United States. Other goals included the ability to carry an 11,000 kg (11 ton) load over the target.[citation needed]

The big problem for Tupolev was the engine choice: the Tu-4 showed that piston engines were not powerful enough to fulfill that role, while the fuel-hungry AM-3 jet engines of the proposed T-4 intercontinental jet bomber did not provide adequate range.[4] Turboprops offered more power than piston engines and better range than jets, with a top speed in between.

Tupolev's proposal was selected and Tu-95 development was officially approved by the government on 11 July 1951. It featured four Kuznetsov[5] coupled turboprops fitted with eight-bladed contra-rotating propellers, producing a nominal 8,948 kW (12,000 eshp) power rating. Unlike the advanced engine design, the fuselage was conventional: a mid-wing cantilever monoplane with 35 degrees of sweep, an angle which ensured the main wing spar passed through the fuselage in front of the bomb bay. Retractable tricycle landing gear was fitted, with all three gear strut units retracting rearwards, with the main gear units retracting rearwards into extensions of the inner engine nacelles.[citation needed]

The Tu-95/I, with 2TV-2F engines, first flew 11 November 1952 with test pilot Alexey Perelet at the controls.[6] After six months of test flights this aircraft suffered a propeller gearbox failure and crashed, killing Perelet. The second aircraft, Tu-95/II featured four of the 12,000 ehp Kuznetsov NK-12 turboprops which proved more reliable than the coupled 2TV-2F. After a successful flight testing phase, series production of the Tu-95 started in January 1956.[5]

Like its American counterpart, the Boeing B-52 Stratofortress, the Tu-95 has continued to operate in the Russian Air Force while several subsequent iterations of bomber design have come and gone. Part of the reason for this longevity was its suitability, like the B-52, for modification to different missions. Whereas the Tu-95 was originally intended to drop free-falling nuclear weapons, it was subsequently modified to perform a wide range of roles, such as the deployment of cruise missiles, maritime patrol (Tu-142), and even civilian airliner (Tu-114). An AWACS platform (Tu-126) was developed from the Tu-114. An icon of the Cold War, the Tu-95 has served not only as a weapons platform but as a symbol of Soviet and later Russian national prestige.

Designed as a stopgap in case the Tu-114A was not finished on time, two Tu-95 bombers were fitted with passenger compartments. Both aircraft had the same layout: a three-seat VIP section with office space, and the rest of the 70 m³ cabin configured as a normal airliner. Both aircraft were eventually used as crew ferries by the various Tu-95 squadrons.[citation needed] One of these machines is preserved at Ulyanovsk Central Airport.

The Tu-95RT variant in particular was a veritable icon of the Cold War as it performed a vital maritime surveillance and targeting mission for other aircraft, surface ships and submarines. It was identifiable by a large bulge under the fuselage, which housed a radar antenna that was used to search for and target surface ships.[citation needed]

The Tu-95 carried and dropped the AN602 Tsar Bomba, the largest and most powerful nuclear weapon ever detonated (deliberately de-rated from 100 to 50 megatons), in 1961.[8]

In 1992, newly independent Kazakhstan began returning the Tu-95 aircraft of the 79th Heavy Bomber Aviation Division at Dolon air base to the Russian Federation.[9] The bombers joined those already at the Far Eastern Ukrainka air base.[10]

Russian Tu-95s reportedly took part in a naval exercise off the coasts of France and Spain in January 2008, alongside Tu-22M3 Backfire strategic bombers and airborne early-warning aircraft.[20]

During the Russian Stability 2008 military exercise in October 2008, Tu-95MS aircraft fired live air-launched cruise missiles for the first time since 1984. The long range of the Raduga Kh-55 cruise missile means Tu-95MS Bears can once again serve as a strategic weapons system.[21]

On 8 July 2011, two Russian Tu-95 turboprop bombers flew an 11-hour flight over the northeast Pacific Ocean and the Sea of Japan. Japan sent two fighter pairs of F-15 and F-2 aircraft to intercept and escort the Russian bombers over portions of the flight. On 8 September 2011, two Russian Tu-95 bombers flew near Japanese airspace, and Japan Air Self Defense Force fighters were sent to intercept them.[22]

During 2012, according to U.S. military sources, two different incidents took place involving Russian Tu-95 Bear-H bombers flying near United States airspace. The first occurred in mid-June during Russian military exercises near Alaska, prompting NORAD to send U.S. F-15s and Canadian CF-18 fighters to intercept and escort the two Russian bombers from the area. The second occurred on July 4 when Tu-95 were intercepted by U.S. aircraft off the west coast of the United States, and U.S. fighters again escorted the Russian bombers from the area.[23]

In February 2013, two Russian Tu-95 Bear-H bombers capable of carrying nuclear weapons were intercepted by US jets while circling the western Pacific island of Guam.[24] The incident is considered highly unusual because Russian strategic bombers have not been known to conduct operations in vicinity of Guam from bases in the Russian Far East.[25]

In a near future, the strategic bombers Tu-160, Tu-95 and Tu-22M3 will receive their orders and instructions according to the principle of telegraph or SMS.[28]

Several other modification of the basic Tu-95/Tu-142 airframe have existed, but these were largely unrecognized by Western intelligence or else never reached operational status within the Soviet military. One of these modified Bears, known as the Tu-95V, was used to drop the Tsar Bomba. 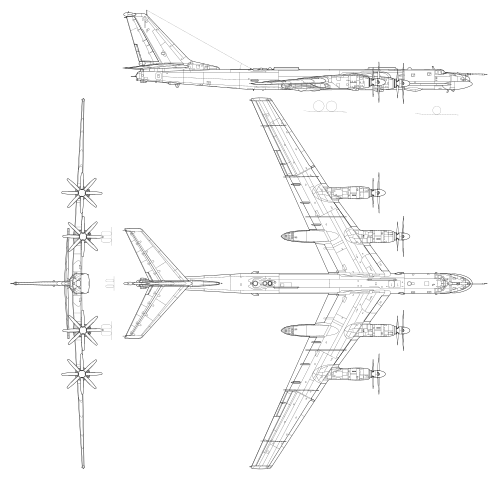