Military Wiki
Register
Don't have an account?
Sign In
Advertisement
in: Articles with German-language external links, Articles with hCards, Pages with broken file links,
and 9 more

The two Treblinka trials concerning the Treblinka extermination camp personnel have begun in 1964, twenty years after World War II. Held at Düsseldorf in West Germany, they were the two judicial trials in a series of similar war crime trials held during the early 1960s, such as the Jerusalem Adolf Eichmann trial (1961) and the Frankfurt Auschwitz Trials (1963–65), as a result of which the general public came to realize the extent of the crimes that some two decades earlier had been perpetrated in occupied Poland by Nazi bureaucrats and their willing executioners. In the subsequent years, separate trials dealt with personnel of the Bełżec (1963–65), Sobibor (1966), and Majdanek (1975–81) extermination camps.[1] 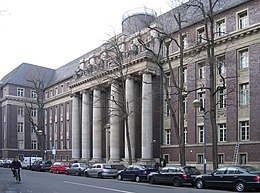 In 1946 Josef Hirtreiter was arrested in the course of the Allied investigations into the killing of disabled persons in the Hadamar Euthanasia Centre. Although not focused on Treblinka from the beginning, and not serving as an upbeat to the later Treblinka trials, the Hirtreiter trial is viewed by some historians as being part of these.[note 1] Hirtreiter could not be shown to have been criminally involved at Hadamar; however, he did confess to having worked in a camp near the Polish village of Małkinia where Jews were killed in a gas chamber. Further investigations showed that Hirtreiter had been stationed at the Treblinka extermination camp, where he supervised the victims' disrobement prior to their gassing. He was charged with participation in the mass-murder of Jews, particularly the killing of more than 10 persons, including infants. On 3 March 1951 Hirtreiter was sentenced to life imprisonment.

The crimes committed in the General Government territory of occupied Poland were investigated by the Central Agency from July 1959 by the German specialist in the Nazi prosecution Dietrich Zeug, present at the Eichmann trial. His inquiry led to the first arrest of Treblinka deputy commandant on December 2, 1959. Zeug received survivor testimonies from Yad Vashem which allowed him to examine German national archives for more clues. He was the first to establish the chain of command for Operation Reinhard.[2]

The first Treblinka trial began on 12 October 1964 and concerned eleven members of the SS camp personnel, or about a quarter of the total number of SS employed in the extermination of Jews brought aboard Holocaust trains to Treblinka. More than 100 witnesses were called, with incriminating evidence presented by Franciszek Ząbecki, a dispatcher employed by the Reichsbahn during the Holocaust train departures from across occupied Poland, proven by original German waybills he collected. The verdicts were pronounced on 3 September 1965:[3]

The second Treblinka trial also known as the Stangl trial,[1] was held from 13 May to 22 December 1970, five years after the first group trial for war crimes. In this trial, camp commandant Franz Stangl, expelled three years earlier from Brazil, finally stood accused. Stangl had previously assisted in killing handicapped people during Operation T4 (the Euthanasia Programme of the National Socialists), and, before moving on to Treblinka, had been the first commandant of Sobibor. Under his supervision, most of the Treblinka killings took place. He was sentenced to life imprisonment, and died in prison on 28 June 1971, during the appeal case.

This article incorporates information from this version of the equivalent article on this wikiNo language provided for the interwiki translation template!