Military Wiki
Register
Don't have an account?
Sign In
Advertisement
in: Articles incorporating text from Wikipedia, Austria-Hungary in World War I, Romania in World War I,
and 13 more

The Treaty of Bucharest was a peace treaty between Romania on one side and Austria-Hungary, Bulgaria, Germany and the Ottoman Empire on the other, following the stalemate reached after campaign of 1916–17 and Romania's isolation after Russia's unilateral exit from World War I (see Treaty of Brest-Litovsk). It was signed at Buftea, near Bucharest, on 7 May 1918.

Alexandru Marghiloman signed the treaty at Buftea (near Bucharest) on 7 May 1918. It had been ratified by the Chamber of Deputies on 28 June and by the Senate on 4 July 1918. However, King Ferdinand I of Romania refused to sign it.

Although Bulgaria received a part of Northern Dobruja, it continued to lobby Germany and Austria-Hungary for the annexation of the whole province, including the condominium established by the Treaty of Bucharest. After negotiations, a protocol regarding the transfer of the jointly administered zone in Northern Dobruja to Bulgaria was signed in Berlin, on 25 September 1918, by Germany, Austria-Hungary, the Ottoman Empire and Bulgaria. In compensation, Bulgaria agreed to cede the left bank of the Maritsa river to Turkey. However, this agreement was short-lived because after 4 days, on 29 September Bulgaria had to capitulate in the face of the advancing Allied forces (see also the Armistice with Bulgaria).

The treaty was denounced in October 1918 by the Alexandru Marghiloman government and subsequently nullified by the terms of the Armistice of 11 November 1918.

In 1919, Germany was forced in the Treaty of Versailles to renounce all the benefits provided by the Treaty of Bucharest in 1918.[2] The territorial transfers to Austria-Hungary and Bulgaria were annulled by the treaties of Saint-Germain (1919), Neuilly (1919) and Trianon (1920), respectively. 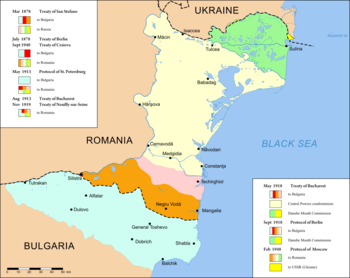 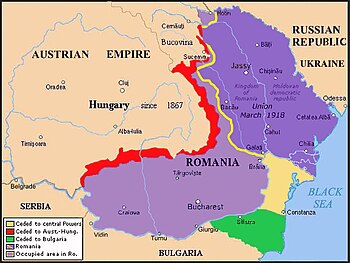 Romanian territories ceded to Austria-Hungary (red) and Bulgaria (green) through the Treaty of Bucharest. These changes were reversed by the Treaty of Versailles.