Military Wiki
Register
Don't have an account?
Sign In
Advertisement
in: Articles incorporating text from Wikipedia, 1753 births, 1816 deaths,
and 7 more 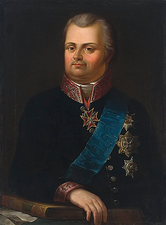 Tomasz Wawrzecki (1753–1816) was a distinguished Polish politician and military commander, a general of the Polish Army. During Kościuszko's Uprising in Warsaw he succeeded Tadeusz Kościuszko as the commander of the Polish forces. His surrender to Russian troops on November 16, 1794 marked the end of the uprising.

Tomasz Wawrzecki was born March 7, 1753 in his family manor in a small village of Widze (modern Vidzy, Vitsebsk Voblast, Belarus). Little is known of his early life. He was nominated by King Stanisław August of Poland to the rank of Grand Standard-bearer of Lithuania. A strong supporter of reforms of the Polish-Lithuanian Commonwealth and then the Kingdom of Poland, he was a member of the Four-Year Sejm and a partisan of the Society of the Friends of the Constitution.

He took part in the Russo-Polish War of 1792. After the outbreak of Kościuszko's Uprising of 1794, Wawrzecki founded and financed a number of military units to fight in the regions of Samogitia and Courland. At the same time he was also a plenipotentiary of the Supreme National Council, the de facto government of Poland. On October 16, 1794, he was promoted by Kościuszko to the rank of Lieutenant General. Following Kościuszko's defeat in the battle of Maciejowice, the Council (on insistence of Hugo Kołłątaj) nominated Wawrzecki as Kościuszko's successor as the commander in chief of the uprising. After the Battle of Praga he withdrew with the remnants of his forces to Radoszyce, where he disbanded his troops and surrendered himself to the Russians.

Kept prisoner until 1796, he was set free by Paul I of Russia and returned to Lithuania. During the existence of the Duchy of Warsaw he collaborated with the Russians. Afterwards Alexander I of Russia made him the minister of justice of the Kingdom of Poland. He died August 5, 1816 in Widze, where he was buried.