Timothy H. O'Sullivan (c. 1840 – January 14, 1882) was a photographer widely known for his work related to the American Civil War and the Western United States.

O'Sullivan was born in Ireland and came to New York City two years later with his parents. As a teenager, he was employed by Mathew Brady. When the Civil War began in early 1861, he was commissioned a first lieutenant in the Union Army (Joel Snyder, O'Sullivan's biographer could find no proof of this claim in Army records) and, over the next year, was present at Beaufort, Port Royal, Fort Walker, and Fort Pulaski. There is no record of him fighting. He most likely did civilian's work for the army such as surveying, and he took photographs in his spare time.[1]

After being honorably discharged, he rejoined Brady's team. In July 1862, O'Sullivan followed the campaign of Maj. Gen. John Pope's Northern Virginia Campaign. By joining Alexander Gardner's studio, he had his forty-four photographs published in the first Civil War photographs collection, Gardner's Photographic Sketch Book of the War. In July 1863, he created his most famous photograph, "The Harvest of Death," depicting dead soldiers from the Battle of Gettysburg.

He took many other photographs documenting the battle, including "Dead Confederate sharpshooter at foot of Little Round Top", "Field where General Reynolds fell", "View in wheatfield opposite our extreme left", "Confederate dead gathered for burial at the southwestern edge of the Rose woods", "Bodies of Federal soldiers near the McPherson woods", "Slaughter pen", and others.

In 1864, following Gen. Ulysses S. Grant's trail, he photographed the Siege of Petersburg before briefly heading to North Carolina to document the siege of Fort Fisher. That brought him to the Appomattox Court House, the site of Robert E. Lee's surrender in April 1865.

From 1867 to 1869, he was official photographer on the United States Geological Exploration of the Fortieth Parallel under Clarence King. The expedition began at Virginia City, Nevada, where he photographed the mines, and worked eastward. His job was to photograph the West to attract settlers. In so doing, he became one of the pioneers in the field of geophotography. O'Sullivan's pictures were among the first to record the prehistoric ruins, Navajo weavers, and pueblo villages of the Southwest.[citation needed] In contrast to the Asian and Eastern landscape fronts, the subject matter he focused on was a new concept. It involved taking pictures of nature as an untamed, pre-industrialized land without the use of landscape painting conventions. O'Sullivan combined science and art, making exact records of extraordinary beauty.

In 1870 he joined a survey team in Panama to survey for a canal across the isthmus. From 1871 to 1874 he returned to the southwestern United States to join Lt. George M. Wheeler's survey west of the 100th meridian west. He faced starvation on the Colorado River when some of the expedition's boats capsized; few of the 300 negatives he took survived the trip back East.[citation needed] He spent the last years of his short life in Washington, D.C., as official photographer for the U.S. Geological Survey and the Treasury Department.

O'Sullivan died in Staten Island of tuberculosis at age 42.[2]

"The Harvest of Death": Union dead on the battlefield at Gettysburg, Pennsylvania, photographed July 5–6, 1863[3] 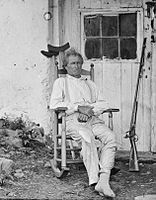 John Burns, a hero of the Battle of Gettysburg, 1863

Rock carved by drifting sand below Fortification Rock in Arizona, 1871.