Brébant served from 23 July 1908 to 14 June 1946 in the French Army. During his career he belonged to the following regiments:

During World War I, Brébant participated in the First Battle of the Marne and the Battle of Verdun.

During the Second World War from 1939 to 1940, he participated in the Battle of France. Then he was a prisoner in Germany in Oflag IV-D (Hoyerswerda, Lower Silesia).

A street of Guingamp (France) is now called "Col. Brébant" to honour him. It is planned to name a street where a green space in his name at Le Mans (France). 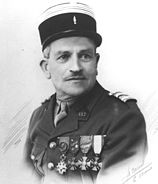 6 September 1914 Battle of the Marne. A troop that can no longer move at all costs will keep the land conquered and killed on the spot rather than reculer. Signer General Foch.

For chefs. Officers. Soldiers. To all the heroes known and anonymous, living and dead, who have triumphed over the avalanche of barbaric and immortalized his name in the world and for future centuries, the city of Verdun, inviolable and stand on its ruins, dedicate this medal as a sign of his gratitude. Verdun, 20 November 1916.
Community content is available under CC-BY-SA unless otherwise noted.
Advertisement