The Terracotta Army or the "Terracotta Warriors and Horses", is a collection of terracotta sculptures depicting the armies of Qin Shi Huang, the first Emperor of China. It is a form of funerary art buried with the emperor in 210–209 BC and whose purpose was to protect the emperor in his afterlife.

The figures, dating from around the late third century BC,[1] were discovered in 1974 by local farmers in Lintong District, Xi'an, Shaanxi province. The figures vary in height according to their roles, with the tallest being the generals. The figures include warriors, chariots and horses. Current estimates are that in the three pits containing the Terracotta Army there were over 8,000 soldiers, 130 chariots with 520 horses and 150 cavalry horses, the majority of which are still buried in the pits near by Qin Shi Huang's mausoleum.[2] Other terracotta non-military figures were also found in other pits and they include officials, acrobats, strongmen and musicians.

The Terracotta Army was discovered on 29 March 1974[3] to the east of Xi'an in Shaanxi province by a group of farmers when they were digging a water well around 1.6 km (1 mile) east of the Qin Emperor's tomb mound at Mount Li (Lishan),[4][5] a region riddled with underground springs and watercourses. For centuries, there had been occasional reports of pieces of terracotta figures and fragments of the Qin necropolis – roofing tiles, bricks, and chunks of masonry – having been dug up in the area.[6] This most recent discovery prompted Chinese archaeologists to investigate, and they unearthed the largest pottery figurine group ever found in China.

In addition to the warriors, an entire man-made necropolis for the Emperor has also been found around the first Emperor's tomb mound. The tomb mound is located at the foot of Mount Li as an earthen pyramid,[7] and Qin Shi Huangdi’s necropolis complex was constructed as a microcosm of his imperial palace or compound. It consists of several offices, halls, stables and other structures placed around the tomb mound which is surrounded by two solidly built rammed earth walls with gateway entrances. Up to 5 metres (16 feet) of reddish, sandy soil had accumulated over the site in the two millennia following its construction, but archaeologists found evidence of earlier disturbances at the site. During the digs near the Mount Li burial mound, archaeologists found several graves dating from the eighteenth and nineteenth centuries, where diggers had apparently struck terracotta fragments which were then discarded as worthless back into the back-filled soil.[6]

According to historian Sima Qian (145–90 BC), work on this mausoleum began in 246 BC soon after Emperor Qin ascended the throne (then aged 13), and the full construction later involved 700,000 workers.[8] Geographer Li Daoyuan, six centuries after the death of the First Emperor, recorded in Shui Jing Zhu that Mount Li was a favoured location due to its auspicious geology: "... famed for its jade mines, its northern side was rich in gold, and its southern side rich in beautiful jade; the First Emperor, covetous of its fine reputation, therefore chose to be buried there".[6][9] Sima Qian, in his most famous work, Shiji, completed a century after the mausoleum completion, wrote that the First Emperor was buried with palaces, towers, officials, valuable artefacts and wonderful objects. According to this account, there were 100 rivers simulated with flowing mercury, and above them the ceiling was decorated with heavenly bodies below which were the features of the land. Some translations of this passage refer to "models" or "imitations," those words however weren't used in the original text with no mention of the terracotta army.[8][10]

Recent scientific work at the site has found high levels of mercury in the soil of the tomb mound,[11] giving some credence to Sima Qian's account of the emperor's tomb. The tomb of Shi Huangdi appears to be a hermetically sealed space that is as big as a football pitch and located underneath the pyramidal tomb mound.[12][13] The tomb remains unopened, one possible reason may be concerns about the preservation of valuable artifacts once the tomb is opened.[12] For example, after their excavation, the painted surface present on some figures of the terracotta army began to flake and fade.[14] In fact, the lacquer covering the paint can curl in 15 seconds once exposed to the dry air of Xi'an and can flake off in just four minutes.[15] Later historical accounts suggested that the tomb had been looted by Xiang Yu, a contender for the throne after the death of the Emperor,[16][17][18] however there are indications that the tomb may not have been plundered.[19]

Only a section of the site is presently excavated, and photos and video recordings are prohibited in some viewing areas. Only a few foreign dignitaries, such as Queen Elizabeth II, have been permitted to walk through the pits to observe the army at close quarters.

The terracotta army figures were manufactured in workshops by government laborers and by local craftsmen, and the material used to make the terracotta warriors originated on Mount Li. The head, arms, legs and torsos were created separately and then assembled.[20] Studies show that eight face moulds were most likely used, and then clay was added to provide individual facial features.[21] Once assembled, intricate features such as facial expressions were added. It is believed that their legs were made in much the same way that terracotta drainage pipes were manufactured at the time. This would make it an assembly line production, with specific parts manufactured and assembled after being fired, as opposed to crafting one solid piece and subsequently firing it. In those times of tight imperial control, each workshop was required to inscribe its name on items produced to ensure quality control. This has aided modern historians in verifying that workshops that once made tiles and other mundane items were commandeered to work on the terracotta army. Upon completion, the terracotta figures were placed in the pits in precise military formation according to rank and duty.

The terracotta figures are life-sized. They vary in height, uniform and hairstyle in accordance with rank. Most originally held real weapons such as spears, swords, or crossbows. The figures were also originally painted with bright pigments, variously coloured in pink, red, green, blue, black, brown, white and lilac.[22][23] The coloured lacquer finish, individual facial features, and actual weapons used in producing these figures created a realistic appearance. Most of the original weapons were thought to have been looted shortly after the creation of the army, or have rotted away, and the colour coating has flaked off or greatly faded.

There are four main pits associated with the terracotta army.[24][25] These pits are located about 1.5 km east of the burial mound and are about 7 metres deep. The army is placed as if to protect the tomb from the east, where all the Qin Emperor's conquered states lay. Pit one, which is 230 metres long and 62 metres wide,[25] contains the main army of more than 6,000 figures.[26] Pit one has 11 corridors, most of which are over 3 metres wide, and paved with small bricks with a wooden ceiling supported by large beams and posts. This design was also used for the tombs of noblemen and would have resembled palace hallways. The wooden ceilings were covered with reed mats and layers of clay for waterproofing, and then mounded with more soil making them, when built, about 2 to 3 metres higher than ground level.[27] Pit two has cavalry and infantry units as well as war chariots and is thought to represent a military guard. Pit three is the command post, with high-ranking officers and a war chariot. Pit four is empty, seemingly left unfinished by its builders.

Some of the figures in pit one and two showed fire damage and remains of burnt ceiling rafters have also been found;[28][29] these, together with the missing weapons, have been taken as evidence of the reported looting by Xiang Yu and its subsequent burning. The burning is thought to have caused the collapse of the roof which crushed the army figures below, and the terracotta figures presently displayed have been reconstructed from fragments of the crushed figures.

A large number of other pits which formed the necropolis have also been excavated.[30] These pits may lie within or outside the walls surrounding the tomb mound. These accessory pits variously contain bronze carriages, terracotta figures of entertainers such as acrobats and strongmen, officials, stone armour suits, burials sites of horses, rare animals and labourers, as well as bronze cranes and ducks in an underground park.[31] 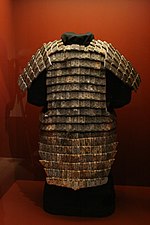 Weapons such as swords, spears, battle-axe, scimitars, shields, crossbows and arrowheads were found at the pits of the terracotta warriors.[24][32] Some of these weapons such as the swords are still very sharp and found to be coated with chromium oxide. This layer of chromium oxide is 10–15 micrometre thick and has kept the swords rust-free and in pristine condition after 2,000 years.[33][34][35] Many swords contain an alloy of copper, tin and other elements including nickel, magnesium, and cobalt.[36] Some carry inscriptions giving dates of manufacture between 245 and 228 BC, indicating they were actual weapons used in warfare before their burials.[37]

An important element of the army is the chariot, and four types of chariots were found. In battle the fighting chariots form pairs at the head of a unit of infantry. The principal weapon of the charioteers was the ge or dagger-axe, an L-shaped bronze blade mounted on a long shaft used for sweeping and hooking at the enemy. Infantrymen also carried ge on shorter shafts, ji or halberds, and spears and lances. For close fighting and defence, both charioteers and infantrymen carried double-edged straight swords. The archers carried crossbows with sophisticated trigger mechanisms capable of firing arrows over 800 meters.[37]

A number of terracotta warriors and other artifacts were exhibited to the public at the Forum de Barcelona in Barcelona between 9 May and 26 September 2004, and it was their most successful exhibition ever.[43] The same exhibition was then presented at the Fundación Canal de Isabel II in Madrid between October 2004 and January 2005 and it was also their most successful ever by number of visitors.[44] From December 2009 to May 2010 the exhibition was shown in the Centro Cultural La Moneda in Santiago de Chile.[45]

The exhibition has travelled to North America and visited museums such as the Asian Art Museum of San Francisco, Bowers Museum in Santa Ana, California, Houston Museum of Natural Science, High Museum of Art in Atlanta,[46] National Geographic Society Museum in Washington, D.C., and the Royal Ontario Museum in Toronto.[47] Subsequently the exhibition travelled to Sweden and was hosted in the Museum of Far Eastern Antiquities between 28 August 2010 and 20 January 2011.[48][49] An exhibition entitled 'The First Emperor – China's Entombed Warriors', presenting 120 artefacts from the First Emperor's burial site, was hosted at the Art Gallery of New South Wales, between 2 December 2010 and 13 March 2011.[50] An exhibition entitled "L'Empereur guerrier de Chine et son armée de terre cuite" ("The Warrior-Emperor of China and his terracotta army"), featuring artifacts including statues from the First Emperor's mausoleum, was hosted by the Montreal Museum of Fine Arts from 11 February 2011 to 26 June 2011.[51]

A rank of soldiers. One of the soldiers on the left is missing his head, a result of the statues being made in pieces and then assembled.

Note how the faces of these two soldiers differ from each other. Each statue was constructed to be unique.

A cavalryman and his mount.

The Terracotta Warriors were once painted. Today only a handful of statues contain small amounts of paint. Also notice the detail put into the soles of the warrior's shoes.

Bronze chariot for the emperor.