A tampion is a wooden plug, or a metal, canvas, rubber or plastic cover, for the muzzle of a gun. They can be found on both land based artillery and naval guns. Naval tampions have developed into works of art.

Although the cannons of ships of the line were protected as they were retracted inside the ships, many smaller vessels had exposed gundecks which required a plug to protect inside of the barrels. Later, the invention of mobile gun turrets meant that all guns were constantly exposed to water. Hence, when not in use, naval guns were protected by wooden, and later rubber muzzle plugs. Typically, rubber and plastic tampions can be shot through in case of an emergency. Plastic tampions are normally designed to be expelled by the build-up of pressure in the barrel as the first shell is fired.

Over time, tampions were embossed or engraved with the arms of the unit, and they became collector's items. Nowadays, even warships that typically would not carry heavy guns, such as submarines, have their own badges in the shape of a tampion.

The 100mm gun of the Prairial sealed by a tampion 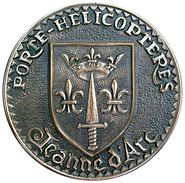 tampion of the Jeanne d'Arc 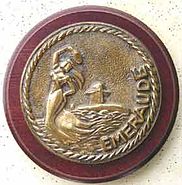 The tampions of the main guns of HMS Queen Elizabeth in 1917
Community content is available under CC-BY-SA unless otherwise noted.
Advertisement