The TAI/AgustaWestland T129 ATAK is a twin-engine, tandem seat, multi-role, all-weather attack helicopter based on the Agusta A129 Mangusta platform. The T129 was developed by Turkish Aerospace Industries (TAI), with partner AgustaWestland. The helicopter is designed for advanced attack and reconnaissance in hot and high environments and rough geography in both day and night conditions.[6]

The ATAK programme was begun to meet the Turkish Armed Forces' requirements for an attack and tactical reconnaissance helicopter. The T129 is the result of the integration of Turkish developed high-tech avionics, air-frame modifications, and weapon systems onto the combat proven AgustaWestland A129 airframe, with upgraded engines, transmission and rotor blades. It is in use by the Turkish Army, and is being offered to other services.[7][8]

The ATAK programme was begun to meet the Turkish Armed Forces' requirements for an attack and tactical reconnaissance helicopter.[9] Turkey announced on 30 March 2007 that it had decided to negotiate with AgustaWestland to co-develop and produce 51 (with 40 options) attack helicopters based on the Agusta A129 Mangusta.[10][11] It is to be assembled in Turkey by Turkish Aerospace Industries (TAI) as the T129. On 7 September 2007, a $1.2 billion contract was signed.[12][13][14]

On 22 June 2008, the agreement between TUSAS Aerospace Industries (TAI) and AgustaWestland formally entered into force. Under the agreement, TAI will develop an indigenous mission computer, avionics, weapons systems, self-protection suites and the helmet-mounting cuing systems. Tusaş Engine Industries (TEI) will manufacture the LHTEC CTS800-4N engines under licence.[15] Under the agreement, Turkey has full marketing and intellectual property rights for the T129 platform; Turkey can export also the platform to third party nations, excluding Italy and the United Kingdom.[16] However, the T129's LHTEC CTS800-4N gives the United States a veto over any prospective export sales.[17]

The T129 was optimized for hot and high conditions.[18] It has several key improvements over the original A129 inline with the requirements of the Turkish Army.[19] The T129 will carry 12 Roketsan-developed UMTAS anti-tank missiles (Turkish indigenous development similar to Hellfire II).[20] The T129 features a 20 mm gatling-style cannon in a nose turret. It can carry a combination of 70 mm rocket pods, Stinger air-air missile pods, and gun pods on its stub wing pylons.[21] Electro-optical reconnaissance, surveillance and targeting system was designed by ASELSAN.[citation needed] On 16 July 2007, the Scientific and Technological Research Council of Turkey (TUBITAK), Meteksan Savunma Sanayii AŞ and Bilkent University formed a consortium to develop an advanced millimetre wave radar (MILDAR), similar to the Longbow and the IAI/ELTA radars, intended to enter service in 2009.[22][23] MILDAR was successfully completed in February 2012.[24]

In 2007, it was reported that one helicopter will be kept by the Turkish Ministry of Defense and used as a test-bed for systems development. The remaining 50 helicopters will be delivered to the Turkish Army. An optional 40 further T129 helicopters will be produced if necessary.[25] These 50 T129s are to be designated T129B.[8] In November 2010, Turkey ordered an additional nine T129 helicopters to increase its total ordered to 60.[26][27] These T129s were for an urgent Turkish Army operational requirement and was built by TAI for delivery in 2012, one year prior to the delivery of the previously ordered 51 helicopters.[12][28] These T129s are designated T129A, lacking advanced anti-tank missiles. As a result of delays, the T129As entered service in 2014.[8]

On 28 September 2009, the T129's maiden flight took place when P1 prototype flew at AgustaWestland's facilities in Vergiate, Italy.[29] On 19 March 2010, the first T129 prototype (P1) conducted high altitude hover tests near Verbania, Italy following the completion of several successful test flights. During the hover test, T129 P1 lost its tail rotor at 15,000 feet. Test pilot Cassioli regained enough control to steer away from residential area before crashing; the crew escaped without serious injuries.[30][31] On 17 August 2011, TIA announced the first successful flight of the T129 prototype "P6", the first of three prototypes to be assembled in Turkey.[32]

In 2013, media reports claimed that the first batch of helicopters delivered to Turkish Army for trials did not meet the requirements of the contract, specifically in terms of "vibration, balance, weight". The T129 was nose-heavy; to resolve this, 137 kg was added to the tail, causing the total weight to exceed the specified requirement. The higher weight may decrease the T129's service ceiling, which is detrimental for operating under hot and high conditions, like those found in Southeastern Anatolia. The Undersecretariat for Defense Industries will adjust the contract in accordance. Experts expect weight reductions as development continues.[33] In August 2015, TAI formally delivered the batch of the first nine T129 ATAK helicopters to the Turkish Land Forces after completing qualification testing.[34]

HAVELSAN developed a simulator system for the T129 and presented at the International Defence Industry Fair (IDEF) 2017.[35]

In May 2014, the Turkish Army formally inducted the first nine T129s into service; these initial rotorcraft were to a less advanced interim EDH A-model variant, intended to replace some of the ageing AH-1s in use prior to the introduction of the more capable T129B variant to service.[36] On 25 April 2015, a pair of T129s were used in combat for the first time in a counter-terrorism operation in the Turkish province of Siirt.[37] Delivery of the final EDH-standard T129s took place on 31 July 2015.[38] On 10 February 2018, during the Turkish military operation in Afrin, a T129 of the Turkish Army was shot down by Kurdish YPG anti-aircraft fire in Kırıkhan district of Hatay Province. It was later confirmed by the Turkish Armed Forces and President Erdoğan.[39]

In 2011, Saudi Arabia asked Turkey to enter a tender to produce attack helicopters for the Saudi Air Force.[46] In July 2012, it was reported that the Philippines received an offer from Italy for AgustaWestland attack helicopters (either A129 or T129).[47]

In January 2013, a media report stated that South Korea's attack helicopter competition included the T129 in the final three bidders with the Bell AH-1Z Viper and the Boeing AH-64 Apache.[48][49] However, the AH-64E Apache was chosen in April 2013.[50] Media reports in February 2013 indicated Azerbaijan had ordered 60 T129 helicopters. However it was later denied by TAI.[51][52]

TAI hopes to launch talks for the sale of the T129 to the Libyan National Army[59] and Polish Land Forces.[60]

T129A EDH (Erken Duhul Helikopteri or Early Delivery Helicopter)
T129A is the "combat support" version equipped with a 20 mm gatling gun and rounds and can carry 70 mm (2.75 in) rockets; nine T129As have been ordered.[62] Six helicopters have been delivered to the Turkish Army. The T129As are to be upgraded to the T129B standard.[8]

T129B
T129B is the "multi-role" version equipped with the leading edge electronic warfare systems. 51 helicopters are to be produced, with one to be used as a weapons testbed. The T129B is armed with a 20 mm gatling gun and can carry a payload of 8 UMTAS, 12 Roketsan CIRIT, and 2 AIM-92 Stinger missiles.[8] 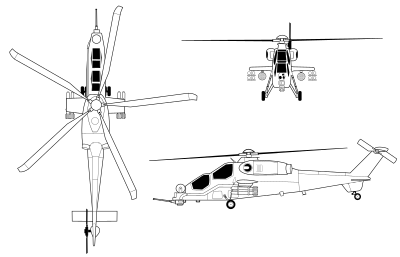