The Svea Life Guards (Swedish language: Svea livgarde ), also I 1, was a Swedish Army infantry regiment that was active in various forms 1521–2000. The unit was based in the Stockholm garrison in Stockholm and belonged to the King's Life and Household Troops (Kungl. Maj:ts Liv- och Hustrupper) until 1974.[4]

Svea Life Guards, the Swedish Army's first guard infantry regiment, originated from the Trabant Corps that surrounded the first Vasa Kings and is said to have been formed in 1526. The Trabant Corps seems to have, at least in part, been included in the enlisted regiment established in 1613, which consisted mostly of Germans, which under the names of the King's Life and Court Regiment (Konungens liv- och hovregemente), the Yellow Regiment (Gula regementet) and the Yellow Brigade (Gula brigaden) participated in Gustavus Adolphus' campaign in Germany. The regiment's first two companies formed the king's lifeguard and consisted mostly of Swedes. The 60 survivors of the guard after the Battle of Lützen, followed the king's corpse to Sweden, after which the guard, whose staff has been increased to 148 men, united in 1644 with one established regiment in the Baltic governorates and one established regiment in Svealand into a large court regiment of which Magnus Gabriel De la Gardie was the commander.[5]

Most of the regiment was disbanded after 1660, but the part still in Sweden was developed into a Guard or Court Regiment. Eventually increased to 24 companies, it participated in Charles XII's War and was lost after the Battle of Poltava, but was then reestablished. The Life Guards as the regiment then was commonly known, was given the name Svea Guards (Svea garde) in 1792.[5] The regiment had its barracks at Fredrikshov Castle in Östermalm, Stockholm from 1802.[6] In 1808 it lost for a short time its dignity of being a guard and was then called Fleetwood's Enlisted Regiment (Fleetwoodska värvade regementet). It was in 1809 again called Svea Guards (Svea garde) and received the name Svea Life Guards (Svea livgarde) the same year. From having been divided into 10 companies of 80 men, the regiment was in 1831 divides into eight companies with a total of 820 men. After the 1901 Defence Bill it increased into 12 companies (three battalions) and 1 machine gun company, but its number strength of volunteers was reduced to 555 men (music staff included) and after the 1914 Defence Bill further to 540 men.[5]

Svea Life Guards was an enlisted regiment and its staff, which was stationed in the barracks at Fredrikshov, was permanently employed. In the early 1800s compulsory military service in Sweden was introduced on a modest scale.[7] As a result of the increased multiform unrest in Europe during the 1850s, it increased the conscripts appropriated exercise period from 12 to 30 days, spread over the first two years of conscript military service. These exercises took place during the summer. However, when the space in the barracks was too small to accommodate these conscripts, they were placed in bivouac shelters at Ladugårdsgärdet.[7] The cramped space at Fredrikshov and the unhygienic conditions there and the ever-increasing need to place conscripts in barracks, forced the decision on the construction of modern barracks for the two foot guards regiments, Svea Life Guards and Göta Life Guards. It was decided that the plateau above Fredrikshov, was the most well-situated location for the barracks, adjacent to the large practice field, which northern Djurgården then still was.[7] Palace intendant, Professor Ernst Jacobsson, was instructed to carry out the drawings and in the autumn of 1888 Svea Life Guards could during great celebrations, led by their head, King Oscar II, take possession of their new barracks.[7]

In the early 1940s the decades ago planned relocation of the regiment to Järvafältet became reality. On 5 October 1946 the Svea Life Guards officially left its barracks at Linnégatan in Östermalm, Stockholm and this took place at a ceremony in the park at the memorial stone. The then executive officer, colonel Gösta von Stedingk handed the memorial stone over to the City of Stockholm, represented by the municipal commissioner of the Stockholm Central Board of Administration (Stadskollegium), Yngve Larsson. It then left Stockholm which had been its location for more than 400 years.[8] The regiment moved in 1947 to Sörentorp in Solna. The design of the area was carried out by the Royal Fortifications Administration. The area was given a relatively free pooled plan, and Bertil Karlén was the architect of the buildings.[9] In 1970 Svea Life Guards moved again, this time to an area at Granhammar Castle in Kungsängen.[9]

From 1975 to 1984, the regiment's duties were maintain a number of military units in the war organization and conduct war planning for these. The regiment was also responsible for Kungsängen's barracks area with associated exercise and firing range as well as some support to other units in the garrison.[10] Included in the maintenance of war units were basic recruitment of officers but internal officer training and education of the conscripts. Officer training was also carried out to maintain the war units. The regimental staff and training units also participated extensively in state ceremonial activities on behalf of the Commandant General and the Commandant in Stockholm.[10] The regiment consisted mainly of a staff, a training unit, including a training battalion and department for management of exercises and firing range, and a support unit with subdivisions. The Swedish Armed Forces ABC-Defence School was located in Kungsängen and was included as a section in the unit.[10] 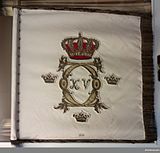 Unlike the other infantry and armor regiments, which have a constant unit designation, the Svea Life Guards has the Swedish monarch's monogram.[11]