The Svea Engineer Corps (Swedish language: Svea ingenjörkår ), designation Ing 1, was a Swedish Army engineer unit that traced its origins back to the 19th century. It was disbanded in 1997. The unit was garrisoned in Uppland and Södermanland.

The unit has its origins in Sapper Company raised in 1855. The company was reorganised to a battalion-sized unit in 1864 and was renamed Sapper Corps. This unit was transformed to a pontoon bridge battalion, Pontoon Battalion, in 1867. The battalion then changed its name once again in 1893 to Svea Engineer Battalion, and in 1902 to Svea Engineer Corps, when it gained the designation Ing 1 (1st Engineer Regiment). That same year, the field telegraphy company that had been attached to the unit became independent and later formed Uppland Regiment.

Svea Engineer Corps was upgraded to a regiment in 1957 and was renamed Svea Engineer Regiment. It was then downgraded to a battalion unit again in 1994, just three years before the unit was disbanded, in 1997. The regiment was garrisoned in Stockholm, Solna and Södertälje during its lifetime.

The colour of Ing 2 was presented on 26 September 1935 by His Majestyg the King Gustaf V at the 300th Anniversary of the Fortifikationen ("Royal Engineers") in Stockholm. It was carried from 1 January 1998 by the Norrland Engineer Corps. When the colour was taken out of use, it was not handed over to the Swedish Army Museum but was exhibited at Ing 1's museum on Laxön. The colour couldn't therefore be admitted to the Swedish Army Museum collection until 2012. 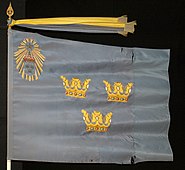 The coat of the arms of the Svea Engineer Regiment (Ing 1) 1977–1994 and the Svea Engineer Corps (Ing 1) 1994–1997. Blazon: "Azure, the Swedish minor coat-of-arms three open crowns placed two and one The shield surmounted a cluster of rays coming down from a mullet, or".[2]

In 1997, Svea ingenjörskårs (Ing 1) minnesmedalj ("Svea Engineer Corps (Ing 1) Commemorative Medal") i silver (SveaingSMM) of the 8th size was established. The medal is oval and the medal ribbon is divided in black, yellow and black moiré.[3]

Regimental commanders and battalion and corps commanders between 1900 and 1997.