View source
watch 01:36
We're Getting Mutants in the MCU - The Loop
Do you like this video?
Play Sound
For the World War II mixed-power prototype, see Sukhoi Su-6.

The Sukhoi Su-7 (NATO designation name: Fitter-A) was a swept wing, supersonic fighter aircraft developed by the Soviet Union in 1955. Originally, it was designed as tactical, low-level dogfighter, but was not successful in this role. On the other hand, soon-introduced Su-7B series became the main Soviet fighter-bomber and ground-attack aircraft of the 1960s. The Su-7 was rugged in its simplicity but its shortcomings included short range and low weapon load.[1]

On 14 May 1953, after Joseph Stalin's death, the Sukhoi OKB was reopened[2] and by the summer, it began work on a swept-wing front-line[N 1] fighter. The first prototype, designated S-1, was designed to use the new Lyulka AL-7 turbojet engine. It was the first Soviet aircraft to utilize the all-moving tailplane and a translating centerbody, a movable cone in the air intake for managing airflow to the engine at supersonic speeds.[3] The aircraft also had a dramatic wing sweep of 60°, irreversible hydraulically boosted controls, and an ejection seat of OKB's own design.[2]

On 31 July 1958, Soviet tactical aviation (Frontovaya Aviatsiya,[N 1] фронтовая авиация) tasked Sukhoi with developing a ground-attack variant of the Su-7, which could replace the scrapped Ilyushin Il-10. The resulting prototype, S-22, incorporated structural refinements for high-speed, low-altitude operations. It first flew in March 1959, and entered service in 1961 as the Su-7B.[3]

Operationally, Su-7s were hampered by a high landing speed of 340–360 km/h,[4] as dictated by the thin, highly-swept wing. Combined with poor visibility from the cockpit, and lack of an instrument landing system, it made operations very difficult, especially in poor weather or on poor airfields.[5] In 1961-1962, Sukhoi experimented with blown flaps on S-25 but the benefit was too small to warrant implementation. JATO rockets tested on S-22-4 proved more useful and were incorporated into Su-7BKL. Attempts to improve takeoff and landing performance eventually resulted in the Sukhoi Su-17.

The front-line[N 1] fighter version saw limited operational use in the Far East from 1958, but by 1959, a decision was made to proceed with production of the MiG-21, and less than 200 units were deployed. The Su-7A was retired in 1965.[2] They never saw combat.

Su-7B and its variants became the main Soviet ground-attack aircraft of the 1960s. They were also widely exported (691 planes,[2] including also some trainers). However, the very short combat radius and need for long runways limited its operational usefulness. On the other hand, despite its notoriously heavy controls, the Su-7 was popular with pilots for its docile flight characteristics, simple controls and considerable speed even at low altitudes. It also had a reputation for easy maintenance. From 1977-1986 the Su-7s remaining in Soviet service have been replaced by Su-17 and MiG-27.

The Su-7 saw combat with Egypt in the 1967 Six Day War, the subsequent War of Attrition, and saw use in the Yom Kippur War by the Egyptians to attack Israeli ground forces.

The Indian Air Force (IAF) used the Su-7 extensively in the 1971 war with Pakistan. Six squadrons, totaling in 140 aircraft, flew almost 1,500 offensive sorties during the war,[4] and undertook the bulk of the daytime attack efforts. The IAF managed to retain a very high operational tempo with its Su-7s, peaking at a sortie rate of six per pilot per day.[4] Fourteen Su-7s were lost during the war, mostly due to AA fire.[4] After the war was over, it was found that the aircraft had a high survivability, being able fly home safely despite receiving heavy damage. For example, Wing Commander H. S. Mangat's Su-7 was badly damaged by a Sidewinder missile fired from PAF MiG-19. The impact was so severe that half the rudder was missing, the elevators, ailerons and flaps were severely damaged, and half the missile was stuck in the chute pipe.[4] The pilot made it back to his base. The death of at least one Indian pilot can be attributed, at least indirectly, to poor cockpit design. A pilot set his seating at a dangerous position "because he found the bomb sight and the front gun sight easier to operate" while in that position, and was killed on ejection.[6] 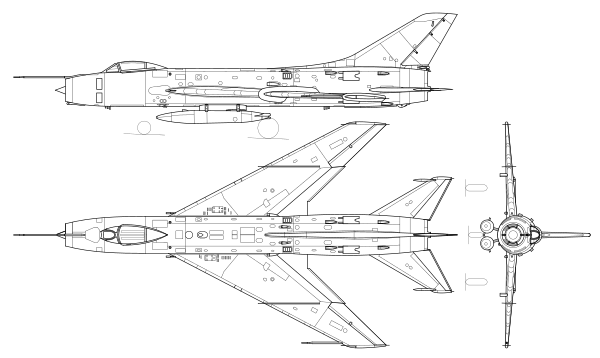