Military Wiki
Register
Don't have an account?
Sign In
Advertisement
in: Articles incorporating text from Wikipedia, Stratford-upon-Avon, Museums in Warwickshire,
and 2 more

Stratford Armouries is an Arms and Armour museum on the outskirts of Stratford-upon-Avon. The museum contains the personal arms and armour collection of James Wigington and is open to the public.

The Wigington family arrived in Warwickshire around 1750. In the nineteenth century James's Great Grandfather Thomas Mabbutt was the managing director of the Abingdon Gunworks Company in Birmingham manufacturing Snider, Chassepot and Martini guns. Stratford Armouries was built in 2007 on an 86-acre (350,000 m2) site - the former RAF Snitterfield. The museum houses the family's private collection of arms and armour gathered over 250 years in the trade.

The museum features a wide range of exhibits - the most noteworthy include a life-sized armoured Indian elephant, a cannon dating from 1450, and a giant crossbow modelled on Leonardo da Vinci's original design. The elephant armour was designed and constructed by Terry English, a famous armourer who has worked on several famous films including the Harry Potter series.[1] The cannon named the Lantaka cannon is considered to be one of the oldest examples of a cannon on display dating from 1450 salvaged from an early modern Dutch Naval vessel. The giant crossbow's arms measure 80 feet (24 m) wide and 50 feet (15 m) long,[2] and was constructed by several experts attempting to see whether his design was a fantasy or development hundreds of years before its time.[3]

"Shield Displayed in the Indian Gallery" 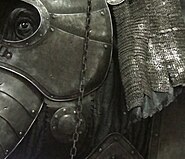