The Steyr-Mannlicher M1895 rifle is a bolt-action rifle, designed by Ferdinand Ritter von Mannlicher that used a refined version of his revolutionary straight-pull action. It was nicknamed the "Ruck-Zuck" ("right now" or "very quick") by Landsers (German slang for "troops"). It was initially adopted and employed by the Austro-Hungarian Army throughout World War I, and retained post-war by both the Austrian and Hungarian armies. The main foreign user was Bulgaria, which, starting in 1903, acquired large numbers and continued using them throughout both world wars. Numbers of these rifles also saw use in World War II, particularly by second line, reservist, and partisan units in Romania, Yugoslavia, Italy and to lesser degree, Germany. Post war many were sold as cheap surplus, with some finding their way to the hands of African guerrillas in the 1970s, and many more being exported to the US as sporting and collectible arms.

The M1895 is unusual in employing a straight-pull bolt action, as opposed to the more common rotating bolt-handle of other rifles. It consequently renowned for combining a high rate of fire (around 35 rounds per minute) with reliability and sturdiness, although this requires decent care and maintenance with an extractor that is vulnerable to breakage due to a lack of primary extraction. The weapon was issued with a ten-inch blade knife bayonet that was unusual in that the edge faced upwards when mounted on the rifle. The M1895 was originally chambered in the 8 mm M.1893 scharfe Patrone (8×50mmR Mannlicher) cartridge. Between the World Wars, both Austria and Hungary converted the majority of their rifles to fire the more powerful (8×56mmR) round. Greece[2] and Yugoslavia[3] converted at least some of their captured M1895s to 7.92×57mm Mauser, fed by stripper clips instead of the original model's en bloc clip system. This conversion was designated M95/24 in Greece and M95M in Yugoslavia. The M95/24 is often mistakenly attributed to Bulgaria, but 8x57mm IS was never a standard caliber of the Bulgarian military.[4] These conversions are prized by collectors for their relative scarcity and chambering in a commonly available round, but suffer from a fragile extractor and a lack of replacement parts.

The M1895 bolt also served as an almost exact template for the ill-fated Canadian M1905 Ross rifle, though the later M1910 used a complicated interrupted-thread instead of two solid lugs. 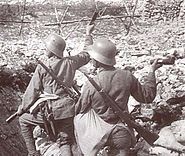 5-round en bloc clip of 8×56mmR ammunition being loaded into an M95 rifle
Community content is available under CC-BY-SA unless otherwise noted.
Advertisement