The Russian acronyms SPETSNAZ (spetsialnogo naznacheniya) and OSNAZ (osobogo naznacheniya), both meaning "special purpose", are general terms used for a variety of special operations forces (or regular forces assigned to special tasks). They are syllabic abbreviations typical of early Soviet-era Russian, although many Cheka and Internal Troops units (such as OMSDON) used osobogo naznacheniya in their full names.

Spetsnaz later referred to special purpose or special operations forces, and the word's widespread use is a relatively recent, post-perestroika development in Russian language. The Soviet public used to know very little about their country's special forces until many state secrets were disclosed under the glasnost ("openness") policy of Mikhail Gorbachev during the late 1980s. Since then, stories about spetsnaz and their supposedly incredible prowess, from the serious to the highly questionable, have captivated the imagination of patriotic Russians, particularly in the background of the decay in military and security forces during perestroika and the post-Soviet era. A number of books about the Soviet military intelligence special forces, such as 1987's Spetsnaz: The Story Behind the Soviet SAS by defected GRU agent Viktor Suvorov, helped introduce the term to the Western public as well. 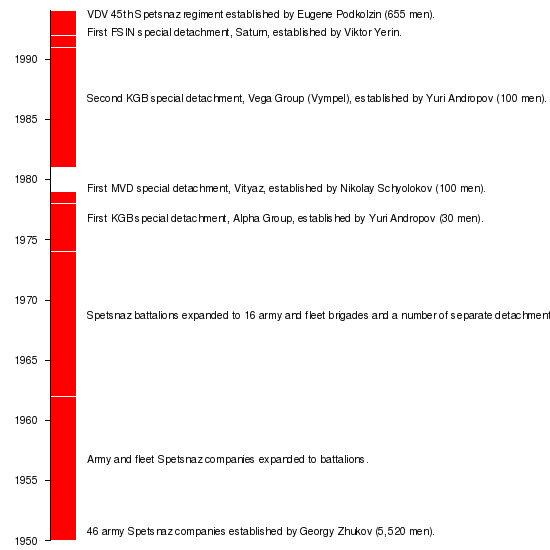 The concept of using special tactics and strategies was originally proposed by Russian military theorist Mikhail Svechnykov (executed during the Great Purge in 1938), who envisaged the development of unconventional warfare capabilities to overcome disadvantages faced by conventional forces in the field. Its implementation was begun by the "grandfather of the spetsnaz", Ilya Starinov.

During World War II, the Red Army reconnaissance and sabotage detachments were formed under the supervision of the Second Department of the General Staff of the Soviet Armed Forces. These forces were subordinate to front commanders.[1] The infamous NKVD internal security and espionage agency also had their own special purpose (osnaz) detachments, including many saboteur teams who were airdropped into enemy-occupied territories to work with (and often take over and lead) the Soviet Partisans.

In 1950, Georgy Zhukov advocated the creation of 46 military spetsnaz companies, each consisting of 120 servicemen. This was the first use of "spetsnaz" to denote a separate military branch since World War II. These companies were later expanded to battalions and then to brigades. However, some separate companies (orSpN) and detachments (ooSpN) existed with brigades until the dissolution of the Soviet Union.

The spetsnaz included fourteen army brigades, two naval brigades and a number of separate detachments and companies, operating under the Main Intelligence Directorate (GRU) and collectively known as Spetsnaz GRU. These units and formations existed in the highest-possible secrecy, and were disguised as Soviet paratroopers (Army spetsnaz) or naval infantrymen (Naval spetsnaz) by their uniforms and insignia.

Twenty-four years after the birth of Spetsnaz, the first counter-terrorist unit was established by KGB head Yuri Andropov. From the late 1970s through the 1980s, a number of special-purpose units were created in the KGB and the Ministry of Internal Affairs (MVD). During the 1990s, special detachments were established within the Federal Penitentiary Service (FSIN) and the Airborne Troops (VDV). Some civil agencies with non-police functions have created special units also known as spetsnaz, such as the Leader special centre in the Ministry of Emergency Situations (MChS).

The elite units of the Armed Forces of the Russian Federation were formerly controlled, for the most part, by the military-intelligence GRU (Spetsnaz GRU). They were heavily involved in secret operations and training pro-Soviet forces during the Cold War and in the wars in Afghanistan during the 1980s and Chechnya during the 1990s and 2000s. The Russian Airborne Troops (VDV, a separate branch of the Russian Armed Forces) have a 45th Independent Guards Spetsnaz Regiment. Since 2010, as a result of the 2008 military reforms, GRU special forces are under the control of the Ground Forces.

Most military Spetsnaz units are known by their type of formation (company, battalion or brigade) and a number, similar to other Soviet or Russian military units. Two exceptions were the ethnic Chechen Special Battalions Vostok and Zapad (East and West) that existed during the 2000s.

The Center of Special Operations of the FSB (CSN FSB, центр специального назначения ФСБ) is officially tasked with combating terrorism and protecting the constitutional order of the Russian Federation. The CSN FSB consists of three operative divisions: Department A (Spetsgruppa Alfa), Department V (Spetsgruppa Vympel) and the Special Purpose Service. CSN FSB headquarters is a large complex of buildings and training areas, with dozens of hectares of land and scores of training facilities. The average training period for a CSN officer is about five years.[4]

Alpha Group is a counter-terrorist unit created in 1974. It is a professional unit, consisting of about 700 operators and support personnel in five operational detachments. Most are stationed in Moscow, with the remainder in three other cities: Krasnodar, Yekaterinburg and Khabarovsk. All Alpha operators undergo airborne, mountain and counter-sabotage dive training. Alpha has operated in other countries, most notably Operation Storm-333 (when Alpha and Zenith detachments supported the 154th Independent Spetsnaz Detachment—known as the "Muslim Battalion"—of the GRU on a mission to overthrow and kill Afghan president Hafizullah Amin).[5]

"B" (Vympel or Vega, among other names) was formed in 1981, merging two elite Cold War-era KGB special units—Cascade (Kaskad) and Zenith (Zenit)—which were similar to the CIA's Special Activities Division (responsible for covert operations involving sabotage and assassination in other countries) and re-designated for counter-terrorist and counter-sabotage operations. It is tasked with the protection of strategic installations, such as factories and transportation centers. With its Alpha counterparts, it is heavily used in the North Caucasus. Vympel has four operative units in Moscow, with branch offices in nearly every city containing a nuclear power plant.

Little is known about the Special Purpose Service, but it participates in FSB special operations in the North Caucasus and guards government officials. With the Center of Special Operations and its elite units, many FSB special forces units operate at the regional level. These detachments are usually known as ROSN or ROSO (Regional Department of Special Designation), such as Saint Petersburg's Grad (Hail) or Murmansk's Kasatka (Orca). The foreign intelligence service, SVR, has its own paramilitary special force known as Zaslon (Barrier or Shield).

The Ministry of Internal Affairs (MVD) spetsnaz includes a number of Russian Internal Troops (VV, successor to the Soviet Internal Troops) paramilitary units to combat internal threats to the government, such as insurgencies and mutinies. These units usually have a unique name and official OSN number, and some are part the ODON (also known as Dzerzhinsky Division). The following is a list of Internal Troops OSNs (отряд специального назначения, "special purpose detachment") in 2012:[6]

In addition to Internal Troops, the MVD has Politsiya (formerly Militsiya) police special forces stationed in nearly every Russian city. Most of Russia's special-police officers belong to OMON units, which are primarily used as riot police and not considered an elite force—unlike the SOBR (known as the OMSN from 2002 to 2011) rapid-response units consisting of experienced, better-trained and -equipped officers. The Chechen Republic has unique and highly autonomous special police formations, supervised by Ramzan Kadyrov and formed from the Kadyrovtsy, including the (Akhmad or Akhmat) Kadyrov Regiment ("Kadyrov's spetsnaz").

Servicemen of Russian Internal Troops' special forces, as well as officers of special police formations and members of special units of the FSIN and FSKN, may compete for the distinction of wearing the krapovyi beret (maroon beret, Краповый берет), awarded to the "most professional, physically and morally fit" sergeants and officers. Competitions are hosted twice a year by former Vityaz instructors. After preliminary physical-fitness and shooting tests, the main competition includes a 12-km cross-country run in full combat uniform, a 100m sprint, urban-assault exercises (including wall-climbing), acrobatics, and a 12-minute free-style sparring match with three opponents. Fewer than 10% of applicants pass the tests.