Special boat teams can trace their history back to World War II. Motor Torpedo Boat Squadron Three rescued General Douglas MacArthur (and later the Filipino president) from the Philippines after the Japanese invasion and then participated in guerilla actions until American resistance ended with the fall of Corregidor. PT boats subsequently participated in most of the campaigns in the Southwest Pacific by conducting and supporting joint/combined reconnaissance, blockade, sabotage, and raiding missions as well as attacking Japanese shore facilities, shipping, and combatants. PT boats were used in the European Theater beginning in April 1944 to support the Office of Strategic Services in the insertion of espionage and French Resistance personnel and for amphibious landing deception. While there is no direct line between organizations, NSW embracement is predicated on the similarity in craft and mission.[Clarification needed]

SWCC detachments have participated in nearly every major conflict since then, particularly in the Persian Gulf theatre during the 1987–1988 period of conflict and the 1991 Gulf War to the more recent War on Terrorism. In August 1996 while attached to USS Sides during counter drug operations in Colombia, SBS1 came under attack in the Antioquia Valley region while conducting field operations by members of FARC, Colombia's counter revolutionary movement. Six SBS1 members held off a force of approximately 150 rebels. The battle lasted for three days and nights and members of SBS1 found themselves surrounded and cut off from each other on several occasions. Short of ammunition and water, SBS1 held on until first light on day three, regrouped and counter-attacked, punching a hole in the FARC defense line and linking up with Colombian special forces sent there to assist them. An estimated 43 FARC rebels were killed during the battle and four were captured with only one team member being wounded. Members of the team were cited for their heroism and bravery. SWCC are now recognized as masters of a special subset of maritime special operations, and employ their specialized training, equipment, and tactics conducting missions worldwide, both independently and in support of US and foreign special operations forces (SOF).[citation needed]

The Global War on Terrorism was the impetus for several important changes in the NSW community. One of these many changes was the creation of a new SB rating system for SWCCs, which allows them to focus on their unique skill sets, to avoid limitations and constraints imposed by the old regime of "source ratings", to reach consensus and unity within the profession, and to allow them to enjoy advancement opportunities on par with the rest of the Navy.

Another important development was the recognition of the knowledge, skills, and training of SWCC crewmen as a warfare specialty, represented by the NEC 5352 and later denoted by the award of a military device or service badge.

To become a special warfare combatant-craft crewman, a service member must apply and be accepted to special programs, pass SWCC basic crewman training school, and pass other schools. Following this, they undergo crewman qualification training concurrently with a probationary period.

Only men are eligible to apply for the SWCC program. To qualify for SWCC training, one must:

Assignment to basic crewman training is conditional on passing the physical screening test, which requires the following minimal:

Instructors of crewman qualification training develop, train and qualify SWCC candidates in basic weapons, seamanship, first aid, and small unit tactics. This phase of training is twenty-one weeks in length. Physical training here is geared to prepare the student to meet the requirements of the operational special boat teams. CQT concentrates on teaching maritime navigation, communications, waterborne patrolling techniques, marksmanship and engineering, as well as close-quarters combat and SERE Level C. The student also receives an introduction to the NSW mission planning cycle, enabling him to participate in the planning, briefing, execution, and debriefing of an NSW mission from their tasking, to launch point, and on to their combat objective, where students apply all the techniques they have acquired during training.[6]

Due to the training and prerequisites involved in qualification, the SWCC is recognized by those within the broader realm of "small boat" outfits of the armed forces as a comparatively difficult qualification to obtain.

Due in part to the extremely difficult training and operating environment of SWCCs, they are qualified to operate jointly with other armed forces (particularly those within USSOCOM such as SEALs, Special Forces, MARSOC and AFSOC) operate in inclement weather and sea state, evade and fight on land as a contingency, and perform maritime special operations missions such as direct action, recon, ship boarding or vessel board, search and seizure, and sea-to-land support using a broad array of vessels and armaments.

SWCCs invariably receive broad individual and detachment in-house training and attend schools as needed. Before reporting to a team, all SWCCs must attend a 12-week language course, where they must learn a language assigned to them according to the needs of their respective teams. After reporting to the teams SWCCs may attend schools related to radio communications, weapons, maritime and land navigation, outboard, diesel, and waterjet engines, desert survival, jungle survival, air assault, special operations combat medic training, and many other DOD schools according to the needs of their respective team. SWCCs also receive extensive in-house training in these and other areas on an ongoing basis in order to keep skills fresh and synergies alive.

Combat first aid and lifesaving, emergency response, emergency life support, evaluation, water search and rescue, stabilization, packaging, transport, and MEDEVAC skills are of vital importance to all forces within the special operations community, since they operate far from medical assets and rely on their independent capabilities. SWCC platforms provide a unique opportunity to provide a "next layer" of pre-hospital medical stabilization and MEDEVAC capability between the field and helicopter/air transport. Inbound casualties are a likely scenario, and the nature of their missions places them at a high risk of casualty as well.

Because of this, all SWCCs receive ongoing and repeated in-house training in combat first aid, basic life support, airway management and oxygen administration, trauma care, limited emergency medication administration, and I.V. therapy – a set of skills roughly analogous to civilian BLS, BTLS, and EMT-B qualification, and thus quite arguably conferring on every SWCC the unofficial distinction of being a combat medic by the general definition. However, the SWCC community generally recognizes these members as "medic assistants" to distinguish them from the lead [para]medic, whose primary function as a professional paramedic is continually reinforced by years of training and experience. Every SWCC receives basic medic assistant training.

Some SWCCs have attended (and continue to attend) civilian EMT or paramedic courses (either funded or completed through their own ambition); and several of these men have enjoyed an ad-hoc, de facto status as "docs" serving in their detachments as medics in the past.

Within the NSW community, the title of SWCC detachment "medic" applies to SB (SWCC) members who have completed NSW combat medic course. This training is equivalent or exceeds civilian EMT-P certification, a civilian qualification which they are indeed eligible to test for immediately after training.

These men are among the rare exceptions to the general rule that "all Navy combat medics are hospital corpsmen". Because of changes leading to the establishment of the SB rating, non-corpsmen SWCCs attend the course,[7] become qualified NSW combat medics, and serve primarily as medics for the rest of their careers within Naval Special Warfare, in addition to performing the various other roles of a SWCC crewman.

Special warfare combat medics are the primary or lead combat medics in a SWCC detachment. Previously, SEAL corpsmen served as the lead medics in larger SWCC detachments and managed shoreside clinics at special boat teams, managing sick call, training all SWCCs as medic assistants, and rendering emergency medical care to both SWCCs and SEALs while deployed in the field. These SEALs contributed greatly to the special boat teams and the professional development of their SWCC combat medic counterparts. While readiness is still achieved by pooling of crew skills through medic assistant quals, SWCCs are now taking on lead medic roles within their community capitalizing on the benefit of a stable maritime platform, additional medical equipment, and the ability to provide longer-term stabilization of casualties on board their craft. 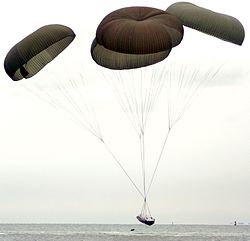 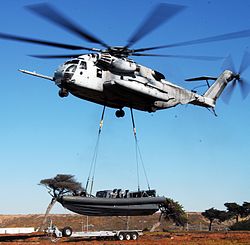 SWCC personnel are now more frequently trained as parajumpers with the development of the maritime craft aerial deployment system (MCADS).

Serving as a force multiplier, the MCADS capability enables naval special warfare sailors to rapidly deploy anywhere in the world in a maritime environment. The system deploys an 11-meter RIB (rigid inflatable boat) rigged with four large parachutes from the back of a C-130 or C-17 at approximately 3,500 feet. Approximately four SWCCs immediately follow the boat out of the plane and parachute to the immediate proximity of where the boat lands in the water. Within 20 minutes the SWCCs have the boat unpacked and rigged to get underway to deliver an element of SOF (special operations force) operators to any potential target of interest, or to conduct their own mission.

Special boat teams use the MEATS insertion and extraction delivery system. MEATS allows an Army CH-47D helicopter to hover over a craft used by SWCC to be rigged to the underbelly of the helo with slings. The combatant-craft crewman will then ascend a ladder dropped down from the helo into the craft. Once all the SWCC are on board, the CH47D will extract the craft from the water. A SWCC craft can also be inserted into a maritime environment giving the SWCC a longer range on land or at sea.

A variant of the MEATS insertion method was seen in the movies Act of Valor and Apocalypse Now.

The special warfare combatant-craft crewman insignia is a military qualification badge of the United States Navy which was first conceived in 1996, though the design was not approved for wear until 2001.