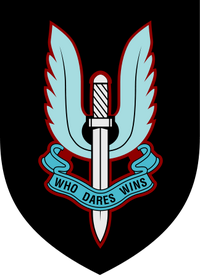 The Special Air Service (SAS) is one of the British Special Forces, known for its high capacity in extreme conditions. It is considered the first special force, the most respected in the world, and the creator of operations such as "Destroy and Escape."

The SAS is the mentor of several special forces of the world as: Delta Force,Sayeret Matkal,GSG-9,Special Air Service Regiment,KSK,GIGN,SSG and others.

SAS has a regular regiment, the 22nd Regiment, and the Regiments 21 and 23 of the territorial reserve force. The reserve regiments not only receive counter-terrorism training and more training is dragged. Generally act as "enemies" in training for conventional forces

It was created in 1941 during WWII in North Africa by a lieutenant named Scottish David Stirling. The unit was named SAS - Special Air Service, to think that the Germans had commandos paratroops serving British Army at Cairo.

His initial concept projected a mobile offensive force reduced in size, it would fight behind enemy lines, with a strategic objective, and other side, attacking any target of opportunity, an autonomous until extraction could be by any means.

In the African campaign was a great performance, and he also fought in Italy and Europe. SAS destroyed over 400 aircraft Luftwaffe; Believe they had a better performance than the RAF (Royal Air Force) destroyed in ground and air. After the Second World War has been deactivated and was reactivated in 1950 with the name 22nd Special Air Service. It was decided that Royal Marines and the Boats Special Service would make short-range incursions and raids SAS long-range and long-term within a strategy against Soviet Union. Since then he has fought for Great Britain in many different places as in Malaysia, Oman, Borneo, Vietnam - Wearing American uniforms - Aden, Northern Ireland, Malvinas, Liberia, Persian Gulf, Bosnia, Kosovo, Sierra Leone and Afghanistan., Which reaffirmed its reputation for Invincible.

SAS in its entire history reveals many facets and large capacity in various situations from assaults jungle, Fighting in desert and actions antiterrorism (Tactics Fighting in Confined Environments). Their motto seems to provocative "Who dares Wins"Which means" Who dares wins. "

In many of the Special Operations Forces in the world were heavily influenced by British SAS, the example we have: Delta Force, Seals DEVGRU Team Sayeret Matkal, SASR, GOE Portuguese police,ROTA brazilian, and many other Special Operations units / Anti-terrorist Teams.

One of the major characteristics of this unit is its adaptability for being a pioneer among Special Forces. A "primer" SAS is currently used by almost all commands and special forces in the world. Among the innovations that are created:

The Special Air Service has developed and perfected many techniques that today are quite traditional by the urban task forces.

Special forces based on the SAS

The Regiment participated and gave rise to many other Special Forces around the world, including: