lit, "ground army") is the terrestrial army of the Spanish Armed Forces responsible for land-based military operations. It is one of the oldest active armies - dating back to the 15th century.

The Spanish army has existed continuously since the reign of King Ferdinand and Queen Isabella (late 15th century). The oldest and largest of the three services, its mission was the defense of peninsular Spain, the Balearic Islands, the Canary Islands, Melilla, Ceuta and the Spanish islands and rocks off the northern coast of Africa.

The army is completing a major reorganization. It had previously been organized into nine regional operational commands. These were reduced to six commands in conjunction with a revised deployment of forces: Central Command, Southern Command, Levante Command, Eastern Pyrenees Command, Northwestern Command, and Western Pyrenees Command. In addition there were the two military zones of the Canary Islands and the Balearic Islands. Ceuta and Melilla fell within the Southern Command. At the head of each regional and zonal command was an officer of three-star rank. Although his authority had been reduced, the regional commander, who held the title of captain general (Spanish: Capitán General), was still among the most senior officers of the army.

Under its earlier organization, the army was grouped into two basic categories: the Immediate Intervention Forces and the Territorial Operational Defence Forces. In theory, the former, consisting of three divisions and ten brigades, had the missions of defending the Pyrenean and the Gibraltar frontiers and of fulfilling Spain's security commitments abroad. The latter force, consisting of two mountain divisions and fourteen brigades, had the missions of maintaining security in the regional commands and of reinforcing the Civil Guard (Spanish: Guardia Civil) and the police against subversion and terrorism. In reality, most of the Immediate Intervention Forces were not positioned to carry out their ostensible mission of protecting the nation's borders. Many units were stationed near major cities—as a matter of convenience for officers who held part-time jobs—from which they also could be called upon to curb disturbances or unrest.

In a gradual process that had not been fully completed, the division of the army into the Immediate Intervention Forces and the Territorial Operational Defence Forces was being abolished. The brigade had become the fundamental tactical unit. The total number of brigades had been reduced from twenty-four to fifteen by the dismantling of nine territorial defence brigades. Eleven of the brigades had been organized within the existing five divisions; three brigades were to be independent, and one was to be in general reserve.

The best equipped of the five was the First Division, the Brunete Armored Division, with its armored brigade in the Madrid area and its mechanized brigade farther to the southwest near Badajoz. The motorized Second Division, Guzman el Bueno Division, which had acquired a third brigade as a result of the reorganization, was the major defensive force in the south, with full capability for rapid maneuver. The mechanized Third Division, the Maestrazgo Division, under the Levante Command, consisted of two brigades considered to have a moderate degree of mobility. The two mountain divisions, the Fourth Division—or Urgel Division and the Fifth Division—or Navarra Division, each consisting of two mountain brigades, remained in the Pyrenees border area of the north. Two of the four independent brigades were armored cavalry, one was an airborne brigade, and one was a paratroop brigade (in general reserve).

The personnel strength of the army, which previously had been maintained at about 280,000, including 170,000 conscripts, had been trimmed to 240,000 by 1987. This was achieved through lower intakes of conscripts and volunteers and through cuts in the table of organization for officers and NCOs. The government's goal was a smaller but more capable army of 195,000 effective by 1991. Outside peninsular Spain, about 19,000 troops were stationed in Ceuta and Melilla. These included, in addition to the Spanish Legion and other specialized units, four regular regiments of North Africans. An additional 5,800 troops were assigned to the Balearic Islands, and 10,000 were in the Canary Islands.

The Spanish Legion, founded in Spanish Morocco in 1920, has always been under the direct command of the chief of the army staff. It has had a reputation as the toughest combat unit in the service, although modelled after the French Foreign Legion, reduced in size in 1987, as a result of successive reorganizations, the legion was scheduled to undergo further cuts to an overall strength of 6,500. It had a higher number of career soldiers than other units, but it was manned mostly by conscripts who had volunteered for the legion. Recruitment of non-Spanish personnel, who had never exceeded 10 percent of the group's manpower, ended in 1986. Foreign legionnaires already in the service were not affected.

The Spanish Legion is grouped into four tercios (sing., tercio), a unit intermediate between a regiment and a brigade, each commanded by a colonel. The first and the second tercios constituted the core of the military garrisons at Melilla and Ceuta (North Africa). Each had been reduced by a motorized battalion, leaving it with a single motorized battalion, a mechanized battalion, an antitank company, and a headquarters company. They were equipped with BMR armored personnel carriers. The Third Tercio, stationed in the Canary Islands, consisted of two motorized battalions and a headquarters company. The Fourth Tercio was being converted from a support role to a combat unit at the legion headquarters in Ronda near Malaga. Although, probably not as "glamorous" outside Spain as their French counterparts, the Spanish legion is as professional and fierce as any other elite force in the world.

The Ministry of Defence was planning the creation of a rapid deployment force composed entirely of volunteers. This force, which would include the Spanish Legion, the Paratrooper Brigade, the Airborne Brigade, and Marine units, would be available for use in trouble spots on twelve hours' notice. Lack of adequate air and naval transport would, however, be a limiting factor.

In spite of new procurement programs, introduced in the mid-1980s, weapons and equipment were not in sufficient supply, and they were not up to the standards of other NATO armies. The inventory of medium tanks was made up of nearly 700 American models, as well as about 300 Franco-Spanish AMX-30s manufactured in Spain between 1974 and 1983. Although the military felt that it was essential to adopt a new main battle tank for the 1990s, some considerations led to a postponement of the decision and the upgrading of the AMX-30s with new German-designed diesel engines and transmissions, reactive armor panels, and laser fire-control systems.

Armored troop carriers included about 1,200 M-113s as well as AML-60s and AML-90s and Pizarro infantry fighting vehicles. The Spanish army is in the process of being equipped with more than 1,200 BMRs, a new armored vehicle designed and manufactured in Spain. A variety of towed and self-propelled artillery guns was available, ranging from 105 mm to 203 mm guns and howitzers. The main antitank weapons were recoilless rifles; 88.9 mm rocket launchers; Milan, Cobra, and Dragon missiles; and a small number of TOW (tube-launched, optically tracked, wireguided) and HOT (high subsonic, optically guided, tube-launched) antitank missile systems. A considerable quantity of additional antitank missiles and rocket launchers was on order. The army aircraft inventory included about 280 helicopters, about 40 of which were armed with 20 mm guns or HOT antitank missiles.

In this year the Spanish army began a reorganization that included a reduction by 45,000 men. It had, at the time, one armoured division (2 active armoured brigades and one reserve), one mechanized division, one motorized division, and five separate brigades (one each: airborne, armored, air-assault, infantry, heavy artillery). These units, together with some separate regiments, were in the active component of the army (Field Army or FII).

In the Territorial Army (reserve forces, known in Spanish as FDOT) there were:

Weapons were (SP means Self Propelled):

At that time there was a plan called META, in Spanish Modernization of Army, that was discussed between 1982 and 1988. Military regions were reduced from 9 to 6, FII and DOT (Field Army and Territorial Army) were united and the brigades were reduced from 24 to 15. Men were recently reduced from 279,000 to 230,000.

Five divisions, with 11 brigades, were organized as:

Three separate brigades were: the Jarama air-assault Brigade, the Castillejos armoured brigades, and the BRIPAC airborne brigade, this latter within the General Reserve. Minor units comprised 14,000 men on the Canary Is., 9,000 on the Balearic Is. and 7,000 in Ceuta and Melilla. Six groups and three companies were devoted to special operations (GOE and COE). Standard divisional structure was:

Brigades were organized with a 3-5000 strength, 3 or 4 battalions, one artillery group and support units.

AMX-30E were built under license by Empresa Nacional Santa Barbara between 1974 and 1983. They were the mainstay of the army, and although new, they performed below expectations because of transmission problems. 150 were planned to be upgraded to AMX-30E2 with enhanced protection (with ERA bricks), fire-control systems (based on laser and ballistic computers) and improvements in mobility. Total cost was budgeted at 30 billion (30,000,000,000) pesetas. Over 80% of this bill was allocated to replacement of Hispano-Suiza HA-110 engines and mechanical transmissions, the same as with Leopard 1 (MTU 833, 840 hp) and ZF LSG-3000 automatic transmissions. FCS is Hughes Mk 9, while ERA is the Israeli-made Blazer.

M-47 E1 and E2 had diesel powerplants instead of original gasoline engines, M-47 E2 and M-48 A5E1 had 105 mm guns, with the latter a computerized FCS Hughes Mk 7. Advanced night-vision sistems were also in program. To replace many of these tanks there was a program for 272 M60A1 and 260 M60A3 ex-US Army main battle tanks. This meant that all M-47 and M-48 will been phased out and sent to Pakistan and Bolivia.

Cavalry had at the time 13 regiments (infantry had around 40), 7 light (RCLAC), 4 armoured (RCAC) and one school. They had several units: 1 with M113 and one tank squadron with 30 vehicles (13 tanks and 17 M113 basic or with 120 mm SP mortar). BMR VEC were the mainstay of cavalry squadrons (three for each regiment). These 6x6 armoured were built in Spain, had OTO-Melara turrets and different weapons: 20 had the relatively weak 20 mm Rh-202, while 70 had Cockerill 90 mm gun, far powerful also for anti-tank actions. But the majority had M-242 Bushmaster gun, the same as the M2 Bradley (Without DU ammunition), for a total of 208 out 298. M242 have range and power to threat many tanks and all light AFV with APDS ammunition. Other valuable machines were 1,200 M113, included special versions like 81 and 120 mortar-carriers.

The six regiments of MAAA had 12 groups. Six had Bofors guns, 3 had Oerlikon 35 mm, 1 HAWK and NIKE-HERCULES, 1 Roland, and 1 with TOLEDO, a combination of 35/90 mm gun and ASPIDE missiles.

All the units had:

In 2001, when compulsory military service was still in effect, the army was about 135,000 troops (50,000 officers and 86,000 soldiers). Following the suspension of conscription the Spanish Army became a fully professionalized volunteer force and by 2008 had a personnel strength of 61,300.[3] In case of a wartime emergency, an additional force of 80,000 Civil Guards comes under the Ministry of Defence command. Recent defense reforms will see the number of soldiers in the Spanish Army fall significantly.[4]

The military ranks of the Spanish army are as follows below. For a comparison with other NATO ranks see Ranks and Insignia of NATO. Ranks are wore on the cuff, sleeves and shoulders of all army uniforms, but differ by the type of the uniform being used.

Ranks of non-commissioned officers and enlisted 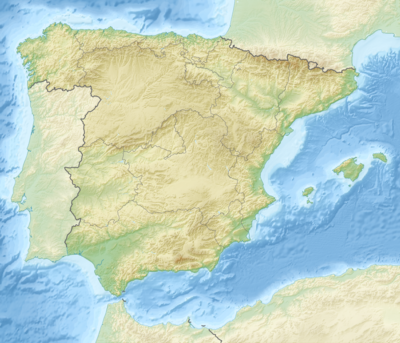 Note that Bandera (Flags) are the names of the battalions of the Spanish Legion and the Parachute Infantry Brigade and the old term of Tercio is used to identify Spanish Legion regiments.

Support units of the land forces

Other Units of the Land Forces: