View source
This article is about the 1967–1990 state. For the 1994 breakaway unrecognized state, see Democratic Republic of Yemen.

The People's Democratic Republic of Yemen (Arabic: جمهورية اليَمَنْ الديمُقراطية الشَعْبِيّة Jumhūrīyat Al-Yaman Al-Dīmuqrāṭīyah Al-Sha'bīyah), also referred to as South Yemen, Democratic Yemen or Yemen (Aden), was a socialist state in the southern and eastern provinces of the present-day Republic of Yemen, including the island of Socotra. It united with the Yemen Arab Republic (commonly known as "North Yemen") on May 22, 1990, to form the present-day Yemen. After four years, however, South Yemen declared its secession from the north, which resulted in the north occupying south Yemen and the 1994 civil war.

In 1838, Sultan Muhsin bin Fadl of the nearby state of Lahej ceded 194 km² (75 sq. miles) including Aden to the British. On 19 January 1839, the British East India Company landed Royal Marines at Aden to occupy the territory and stop attacks by pirates against British shipping to India. It then became an important trading hub between British India and the Red Sea, and following the opening of the Suez canal in 1869, it became a coaling station for ships en route to India. Aden was ruled as part of British India until 1937, when the city of Aden became the Colony of Aden. The Aden hinterland and Hadhramaut to the east formed the remainder of what would become South Yemen and was not administered directly by Aden but were tied to Britain by treaties of protection with local rulers of traditional polities that, together, became known as the Aden Protectorate. Economic development was largely centred in Aden, and while the city flourished, the states of the Aden Protectorate stagnated.

In 1963, Aden and much of the Protectorate were joined to form the Federation of South Arabia with the remaining states that declined to join, mainly in Hadhramaut, forming the separate Protectorate of South Arabia. Both of these polities were still tied to Britain with promises of total independence in 1968. Two nationalist groups, the Front for the Liberation of Occupied South Yemen (FLOSY) and the National Liberation Front (NLF), began an armed struggle (Aden Emergency) on 14 October 1963 against British control and, with the temporary closure of the Suez Canal in 1967, the British began to withdraw. One faction, NLF, was invited to the Geneva Talks to sign the independence agreement with the British. Ironically, Britain, who during its occupation of Aden signed several treaties of protection with the local sheikhdoms and emirates of the Federation of South Arabia, excluded them in the talks and thus the agreement stated "...the handover of the territory of South Arabia to the (Yemeni) NLF...". Southern Yemen became independent as the People's Republic of South Yemen on 30 November 1967, and the National Liberation Front consolidated its control in the country.

In June 1969, a radical Marxist wing of the NLF gained power and on 1 December 1970, reorganized the country into the People's Democratic Republic of Yemen. Subsequently, all political parties were amalgamated into the National Liberation Front, renamed the Yemeni Socialist Party, which became the only legal party. The People's Democratic Republic of Yemen established close ties with the Soviet Union, the People's Republic of China, Cuba, East Germany, and the Palestinian Liberation Organization.

The major communist powers assisted in the building of the PDRY's armed forces. Strong support from Moscow resulted in Soviet naval forces gaining access to naval facilities in South Yemen.

Unlike the early decades of East Germany and West Germany, North Korea and South Korea, or North Vietnam and South Vietnam, the northern Yemen Arab Republic (YAR) and the PDRY remained relatively friendly, though relations were often strained. Fighting broke out in 1972, and the short-lived, small proxy border conflict was resolved with negotiations, where it was declared unification would eventually occur.[1][2]

However, these plans were put on hold in 1979, as the PDRY funded Red rebels in the YAR, and war was only prevented by an Arab League intervention. The goal of unity was reaffirmed by the northern and southern heads of state during a summit meeting in Kuwait in March 1979.

In 1980, PDRY president Abdul Fattah Ismail resigned and went into exile in Moscow, having lost the confidence of his sponsors in the USSR.[3] His successor, Ali Nasir Muhammad, took a less interventionist stance toward both North Yemen and neighbouring Oman.

On January 13, 1986, a violent struggle began in Aden between Ali Nasir's supporters and supporters of the returned Ismail, who wanted power back. Fighting, known as the South Yemen Civil War, lasted for more than a month and resulted in thousands of casualties, Ali Nasir's , and Ismail's death. Some 60,000 people, including the deposed Ali Nasir, fled to the YAR. Ali Salim al-Beidh, an ally of Ismail who had succeeded in escaping the attack on pro-Ismail members of the Politburo, then became General Secretary of the Yemeni Socialist Party.[4]

Reforms and attempts for unification

Against the background of the Perestroika in the USSR, Yemen's main backer, South Yemen started political reforms in the late 1980s. Political prisoners were released, political parties were formed and the justice was reckoned to be more equitable than in the North. In May 1988, the YAR and PDRY governments came to an understanding that considerably reduced tensions including agreement to renew discussions concerning unification, to establish a joint oil exploration area along their undefined border, to demilitarize the border, and to allow Yemenis unrestricted border passage on the basis of only a national identification card. In 1990, the parties reached a full agreement on joint governing of Yemen, and the countries were effectively merged as Yemen.

Ethnic groups: Arab 92.8%, Somali 3.7%, Black 1.1%, Indo-Pakistani 1%, other 1.4% (2000) The only recognized political party in South Yemen was the Yemeni Socialist Party, which ran the country and the economy along lines they described as Marxist, modeled on the Soviet Union.[citation needed]

The Supreme People's Council was appointed by the general command of the National Liberation Front in 1971.

In Aden, there was a structured judicial system, with a supreme court.

Education was paid for through general taxation.

There was no housing crisis in South Yemen. Surplus housing built by the British meant that there were few homeless people in Aden, and people built their own houses out of adobe and mud in the rural areas.

In 1976, the South Yemen national football team participated in the Asia Cup, where the team lost to Iraq 1-0, and Iran 8-0. They entered their only World Cup qualification campaign, for the 1986 FIFA World Cup, and were knocked out in the first round by Bahrain. South Yemen played their first international against the United Arab Republic on 2 September 1965 where they lost 14-0. Their last international match played was against Guinea on 5 November 1989 where they lost 1-0. The team stopped playing when the North and South united in 1990 to form the modern state of Yemen.

Finally in 1988, the South Yemen Olympic team made its debut in Seoul. Sending only eight athletes, the country won no medals. This was the only time the country went to the Olympics until unification in 1990. 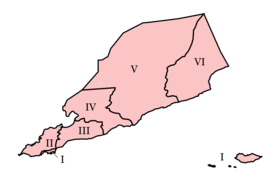 Following independence, South Yemen was divided into six governorates (Arabic sg. muhafazah), with roughly natural boundaries, each given a name by numeral. From 1967 to 1978 they were named officially by numerals only, from 1979 to 1990 - by new official names. The islands: Kamaran (until 1972, when it was seized by North Yemen), Perim (Meyun), Socotra, Abd-el-Kuri, Samha (inhabited), Darsah and others uninhabited from the Socotra archipelago were district (mudiriyah) of the First/Aden Governorate being under Prime-Minister of the state supervision.[5]

There was little industrial output, or mineral wealth exploitation, in South Yemen, until the mid-1980s, following the discovery of significant petroleum reserves in the central regions near Shibam and Mukalla. The main sources of income were agriculture, mostly fruit, cereal crops, cattle and sheep, fishing and later, oil exports.

The following airlines had operated from the PDRY:[6]