Sonderkommandos were work units of Nazi death camp prisoners, composed almost entirely of Jews, who were forced, on threat of their own deaths, to aid with the disposal of gas chamber victims during The Holocaust. The death-camp Sonderkommando, who were always inmates, should not be confused with the SS-Sonderkommandos which were ad hoc units formed from various SS offices between 1938 through 1945.

The term itself in German means "special unit", and was part of the vague and euphemistic language which the Nazis used to refer to aspects of the Final Solution (cf. Einsatzgruppen).

Sonderkommando members did not participate directly in killing; that responsibility was reserved for the guards, while the Sonderkommandos' primary responsibility was disposing of the corpses. They were forced into the position; in most cases they were inducted immediately upon arrival at the camp, and were not given any advance notice of the tasks they would have to perform. They had no way to refuse or resign other than by committing suicide. Because the Germans needed the Sonderkommandos to remain physically able, they were granted much less squalid living conditions than other inmates: they slept in their own barracks, which more than any other in the camp resembled normal human dwellings; they were allowed to keep and use various goods such as food, medicines and cigarettes brought by those who were sent to the gas chambers; and, unlike ordinary inmates, they were not subject to arbitrary, random killing by guards. As a result, Sonderkommando members tended to survive longer than other inmates of the death camps — but few survived the war.

There was a revolt by Sonderkommandos at Auschwitz in which one of the crematoria was partly destroyed. For months, young Jewish women, like Ester Wajcblum, Ala Gertner, and Regina Safirsztain, had been smuggling small amounts of gunpowder from the Weichsel-Union-Metallwerke, a munitions factory within the Auschwitz complex, to men and women in the camp's resistance movement, like Roza Robota, a young Jewish woman who worked in the clothing detail at Birkenau. Under constant guard, the women in the factory took small amounts of the gunpowder, wrapped it in bits of cloth or paper, hid it on their bodies, and then passed it along the smuggling chain. Once she received the gunpowder, Robota passed it to her co-conspirators in the Sonderkommando. Using this gunpowder, the leaders of the Sonderkommando planned to destroy the gas chambers and crematoria, and launch the uprising.[2] When the camp resistance warned the Sonderkommando that they were due to be murdered on the morning of 7 October 1944, the Sonderkommando attacked the SS and Kapos with two machine guns, axes, knives and grenades. Over 70 SS men were killed, including two who were pushed alive into a crematorium oven after being stabbed by a member of the Sonderkommando. Some of the Sonderkommando escaped from the camp for a period, as was planned, however they were recaptured later the same day.[1] Of those who didn't die in the uprising itself, 200 were later forced to strip, lie face down, and then were shot in the back of the head. A total of 451 Sonderkommandos were killed on this day.[3][4][5]

There was also an uprising in Treblinka on 2 August 1943, in which around 100 prisoners succeeded in breaking out of the camp,[6] and a similar uprising in Sobibor on 14 October 1943.[7] The uprising in Sobibor was dramatized in the film, Escape from Sobibor. The Sonderkommando in Sobibor's Camp III did not take part in the uprising in Camp I, but were murdered the following day. Sobibor and Treblinka were closed shortly afterwards. Fewer than twenty out of several thousand members of the special squads are documented to have survived until liberation and were able to testify to the events (although some sources claim more[8]), among them: Henryk (Tauber) Fuchsbrunner, Filip Müller, Daniel Behnnamias, Dario Gabbai, Morris Venezia, Shlomo Venezia, Alter Fajnzylberg, Abram Dragon, David Olère, Henryk Mandelbaum, Martin Gray. There have been at most another six or seven confirmed to have survived, but who have not given witness (or at least, such testimony is not documented). Buried and hidden accounts by members of the Sonderkommando were also later found at some camps.

In the collection at Yad Vashem, the Holocaust museum in Jerusalem, Israel, there are notes from members of Sonderkommandos. The following note was found buried in the Auschwitz crematoria and was written by Zalman Gradowski, a member of the Sonderkommandos who was killed in 7 October 1944 revolt:

"Dear finder of these notes, I have one request of you, which is, in fact, the practical objective for my writing ... that my days of Hell, that my hopeless tomorrow will find a purpose in the future. I am transmitting only a part of what happened in the Birkenau-Auschwitz Hell. You will realize what reality looked like ... From all this you will have a picture of how our people perished."[9] 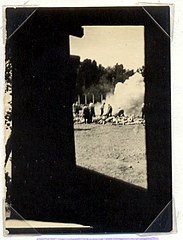 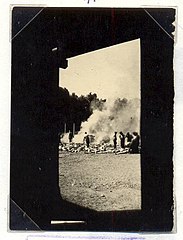 Close-ups of subject area (from above) 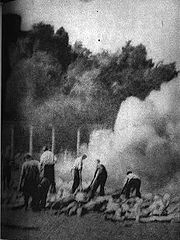 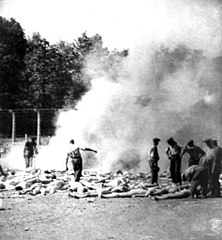 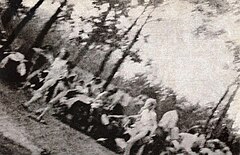 Sonderkommando in Auschwitz-Birkenau,
August 1944. The march to "showers"

There are several eyewitness accounts from members of the Sonderkommando. Publications include: