View source
watch 01:25
Jurassic World: Dominion Dominates Fandom Wikis - The Loop
Do you like this video?
Play Sound
Not to be confused with [[:{{{1}}}]].

Sonderführer[lower-alpha 1] (German: [ˈzɔndɐˌfyːʁɐ], Template:Lit. "special leader"), abbreviated Sdf or Sf, was a specialist role introduced in the Wehrmacht of Nazi Germany in 1937 for the mobilization of the German armed forces.[1]

With the draft of Sonderführer to military service, the competence of civil experts and specialists could be exploited for military purposes. Certain assignments could be filled, from senior officers, company-grade officers, down to non-commissioned officer (NCO) ranks. A huge variation of service functions, e.g. in foreign languages, propaganda work, medical service, veterinary service and the like, was possible. Typically, the men were not trained as soldiers. They received the pay applicable to the position they were holding, but only by virtue of their temporary appointment. As a rule, Sonderführer were not allowed to execute the command and disciplinary powers vested in the rank. However, this was changed in 1942, during World War II.

Draftees were called up for Sonderführer to almost all branches of service (Heer, Luftwaffe and Kriegsmarine) or special forces, equivalent to assignments or appointment of military personnel in the hierarchy of the Wehrmacht.

Officer function assignments in the hierarchy of the Heer (Army)

NCO function assignments in the hierarchy of the Heer (Army)

In case of professional expertise as photograph or draughtsman, the appropriate draftee could be called up for Sonderführer to a so-called Propaganda unit of the Wehrmacht.

An example of individual influence in the occupied territory, in this situation to the language, is the case of Sonderführer Leo Weisgerber. He initiated a campaign to unify the Breton language: language. Up to the present time there are after-effects to this in the French region Brittany[2]

Sonderführer were called up to military service to use the skills and expertise of specialists on defined function positions. This status was limited as to time, and became revocable if a military trained soldier could fill this position. In this case, the Sonderführer was fit into the "regular" military training procedure etc. The former function position as Sonderführer – which contained a service "assignment" not including a service "grade" – remained without consideration.

By order in 1942 – Sonderführer on officer assignments received regular military training, in order to join the reserve officer corps. Therefore, the limitations to execute military command – and disciplinary powers were lifted.[3]

The legal state of the Sonderführer was equivalent to those of a soldier in the meaning of the Nazi Service Act Legislation. Therefore, his status as combatant derives. In the pension legislation of the Federal Republic of Germany Sonderführers are explicit equivalent to regular soldiers.[4]

Russian emigrants, which served as interpreters in the Wehrmacht, often were adjudged to Sonderführer status.[5]

Sonderführer of the Wehrmacht wore the standard military uniform but their collars and cap bands were blue-grey rather than army green, with unique shoulder and collar insignia. The collar patch was blue-grey with a gable-end device like that of Beamter a. K. in matte aluminium, with aluminium braid down the center. Epaulette patterns changed twice during the war. The original patterns, worn until March 1940 and again after December 1942, were narrow versions of army shoulder boards: a single doubled strip of aluminium braid for company-grade officer equivalents, and a single braided strip for field-officer equivalents; NCO equivalents were similar to junior officers' but green. Instead of rank pips, Sonderführer wore braided gold rings encircling the shoulder straps. From 1940 to 1942 an entirely different type of shoulder board was worn: this was like the army equivalent but the braid used incorporated repeating black-white-red chevrons, giving the whole a checkered look. Ordinary rank pips and specialization pins were worn with these "Second Regulation" epaulets. At the end of 1942 the narrow first-pattern epaulettes were brought back again.

In soldier's slang Sonderführers, as well as Wehrmacht officials and military chaplains, were called "narrow-gauge officers" (German language: Schmalspuroffiziere), in a witty reference both to the form of their rank insignia and the limited width of their military knowledge. 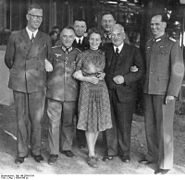 The OKW Radio service in 1939. On the far right a Sonderführer.

In the center a Sonderführer (O) as interpreter, France.

The designation SS-Sonderführer had a different meaning in comparison to the Sonderführer in the Wehrmacht. Therefore, SS-Sonderführer should be seen in conjunction with the service rank order of the Schutzstaffel.

Fundamental, it was possible to add any use any SS-rank in conjunction with a SS-Sonderführer assignment to any existing SS-service rank. The normal procedure was to call up SS-Sonderführer from own SS-staff.

Sonderführer were used not only in Wehrmacht and Waffen-SS, but also in other Nazi-organisation, e.g. in the Organisation Todt, Reichsarbeitsdienst, etc.

Some notable personnel of this rank include: