The SOKO G-2 Galeb (English: Seagull) is a single engine, two-seater advanced jet trainer and light ground-attack aircraft that was designed by ATI and manufactured by SOKO of Yugoslavia. G-2 Galeb was the first jet aircraft serial manufactured in Yugoslavia and the Balkans.

The G-2 Galeb was developed as a replacement for the Lockheed T-33 Shooting Star, which had been the most commonly used jet trainer aircraft of the Yugoslav Air Force up until 1967. Yugoslavia's VTI (Aeronautical Technical Institute) began design work on the airplane, named Galeb, in 1957. The Galeb features a straight wing with tip tanks, Folland Type 1-B lightweight ejector seats, sideways hinging canopy transparencies and under-wing hard points for light bombs and rockets. The first flight of the prototype, Galeb 1, was performed by test pilot captain Ljubomir Zekavica on 3 July 1961. Galeb 1 had three rubber tanks in the fuselage, while Galeb 2 had two fuselage tanks holding 230 gallons (US) and two wingtip tanks holding 51 gallons (US) each. Soon, after a full-size wooden mock-up, the second prototype Galeb 2 was built - establishing the G-2 type designation.

During flight tests, a maximum speed of 812 km/h (440 kt) at 6,200 m (20,100 ft) was achieved in clean configuration, with no paint and a polished airframe. Top diving speed was Mach 0.81, obtained after a prolonged dive. Without a pressurized cabin the practical ceiling is between 7,000 (22,800 ft) and 9,000 m (29,000 ft). A pressurized cabin would have increased costs by up to 15% because all components needed to be imported. The Air Force needed a trainer with secondary combat ability that could operate from unprepared runways. Not familiar with such requirements, the designers provided for landing gear strong enough to make the aircraft suitable for landing on aircraft carriers.

The need for a safe training aircraft that is forgiving on landings meant that the wheels retract into the wings instead of the fuselage, making for a heavier, straight wing, which is less likely to stall on landing, but precludes supersonic flight. It was flown primarily by the Air Academy of Yugoslavia. Production ceased in 1985.

Production began in 1964, making it the first indigenous jet to enter mass production in Yugoslavia (the first jet-powered plane built by Yugoslavia was the Ikarus 451M in 1952, which did not enter production). After the Soko 522, it was the second aircraft built at SOKO. The first production series G-2A was entered in the aircraft register of the Yugoslav Air Force on 30 July 1965, and the last one on 6 January 1981. The G-2A was known in Yugoslav military under the N-60 designation. Production of updated aircraft for export to Libya was extended until mid-1983. Soko produced a total of 248 Galeb aircraft, 132 of which were used by the Yugoslav Air Force.

Powered by a license-built Rolls Royce Viper Mk 22-6 turbojet, the G2-A was the standard version for the Yugoslav Air Force. They were used primarily for school-combat training of VVA (Military Air Force Academy) cadets, so that the largest number of these aircraft was located in the VVA units. The aircraft was very easy and forgiving in flight, with easy maintenance, so students and technicians loved it.[citation needed] They regularly achieved 5,000 hours in the air (the G-2 Galeb in the Yugoslav Aeronautical Museum had 6,200 hours in its logbook).[2] A G2-AE export variant became available from late 1974 and was built for Libya and Zambia.

The G-2A was used extensively by the 105th Fighter-Bomber Regiment of the Yugoslav Air Force, in combat over Bosnia-Herzegovina.

According to some reports, France and Yugoslavia supported Mobutu's government during the First Congo War. Namely, Yugoslavia agreed to deliver three J-21 and one G-2 aircraft, as well as four MiG-21PFMs, while three Mi-24s were purchased from Ukraine. All these aircraft were based at Gbadolite and flown mainly by Serbian mercenaries.

With few exceptions it remains unknown exactly what happened with each of these aircraft and how were they used after their arrival in Zaire, in late 1996-1997. In the case of Mi-24s it is known that one hit a power line and crashed on 27 March 1997, killing the three crewmen and four passengers. The fate of at least one J-21 Jastreb was not much better: one of the Serbian mercenaries, called Ratko Turčinović, was killed while flying an ultra-low-level pass over Gbadolite and clipping a lamp post with his wing. The wreckage of his aircraft fell directly into a column of young soldiers on a parade, killing dozens of them. Turčinović apparently fell victim to a massive alcohol problem.[3]

After this event, the Serbs were expelled and the Jastrebs and Galebs were abandoned along with the MiG-21s and two Mi-24s which were meant to be put together by group of Russian or Ukrainian technicians at Gbadolite but the assembly work was never completed.[4][5][6][7][8][9][10]

Colonel Gaddafi's forces used the type to attack rebel forces during the 2011 Libyan civil war. One was destroyed after landing on 24 March 2011 by a French Dassault Rafale after violating the No-Fly-Zone over Misrata.[11] Another five together with 2 Mi-35 helicopters were reported destroyed by the French Air Force in the same area the following day, but satellite images showed that the five fixed wing aircraft were MiG-23s.[12][13]

Before the Yugoslav Wars, at least a dozen Galebs were purchased by American warbird dealers, and several are still on the civil register today.[14] Other operators are located in Indonesia, Serbia, New Zealand, Slovenia and the United States. 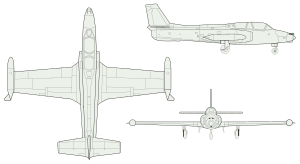