The Sikorsky SH-3 Sea King (company designation S-61) is an American twin-engined anti-submarine warfare (ASW) helicopter designed and built by Sikorsky Aircraft. It was a landmark design, being the first ASW helicopter to take advantage of turboshaft engines, as well as being the first amphibious helicopter in the world.[2] Introduced in 1961, it served with the United States Navy, and remains in service in many countries around the world. The Sea King has been built under license in Italy and Japan, and in the United Kingdom as the Westland Sea King. The major civil versions are the S-61L and S-61N.

As the Cold War between the US and the Soviet Union developed, the Soviet Navy had elected to construct a large fleet of over 200 submarines, the US Navy chose to counter this threat by investing in newer and increasingly capable ASW technologies and platforms such as the Sea King.[3] In 1957, Sikorsky was awarded a contract to develop an all-weather amphibious helicopter for the U.S. Navy. The new helicopter would excel at anti-submarine warfare (ASW) and would combine the roles of hunter and killer, previously these had to be performed by two separate helicopters.[4] The key features of the emerging ASW helicopter would include its amphibious hull for landing on the water, and its twin-turboshaft engines that enabled a larger, heavier and better-equipped aircraft than prior helicopters.[4][5]

The first prototype took flight for the first time in March 1959.[4] Carrier suitability trials were conducted on board the USS Lake Champlain; the trials were completed successfully in mid-1961.[6] Production deliveries of the HSS-2 (later designated SH-3A) to the US Navy began in September 1961, these initial production aircraft were each powered by a pair of General Electric T58 turboshaft engines.[7]

Sikorsky also developed a variant of the Sea King for the civil market, designated Sikorsky S-61L. The first operator of the S-61L was Los Angeles Airways, who introduced them to service on 11 March 1962.[8][9] Another variant with a conventional hull, the Sikorsky S-61R, was also concurrently developed for transport and search and rescue (SAR) duties, this type was extensively operated by the U.S. Air Force and the U.S. Coast Guard.[10] In late 1961 and early 1962, a modified U.S. Navy HSS-2 Sea King was used to break the FAI 3 km, 100 km, 500 km and 1000 km helicopter speed records. This series of flights culminated on 5 February 1962 with the HSS-2 setting an absolute helicopter speed record of 210.6 mph.[11] This record was broken by a modified Sud Super Frelon helicopter on 23 July 1963 with a speed of 217.7 mph.[12]

In the early 21st century, following their drawdown in US service, there has been multiple initiatives to refurbish ex-military Sea Kings for continued operations; in addition to civil operators, nations such as Egypt and India acquired refurbished Sea Kings to supplement their own aging fleets.[13][14][15] While Sikorsky formally ended production of the helicopter model in the 1970s, in 2009, it was reported that nearly 600 Sea Kings were in operational service.[16]

When introduced, the Sea King was a considerable advancement over previous helicopters; its twin-turboshaft powerplant layout gave the SH-3 a payload capacity and level of reliability far in excess of previous anti-submarine helicopters.[4] In the event of an engine failure, the Sea King can maintain flight on a single engine alone.[17] Sea Kings operating in an anti-submarine capacity typically had a four man crew; a pilot and copilot in the cockpit and two aircrew in the cabin area to operate and monitor the aircraft's detection equipment and to interpret the sensor data; the two rear aircrew were retained in other mission roles such as cargo transfer and rescue operations.[18] The cabin can accommodate up to 22 survivors or nine stretchers in addition to two medical officers in a SAR capacity; up to 28 soldiers can be accommodated when operated as a troop transport.[citation needed]

The Sea King features many design elements to support naval-orientated operations; the main rotor blades and the tail section could be folded for storage when deployed onboard ships. An amphibious hull allows most Sea Kings to land on and remain on the ocean's surface as a matter of operational routine; for stability and increased flotation, the aircraft's sponsons contain deployable airbags for use when the Sea King planned to come into direct contact with the sea.[5]

Depending upon their intended mission, the armament fitted upon a Sea King could vary considerably. A typical armament configuration in an anti-submarine capacity could include up to four torpedoes or four depth charges. For anti-ship duties some models were outfitted to carry one or two missiles, typically Sea Eagles or Exocets.[19] The Sea King had also the option of being outfitted to deploy the B57 nuclear bomb.[20]

The Sea King became operational with the United States Navy in June 1961 as the HSS-2; the aircraft's designation subsequently changed to SH-3A when the unified aircraft designation system was introduced. It was used primarily for anti-submarine warfare, detecting and tracking Soviet submarines and, in time of war, would be used to attack enemy submarines as well.[23] Night-time ASW operations were possible, with considerable difficulty.[24] The Sea King was widely exported, particularly for its anti-submarine capabilities, and was operated in large numbers by several nations, including Brazil, Italy, Japan and the United Kingdom.[25]

The Sea King also performed various other roles and missions such as search and rescue, transport, anti-shipping and airborne early warning operations. Aircraft carriers would typically deploy Sea Kings to operate in the close vicinity of the carrier in order to act as a plane guard, ready to respond to another aircraft that crashed during takeoff or landing.[26] Providing a safety margin for other operations, and transferring personnel and mail in between vessels were routine, if less prestigious, duties for the US Navy Sea Kings.[24]

During the Vietnam War, SH-3s were used to rescue the crews of downed aircraft both at sea and over land; the Sea Kings were regularly tasked with retrieval operations in hostile territory were outfitted with self-sealing fuel tanks, machine guns and armor.[27] The Sea King has significantly useful for medical evacuations and disaster relief efforts throughout its service life.[24]

The SH-3 became the primary helicopter for the retrieval of manned space capsules, starting with the recovery of Mercury-Atlas 7 in May 1962.[28] In February 1971, a SH-3A, operating from the amphibious assault ship USS New Orleans, performed the recovery mission of Apollo 14.[29] A specialist search and rescue variant of the SH-3, the HH-3, also performed in this capacity.[5]

During the 1990s, the Sea King was replaced in the ASW and SAR roles by the U.S. Navy with the newer Sikorsky SH-60 Sea Hawk.[34] However, the SH-3 continued to operate in reserve units in roles including logistical support, search and rescue, and transport. On 27 January 2006, the SH-3 was ceremonially retired at NAS Norfolk, Virginia, by Helicopter Combat Support Squadron 2 (HC-2).[35] They have been replaced by increasingly advanced variants of the SH-60 Sea Hawk.[24]

CH-124
Anti-submarine warfare helicopter for the Royal Canadian Navy (41 assembled by United Aircraft of Canada).[42]
CH-124A
The Sea King Improvement Program (SKIP) added modernized avionics as well as improved safety features.[42]
CH-124B
Alternate version of the CH-124A without a dipping sonar but formerly with a MAD sensor and additional storage for deployable stores. In 2006, the five aircraft of this variant were converted to support the Standing Contingency Task Force (SCTF), and were modified with additional troop seats, and frequency agile radios. Plans to add fast-rope capability, EAPSNIPS (Engine Air Particle Separator / Snow & Ice Particle Separator) did not come to fruition.[42]
CH-124B2
Six CH-124B's were upgraded to the CH-124B2 standard in 1991–1992. The revised CH-124B2 retained the sonobuoy processing gear to passively detect submarines but, the aircraft was now also fitted with a towed-array sonar to supplement the ship's sonar. Since anti-submarine warfare is no longer a major priority within the Canadian Forces, the CH-124B2 were refitted again to become improvised troop carriers for the newly formed Standing Contingency Task Force.[42]
CH-124C
One CH-124 operated by the Helicopter Operational Test and Evaluation Facility located at CFB Shearwater. Used for testing new gear, and when not testing new gear, it is deployable to any Canadian Forces ship requiring a helicopter.[42]
CH-124U
Unofficial designation for four CH-124s that were modified for passenger/freight transport. One crashed in 1973, and the survivors were later refitted to become CH-124A's.[42]

The Westland Sea King variant was manufactured under license by Westland Helicopters Ltd in the United Kingdom, who developed a specially modified version for the Royal Navy. It is powered by a pair of Rolls-Royce Gnome turbines (license-built T58s), and has British avionics and ASW equipment. This variant first flew in 1969, and entered service the next year. It is also used by the Royal Air Force in a search and rescue capacity, and has been sold to many countries around the world. 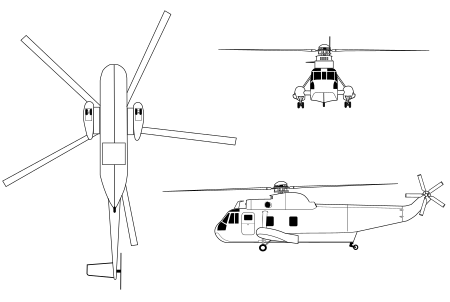