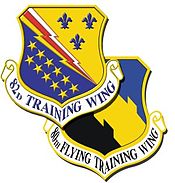 Sheppard Air Force Base (IATA: SPS, ICAO: KSPS, FAA Location identifier: SPS) is a United States Air Force base located five miles (8 km) north of the central business district of Wichita Falls, in Wichita County, Texas, United States. It is the largest training base and most diversified in Air Education and Training Command. The base is named in honor of Texas Senator John Morris Sheppard, a supporter of military preparations before World War II.

The host unit at Sheppard is the 82d Training Wing (82 TRW), which provides specialized technical training, medical, and field training for officers, Airmen, and civilians of all branches of the military, other DoD agencies, and foreign nationals.

The host unit on Sheppard Air Force Base is the 82nd Training Wing whose mission makes it the most diversified training base within the Air Education and Training Command. For more than 70 years, the men and women of Sheppard AFB have ensured that America's Airmen have the skills they need to succeed in combat. Today, Sheppard's training influence reaches around the globe. The 82 TRW is a non-flying wing that conducts all technical training at Sheppard. The 982d Training Group, under the 82 TRW, provides instruction in a wide range of specialties at Sheppard and also at more than 60 Air Force installations worldwide. The 82d Mission Support Group (82 MSG) and the 82 Medical Group (82 MDG) support these organizations.

The 80th FTW mission is to provide combat airpower by producing top quality fighter pilots for the NATO alliance. It is home of the Euro-NATO Joint Jet Pilot Training (ENJJPT) Program. It is a uniquely manned multinational organization with a USAF wing commander and a German Air Force operations group commander in the top two leadership positions. Command and operations officers' positions in the flying training squadrons rotate among the participating nations, while the commander of the 80th Operations Support Squadron is always from the USAF.

Additionally, officers from all 13 participating nations fill subordinate leadership positions throughout the wing. Nine nations—Belgium, Denmark, Germany, Italy, The Netherlands, Norway, Turkey,Spain and the United States—provide instructor pilots based on their number of student pilots. Canada, Greece, Portugal, and the United Kingdom do not have student pilots in training, but do provide one instructor pilot. As an example of this totally integrated structure, an American student pilot may have a Belgian instructor pilot, a Dutch flight commander, a Turkish section commander, an Italian operations officer, and a German squadron commander.

Sheppard Air Force Base is named in honor of Senator John Morris Sheppard of Texas (1875–1941), chairman of the Senate Military Affairs Committee from 1933 until his death on 9 April 1941. Senator Sheppard helped lead the fight for military preparedness before the attack on Pearl Harbor.

Sheppard AFB began providing top-notch instruction in a diverse array of Air Force specialties during World War II. The base began as Sheppard Field on 300 acres (1.2 km²) just south of Kell Field, named for the businessman Frank Kell. A Texas cattleman, oilman, and philanthropist, Joseph Sterling Bridwell, sold the land to the U.S. Army for one dollar.[1]

It was officially opened as an Army Air Corps training center on 17 October 1941, following the arrival of the first military members on 14 June. As the Army Air Corps became the Army Air Forces, facilities were completed sufficiently to allow the first class of 22 aviation mechanics to enter training that October; the class graduated 23 February 1942.

Sheppard Field reached its peak strength of 46,340 people while serving as a separation center for troops being discharged following World War II from September through November 1945. Sheppard Field was deactivated 31 August 1946 and declared surplus to the War Department's needs. It was transferred to the jurisdiction of the Corps of Engineers 30 April 1947. Over the next two years the National Guard used the base.

Control and accountability for Sheppard Field was transferred to the Department of the Air Force 1 August 1948 and was reactivated 15 August 1948 to supplement Lackland AFB, Texas, as a basic training center renamed as Sheppard AFB. Basic training was discontinued in June 1949, but was resumed from July 1950 to May 1952.

Over the next three decades three training schools were stationed at the base training students in aircraft maintenance, transportation, communication, civil engineering, Aircrew Life Support and field training.

The aircraft mechanics school was transferred to Sheppard from Keesler AFB, Mississippi in April 1949 to make room for expansion of electronic training at that base. The school was renamed the Department of Aircraft Maintenance Training within the 3750th Technical School. During the Korean War (1950–1953) several airmen from such places as Greece and Turkey were trained as mechanics.

Comptroller, transportation, and intelligence training moved to Sheppard from Lowry AFB, Colorado, in the fall of 1954. Communications, refrigeration, air conditioning, and power production operator and repairman training were transferred here from F.E. Warren AFB, Wyoming in 1959. Intelligence training returned to Lowry in February 1962. Training in certain missile systems began at Sheppard in 1957 and was conducted there through September 1985 when Titan II training operations were terminated following that weapon system's retirement.

Helicopter pilot training was transferred from Stead AFB, Nevada in October 1965, with H-19, H-43, Bell TH-1F, CH-3C and HH-3E helicopters used for training. Additional training in airborne firefighting was also conducted, given the role of the USAF HH-43 aircraft as a local rescue and aircraft firefighting asset at selected air force bases in the United States and at air bases overseas.

The 3630th Flying Training Wing was activated in 1965, and it assumed the helicopter training program. It began providing undergraduate pilot training in the T-37 and T-38 for the then-West German Air Force (Luftwaffe) in August 1966. Helicopter training was discontinued in 1971 when the U.S. Army assumed responsibility for training Air Force helicopter pilots at Fort Rucker, Alabama.

The Air Force School of Health Care Sciences offered training in dentistry, medicine, nursing (to include flight nurse training), and health-services administration. The population of the base had declined to 3,825 in 1990.

In February 1992, restructuring and downsizing of the Air Force caused a realignment and renumbering of units at Sheppard. Some of the training wings were redesignated as groups, and the technical training groups became squadrons.

Between 1960 and 1966 the Strategic Air Command (SAC) had training units stationed at the base that conducted aerospace rescue schools and weather instruction. In addition, The 494th Bombardment Wing, a Strategic Air Command operational wing of B-52D Stratofortress bombers and KC-135A Stratotanker aircraft, previously designated as the 4245th Strategic Wing, was based at Sheppard from 1963 to 1966.

In July 1969, Detachment 1, 2nd Bombardment Wing, with four B-52 aircraft, became a tenant organization at Sheppard and remained until 1975. These aircraft rotated as part of SAC’s dispersal concept and utilized the SAC Alert Facility on the northwest end of the airfield.

The Department of Defense (DoD) proposed a major realignment of the base, as part of the Base Realignment and Closure program announced on 13 May 2005. DoD recommended to relocating to Eglin AFB, Florida, front-line and instructor-qualified maintenance technicians and logistics support personnel to stand up the Air Force’s portion of the F-35 Lightning II (Joint Strike Fighter) Initial Joint Training Site there. This recommendation would establish Eglin Air Force Base as the Initial Joint Training Site that would teach entry-level aviators and maintenance technicians how to safely operate and maintain the new F-35 Lightning II, also known as the Joint Strike Fighter (JSF) aircraft. Assuming no economic recovery, this recommendation could result in a maximum potential reduction of 487 jobs (295 direct jobs and 192 indirect jobs) over 2006–2011 in the Wichita Falls, TX, Metropolitan Statistical Area (0.5 percent).[2]